U.S. President Donald Trump’s decision to withdraw from the nuclear deal with Iran and reimpose sanctions on that country is spurring Europe to block U.S. measures and shore up support to sustain the agreement.

By pulling out of the 2015 multilateral nuclear agreement, Trump delivered on a campaign promise to “tear up” the deal with Iran, which he has frequently disparaged as the “worst deal ever negotiated.” In doing so, he rebuffed personal last-minute appeals by French President Emmanuel Macron and German Chancellor Angela Merkel during their visits to the White House in late April. 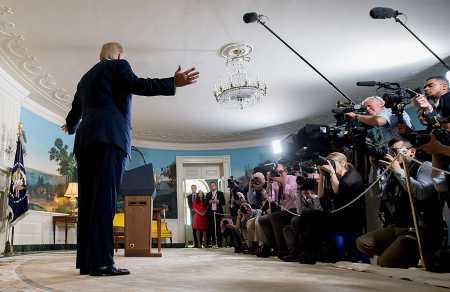 Trump said on May 8 that if he “allowed this deal to stand, there would soon be a nuclear arms race in the Middle East.” Trump said the process he initiated in January to work with European partners to “fix” the accord is not possible under the “decaying and rotten structure of the current agreement,” despite U.S. Secretary of State Mike Pompeo telling allies days before the announcement that he felt an agreement could be reached to address U.S. concerns. (See ACT, March 2018.)

Following up the president’s action, Pompeo in a May 21 speech outlined a broad list of demands on Iran and said the United States will impose the “strongest sanctions in history” to force Iran to end certain nuclear activities and missile programs, aid to the Syrian regime and support for militant groups in the region. The set of demands, stopping just short of an explicit call for regime change, sets the stage for further U.S. tensions with European allies and the Islamic Republic.

Even before Pompeo’s policy speech, Trump’s announcement earned sharp rebukes from Washington’s partners in the agreement, as well as the European Union, and commitments by those nations to continue implementing the accord. The extent to which that is possible is unclear, given that major foreign companies face being cut off from the U.S. banking system and other punishment if they do not adhere to U.S. sanctions on Iran.

European Council President Donald Tusk was particularly direct in his criticism, tweeting on May 16 that “[l]ooking at the latest decisions of President Trump, someone could even think: With friends like that, who needs enemies?”

Iranian President Hassan Rouhani reiterated Iran’s commitment to continue abiding by the agreement, so long as Iran’s national interests are met, and said he was pleased that “the troublesome member has been eliminated” from the deal.

But Iranian Supreme Leader Ayatollah Ali Khamenei said that he wants to see “definite reassurance” and “practical guarantees” that Iran will receive the sanctions relief envisioned under the deal.

Federica Mogherini, the EU foreign policy chief, said that guarantees are not possible but that the EU is determined to “act in accordance with its security interests and to protect its economic investments.” She met on May 15 with Iranian Foreign Minister Javad Zarif and the foreign ministers of France, Germany, and the UK to discuss moving forward without the United States.

Subsequently, at a May 17 meeting of the European Commission, the body agreed to take steps in response to Trump’s reimposition of sanctions, including revising a blocking statute used by the EU in the 1990s to protect entities from U.S. sanctions on Cuba. The blocking regulation “forbids EU companies from complying with the extraterritorial effects of U.S. sanctions, allows companies to recover damages arising from such sanctions from the person causing them, and nullifies the effect in the EU of any foreign court judgements based on them,” according to a May 17 press release.

The EU is aiming to have the measure in force by Aug. 6, the day some U.S. sanctions go into effect. Although the United States has reimposed sanctions, the U.S. Department of the Treasury announced on May 8 that entities would be given 90 or 180 days to wind down activities in Iran before sanctions would be enforced.

For large, multinational companies with a significant presence in the United States, the blocking regulation is unlikely to provide enough assurance for them to remain in the Iranian market. Several announced that they are winding down business in Iran and exiting contracts.

The regulation sends a strong political signal, however, and may provide cover for smaller businesses with less of a presence in the United States to continue doing business in Iran. The EU also launched a process whereby the European Investment Bank will be able to support investment activities in Iran.

EU measures to blunt the impact of sanctions call into question Trump’s plan to pressure Iran back to negotiations. Brian Hook, State Department director for policy planning, in a May 18 press conference described the goal of sanctions reimposition as creating “necessary pressure to bear on Iran to change its behavior and to pursue a new framework” that addresses Iran’s ballistic missile development and its support for terrorism, as well as its nuclear program.

In the lead up to the 2015 nuclear agreement, known formally as the Joint Comprehensive Plan of Action (JCPOA), EU sanctions and EU compliance with U.S. sanctions were a critical part of the pressure campaign that pushed Iran to negotiate. With the EU and China, Russia, and other states retaining business ties with Iran, it is unlikely that the United States will be able to press Iran into new negotiations.

Iran has left open the option to resume troublesome nuclear activities in response to the U.S. violation and withdrawal from the deal. In a move likely meant to signal that Iran will leave the JCPOA if the remaining parties to the agreement cannot deliver on sanctions relief, Rouhani ordered the Atomic Energy Organization of Iran (AEOI) to be “fully prepared for subsequent measures if needed, so in the case of need, we will start up our industrial enrichment without limitations.”

Other Iranian officials, including AEOI head Ali Akhbar Salehi, have specifically said Iran would resume enriching uranium to 20 percent uranium-235, a level that would put Tehran closer to the 90 percent U-235 required for use in nuclear weapons.

Under the JCPOA, Iran is limited to enriching uranium to 3.67 percent U-235, a level suitable for nuclear power reactors, using no more than 5,060 installed centrifuges. The accord also limits Iran to a stockpile to 300 kilograms of uranium enriched to that level, a measure to hinder any nuclear-bomb effort.

Yukiya Amano, director-general of the International Atomic Energy Agency, confirmed on May 8 that Iran is meeting its commitments under the accord, and the agency’s May 24 quarterly report on Iran’s nuclear activities further confirmed that Tehran had not taken any steps to violate the deal after Trump withdrew.