The United States and North Korea engaged in diplomatic brinkmanship over a prospective summit meeting, after provocative remarks by top U.S. officials citing the “Libya model” for disarmament drew a strong pushback from Pyongyang.

For days, it was unclear whether the resulting decision by U.S. President Donald Trump to cancel the historic meeting with North Korean leader King Jong Un would be a serious breakdown, raising the risk of military conflict, or a temporary setback as each side sought advantage ahead of an eventual summit. 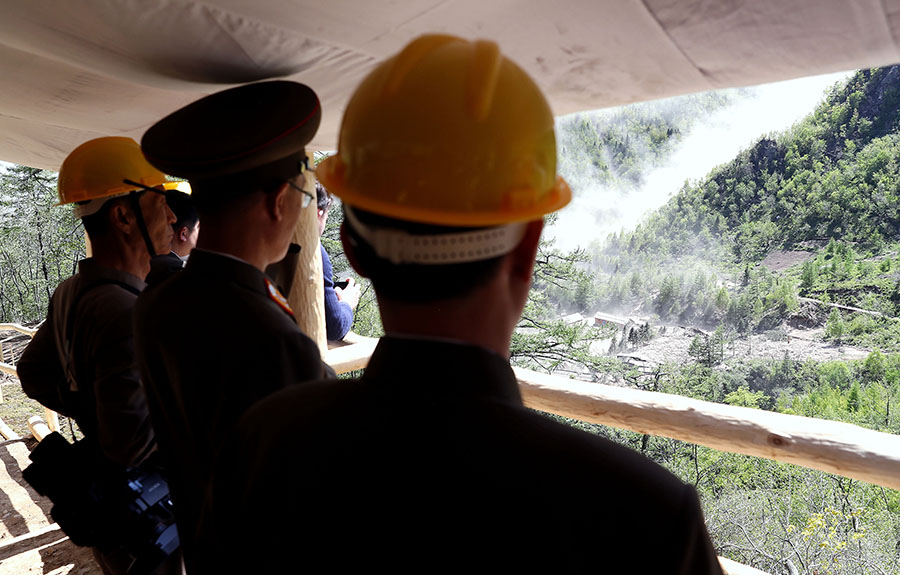 Less than 24 hours after his cancellation, and following a conciliatory public reaction from Pyongyang, Trump said that the two sides were talking, and summit planning resumed with both leaders signaling they wanted the meeting.

Asked if North Korea had been playing games, Trump said, “Everybody plays games.” And an official North Korean statement, following an emergency meeting May 26 between Kim and South Korean President Moon Jae-in, said Kim had expressed his “fixed will” to meet with the U.S. president.

It appeared that Trump wanted to look strong by aborting summit plans rather than risk being dumped, after preparations were upset following remarks from Pence and Trump’s new national security adviser, John Bolton, both hard-liners on North Korea.

In a Fox News interview May 21, Pence warned that North Korea’s government could end like that of Moammar Gaddafi, the former Libyan leader who was killed during a U.S.-backed uprising in 2011, if Kim does not agree to rapid elimination of its nuclear weapons and related infrastructure. Asked if he was threatening Kim, Pence said, “I think it’s more of a fact.”

In her statement, Choe said, “Whether the U.S. will meet us at a meeting room or encounter us at nuclear-to-nuclear showdown is entirely dependent upon the decision and behavior of the United States.”

Trump, in his cancellation letter to Kim made public, said, “I feel it is inappropriate, at this time, to have this long-planned meeting.” He thanked Kim for the “beautiful gesture” of releasing of three American prisoners and left open the possibility of meeting at a later time.

Trump also included a less-than-subtle threat: “You talk about nuclear capabilities, but ours are so massive and powerful that I pray to God they will never have to be used.”

North Korean First Vice Foreign Minister Kim Ky Gwan, responding to Trump’s announcement, said North Korea was ready to talk with the United States “at any time.” He said that North Korea’s earlier comments were “just a reaction to the unbridled remarks made by the U.S. side” and that Trump’s unexpected cancellation may be a sign that he lacked the will or confidence to attend the summit.

The cancellation appeared to catch South Korea off guard despite Moon’s White House meeting with Trump just 48 hours earlier. Moon called the cancellation “regretful and disconcerting,” and he subsequently met with Kim May 26 in an effort to get the summit back on track.

A summit has the potential to be a major diplomatic achievement for Trump, who has advocated a Nobel Peace Prize for himself. But it also holds peril given his shortcoming in dealing with the complexities of nuclear negotiations and his need to produce an agreement more demanding than the rigorous Iran nuclear deal he repudiated and abandoned.

The cancellation by Trump came just hours after North Korea, acting on one of its unilateral promises, blew up tunnels at its Punggye-ri underground nuclear test site. The government did not bring in inspectors from the Comprehensive Test Ban Treaty Organization (CTBTO) to assess the extent to which the site is no longer usable.

The Trump administration stumbled in its policy coordination, with Pence and Bolton citing the provocative “Libya model” while the president himself publicly indicated flexibility for the timing of disarmament steps. Bolton told CBS on April 28 that the Trump administration is “looking at the Libya model,” which would require Kim to give up his nuclear weapons program quickly before any concessions are granted.

Libya never possessed nuclear warheads, but pursued an illicit nuclear weapons development program, which it gave up in 2003 and dismantled under the presence of inspectors. (See ACT, January/February 2004.) When that process was completed, the United States lifted sanctions in 2004.

That case, however, is freighted with symbolism for North Korea’s leadership since Gaddafi was toppled and killed seven years later by U.S.-aided rebel forces. For North Korea, the nuclear weapons program is seen as a powerful deterrent against U.S. attack, as well as an assertion of its concept of radical self-reliance known as juche.

Kim Ky Gwan said on May 16 that it is “absolutely absurd to dare compare” North Korea with Libya. The U.S. remarks are an “awfully sinister move to impose on our dignified state the destiny of Libya or Iraq, which had been collapsed due to yielding the whole of their countries to big powers,” he said.

If Washington insists on forcing “unilateral nuclear abandonment,” Pyongyang will no longer be interested in dialogue, he said.

Trump muddied the waters about the U.S. approach to negotiations the following day, when he downplayed the Libya model. His comments, however, made clear he did not understand that Bolton was referring to the 2003 nuclear dismantlement agreement.

Trump said that, “in Libya, we decimated that country,” likely referring to the NATO intervention in 2011 and the death of Gaddafi. He said that if an agreement is reached, Kim will remain in North Korea “running that country.” But Trump warned that North Korea would face the same fate as Libya “if we don’t make a deal.” North Korea did not respond publicly Trump’s comments, instead focusing on Pence and Bolton.

During the surprise U.S.-North Korean diplomacy this year, one challenge has been the differing interpretations of “denuclearization,” which the United States regards as the complete, verifiable elimination of North Korea’s entire nuclear weapons infrastructure. For its part, Pyongyang views denuclearization as a two-sided process that includes U.S. nuclear weapons that are part of Washington’s core defense commitment to allies South Korea and Japan. (See ACT, May 2016.)

A comprehensive agreement that addresses North Korea’s entire program in one step may sound appealing, in that it would address the legitimate concern that Pyongyang is just buying time and is not serious about denuclearization. Yet, the size of North Korea’s nuclear program and the role its warheads play in the state’s security make the approach less feasible.

Unlike Libya, North Korea possesses a stockpile of weapons-usable material, 10 to 20 nuclear warheads, plutonium- and uranium-production facilities, a nuclear testing site, and a variety of ballistic missiles capable of delivering nuclear warheads against targets in the region and in the United States. North Korea also has a history of cheating on its nuclear declarations to the International Atomic Energy Agency. Even in the Libya case, when Tripoli was cooperating with dismantlement efforts, some materials were missed during the dismantlement process.

Beyond North Korea’s explicit rejection of an approach that requires “abandoning nuclear weapons first, compensating afterward,” Pyongyang’s characterizes its nuclear weapons as a deterrent against U.S. policy. Putting that deterrent on the table ahead of U.S. action to reduce the “hostile policy” toward North Korea is highly unlikely.

An alternative to the Libya model is a step-by-step approach with reciprocal actions. Under this approach, the United States and North Korea would agree on overarching goals at the onset, then pursue a phased action-for-action strategy that exchanges steps toward dismantlement for security assurances and economic relief.

North Korea appears to favor that model. In his May 25 statement, Kim Ky Gwan said “the first meeting will not solve all, but solving even one at a time in a phased way” would improve the relationship.