A number of legislatures are taking steps for ratification of the Treaty on the Prohibition of Nuclear Weapons, while some other states, including two NATO members, are launching studies on the implications of ratifying the landmark treaty opposed by the major nuclear powers. 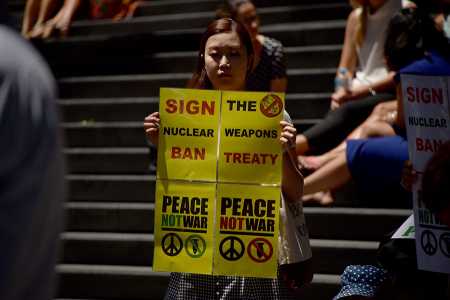 Ireland is drafting treaty-implementation legislation, which could pass before the parliamentary recess in July. Campaigners in Ireland are advocating inclusion of the treaty’s prohibition of assistance with banned activities in the implementing legislation, which could mean limiting foreign investment in companies whose products or action contribute to nuclear arsenals.

Costa Rica’s legislative assembly voted unanimously March 15 for legislation in support of ratifying the treaty. Tim Wright, treaty coordinator at the International Campaign to Abolish Nuclear Weapons (ICAN), expects Costa Rica to ratify the treaty in the coming weeks. “We expect to see more ratifications from Latin America in the near future,” Wright told Arms Control Today in an April 17 interview.

Brazilian President Michel Temer is working to have Brazil ratify the treaty by the end of the year, Christian Vargas, deputy chief of mission at the Brazilian embassy in Washington, told the Arms Control Association annual meeting April 19.

In a February speech to the New Zealand Institute of International Affairs, New Zealand Prime Minister Jacinda Ardern stated she would pursue “early ratification” of the prohibition treaty. But an official in the New Zealand Ministry of Foreign Affairs and Trade told Arms Control Today in an April 18 email that no parliamentary process to do so had commenced.

The Marshall Islands, where there is strong domestic support for nuclear disarmament derived from the environmental and humanitarian impact of past U.S. nuclear testing there, has begun its legislative process on the treaty. A member of the Nitijela, the islands’ legislative body, submitted a resolution in September 2017 calling for the signature and ratification of the prohibition treaty. The resolution is currently in parliamentary committee.

The committee has held one public hearing, as of mid-March, but plans to hold more, said Bonnie Docherty, lecturer on law at Harvard Law School in an email to Arms Control Today. The committee aims to release its report to the Nitijela in August so that a vote on the resolution can take place before elections in November 2019.

Some officials are concerned about the compatibility of the treaty with the Marshall Islands’ 2003 Amended Compact of Free Association with the United States. The compact guarantees U.S. defense of the island nation in exchange for its promise not to take any action that the United States deems to be against its “responsibility for security and defense matters” in the Marshall Islands. (See ACT, September 2017.) Docherty contends that the two agreements are compatible.

In Switzerland, a member of parliament introduced a motion Dec. 12 requesting that the country sign the treaty “as soon as possible” and submit it to parliament for ratification “without delay.” A National Council vote, originally planned for March 15, had to be rescheduled and will likely occur during the summer session from May 28 to June 15, according to Maya Brehm, adviser to the group Article 36, in an email to Arms Control Today.

The Swiss government recommended Feb. 21 that the parliament reject the motion, citing a “need to clarify important technical, legal and political questions.” The government raised concerns that some treaty provisions “may not be verifiable or that the treaty could weaken existing standards, instruments or forums.” It also stated that it could not sign the treaty before completion of an interdepartmental analysis of the treaty, which is expected by July.

Other states are also launching studies into the implications of joining the treaty.

“A process to achieve a ban on nuclear weapons that is not supported by any of the countries that actually have weapons of this kind will not, unfortunately, advance the disarmament agenda,” asserted Audun Halvorsen, state secretary at the Norwegian Ministry of Foreign Affairs, in an April 18 email to Arms Control Today. The prohibition treaty “is not compatible with our NATO obligations. None of our NATO allies support the prohibition of nuclear weapons, and it is not appropriate for Norway to sign a treaty that could undermine NATO’s position as a defense alliance. However, the government is now following up parliament’s request to examine what the consequences of signing the [treaty] would be.”

The study’s conclusions will be available by the end of 2018, Halvorsen added.

Iceland, another NATO member, is also looking into the implications of joining the treaty, according to Wright. Iceland’s new prime minister, Katrín Jakobsdóttir, who took office in November, is a member of the Left-Green movement and, although still a member of parliament, signed ICAN’s parliamentary pledge to work toward the treaty’s signature
and ratification.

An official in the prime minister’s office, in an email to Arms Control Today, did not comment on Jakobsdóttir’s current views on prohibition treaty ratification. The official underlined Iceland’s commitment to the nuclear Nonproliferation Treaty and the country’s desire to see progress on nuclear weapons reductions.

“With Katrín Jakobsdóttir as prime minister, Iceland is in a strong position to join the treaty and lead other NATO countries to support real steps towards nuclear disarmament,” Ray Acheson, director of the group Reaching Critical Will, said in November 2017 after Jakobsdóttir attended a talk she and Wright gave in support of the treaty.