– George Stephanopolous
ABC News
January 1, 2005
The Art of the Summit

“North Korea just stated that it is in the final stages of developing a nuclear weapon capable of reaching parts of the United States,” President-elect Donald Trump tweeted a day after leader Kim Jong Un’s New Year’s Day speech in 2017. “It won’t happen.”

By stopping nuclear and missile testing just short of having a proven thermonuclear weapon and an intercontinental ballistic missile (ICBM) to deliver it to all of the United States, Kim has made it possible for Trump to achieve his wish, but only if he is prepared to sustain negotiations and live up to his commitments. By contrast, if Trump follows advice to confront Kim at the summit with an ultimatum to disarm or else, North Korea could resume testing. 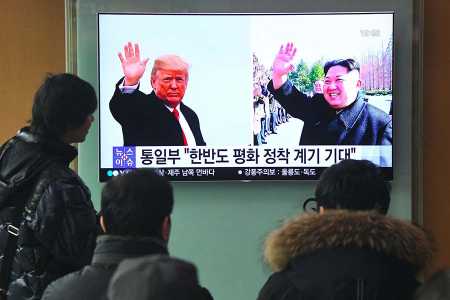 Whether Kim may be willing to disarm and what he will want in return is a matter of mere speculation. Concrete proposals for reciprocal steps and diplomatic give-and-take is the only way to find out.

If Trump wants a successful summit, he will seek a statement of principles in which Kim commits to denuclearization and to take some specific steps toward that end. Kim may be willing to make such a commitment to denuclearize, Trump’s ultimate goal; but in return, he will want Trump to pledge an end to enmity. That has been North Korea’s aim ever since 1988, when Kim’s grandfather, Kim Il Sung, anticipating the Soviet Union’s collapse, reached out to reconcile with the United States, South Korea, and Japan in order to avoid overdependence on China.

For Pyongyang, that aim was the basis of the 1994 Agreed Framework and the September 2005 six-party joint statement. For Washington, the point of these agreements was suspension of Pyongyang’s nuclear and missile programs. Under the Agreed Framework, North Korea shuttered production of fissile material and stopped test launches of medium- and long-range missiles for nearly a decade and did so again from 2007 to 2009. Both agreements collapsed, however, when Washington did little to implement its commitment to reconcile and Pyongyang reneged on denuclearization.

That past is prologue. The most urgent step now is to induce North Korea to suspend production of fissile material. Without it, a North Korean commitment not to proliferate would not be as valuable. Remote monitoring may prove of some use at known production facilities, but delaying suspension to negotiate detailed verification would allow time for more plutonium and highly enriched uranium (HEU) to be produced in the interim. A starting point would be for North Korea to declare how much potential bomb fuel, that is, plutonium and HEU, it has produced and how many nuclear weapons it has. That declaration would be subject to subsequent verification. Beyond a shutdown of fissile material production, Trump might seek a halt to new deployments of intermediate- and intercontinental-range missiles, which also can be monitored remotely.

In return, Kim will want evidence that Trump is willing to reconcile. The Trading With the Enemy Act sanctions imposed before the nuclear issue arose could be relaxed yet again, and energy assistance, unilaterally halted by South Korea in 2008, could be resumed. Verification will require more steps to end enmity, including a commitment to diplomatic recognition starting with an exchange of liaison offices, a pledge by Washington to begin a peace process in Korea, and more energy aid. South Korea could halt its development of a new 300-kilometer-range ballistic missile and allow reciprocal inspections of sites the North suspects host nuclear weapons.

Such a standstill agreement would enable Trump to claim the success he wants. If he demands too much, however, he could torpedo the summit.

The odds of persuading North Korea to go beyond another temporary suspension and dismantle its nuclear and missile production facilities are slim without firm commitments from Washington and Seoul to take more far-reaching steps toward political and economic normalization, engage in a peace process to end the Korean War, and negotiate regional security arrangements, among them a nuclear-weapon-free zone that would provide a multilateral legal framework for denuclearization.1

Dismantling production facilities and disarming will take years, as will convincing steps toward reconciliation. Only then will it become clear whether Kim is willing to give up his weapons.

If negotiations fail to stop North Korea from arming, the United States and its allies can continue to rely on deterrence. Yet, some steps each side takes to bolster deterrence raise the risk of deadly conflict, as shown by the March 2010 sinking of the South Korean corvette Cheonan in retaliation for the South firing on a North Korean naval vessel the previous November and the subsequent exchange of artillery fire in the West Sea.

So even then, the United States will need to complement deterrence with diplomatic engagement to reduce the risk of war, just as it took the Cuban missile crisis to get the United States and the Soviet Union to negotiate in earnest.