“What's really strikes me about ACA is the potential to shape the next generation of leaders on arms control and nuclear policy. This is something I witnessed firsthand as someone who was introduced to the field through ACA.”
– Alicia Sanders-Zakre
ICAN
June 2, 2022
Hawkish Advisers Get Key Trump Roles

President Donald Trump’s national security team has taken on a more hawkish profile with the addition of former UN Ambassador John Bolton, who has advocated regime change in Iran and military strikes against North Korea, as national security adviser and CIA Director Mike Pompeo, an outspoken critic of the Iran nuclear deal, as secretary of state. 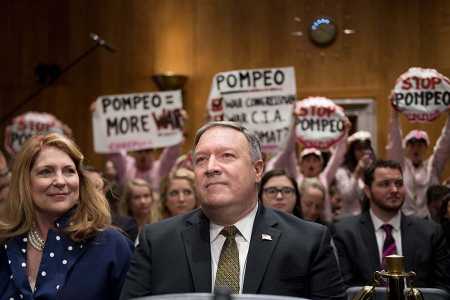 In his second overhaul of his national security team, Trump has shown his diminishing patience for those around him urging caution or offering opinions at odds with his own, as demonstrated by his unceremonious dumping of Secretary of State Rex Tillerson and respected national security adviser Army Lt. Gen. H.R. McMaster. Senate Democrats said the latest air strikes against Syrian chemical weapons-related targets, undertaken without specific authorization by Congress, added to their fears about the use of military force by the president and his new advisers.

“A vote for Mr. Pompeo is a vote for Trump’s war cabinet,” said Sen. Jeff Merkley (D-Ore.), a member of the Senate Foreign Relations Committee.

Only a last-minute switch by former opponent Sen. Rand Paul (R-Ky.) gave Pompeo an endorsement by the committee, and he went on to win confirmation by the Senate.

At his April 12 confirmation hearing, Pompeo, a West Point and Harvard Law School graduate, fielded questions about how he would address perils involving Russia, North Korea, Iran, China and elsewhere. But the subtext for many of the questions had to do with managing the volatile situation closer to home, just two miles down Pennsylvania Avenue at the White House.

As the United States faces an array of dangerous challenges, Democratic senators questioned whether Pompeo, the CIA director for just more than a year, would lower the risks that an impulsive Trump might stumble into a war. Sen. Robert Menendez (D-N.J.), the committee’s ranking member, was blunt: “Will you stand up to President Trump and say ‘No, you are wrong in that view,’ or will you be a yes man?”

Although Chairman Bob Corker (R-Tenn.) and other Senate Republicans greeted his nomination with approval, except for military-intervention skeptic Paul, Corker told Pompeo that “it’s fair for our members to ask” about the nature of his likely influence on the president.

In some respects, Pompeo is an unlikely figure to moderate the president, given the hawkish and outspoken positions the former Kansas congressman has taken in the past.

In talking up his prospective role, Pompeo told the Senate panel that he would press to rebuild and re-energize a State Department diminished by budget cutbacks, high-level resignations, presidential neglect, and reduced influence under the enigmatic Tillerson, a former CEO of Exxon Corp. But Sen. Tim Kaine (D-Va.), who had voted to confirm Pompeo as CIA director, said April 15 that he found that pledge unconvincing. In opposing his confirmation, Kaine cited Pompeo’s strong opposition to the Iran nuclear deal and his support for Trump’s military action in Syria without first seeking congressional approval.

A president, in many instances, selects someone with a significant degree of bipartisan support for a post as the nation’s top diplomat, which can buffer U.S. foreign policy from the immediate pressures of domestic politics. Not so with Pompeo, who during his time in the House of Representatives was an outspoken partisan, politically attacking then-Secretary of State Hillary Clinton over alleged failures related to the 2012 terrorist attack in Benghazi, Libya, and denouncing President Barack Obama’s multinational agreement thwarting Iran’s capability to produce nuclear weapons. “I look forward to rolling back this disastrous deal with the world’s largest state sponsor of terrorism,” Pompeo tweeted in November 2016.

As CIA chief, Pompeo wrongly said the intelligence community had assessed that Russia’s involvement in the 2016 election had no impact on its outcome. His comment inaccurately reflected the intelligence community’s finding, which did not address the issue of impact on the outcome, although his assertion mirrored Trump’s false statements on the findings. In a sign of confidence in Pompeo, Trump dispatched him over Easter weekend, days before the confirmation hearing, on a then-secret trip to North Korea to work on arrangements for the anticipated high-stakes summit with leader Kim Jong Un.

“I think Mike Pompeo will go down as one of the great secretaries of state,” Trump said April 18 at a working lunch with visiting Japanese Prime Minister Shinzo Abe.

Yet, Trump may find he is facing an assertive tag-team duo on matters involving Russia, with Bolton and Pompeo advocates of taking a tough line toward Moscow and President Vladimir Putin. In prepared remarks for the Senate panel, Pompeo wrote that “Russia continues to act aggressively, enabled by years of soft policy toward that aggression.” The United States should “push back in each place and in every vector” against Russian challenges, he told senators.

Trump has advocated better relations, even saying in March that he hoped to meet with Putin “in the not too distant future” to address the arms race “that is getting out of control.” Pompeo was not asked to discuss U.S.-Russian arms control matters and did not offer any views.