May 2018
By Kelsey Davenport

As U.S. President Donald Trump threatens to break from the Iran nuclear deal, European officials are considering options to try to sustain the international agreement, an effort that some concede is unlikely to succeed.

Trump threatened in January to withhold waivers necessary to continue the sanctions relief granted under the deal unless France, Germany, and the United Kingdom, known collectively as the E3, reach an agreement with the U.S. administration to address what the president calls “flaws” in the nuclear accord by the May 12 waiver deadline. (See ACT, March 2018.) 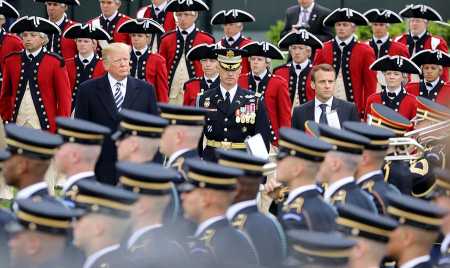 Since the January ultimatum, the E3 has been negotiating with the United States to reach an agreement that would satisfy Trump but not violate the deal. French President Emmanuel Macron and German Chancellor Angela Merkel, during separate visits to Washington in late April, each urged Trump to remain in the deal. Macron said there is no “plan B” alternative and Washington should remain in the agreement.

Despite Macron’s comments, EU foreign policy chief Federica Mogherini has said the European Union is considering what steps can be taken to maintain the nuclear accord if the United States reimposes sanctions or pulls out of the deal. Mogherini headed the P5+1 group (China, France, Germany, Russia, the UK, and the United States) that negotiated with Iran.

It is not clear whether the EU will be able to agree on measures to protect its banks and businesses from any reimposed U.S. sanctions. Even if the EU pursues these options, it is not clear they will provide enough economic incentives for Iran to stay in the deal.

The waivers that expire May 12 are tied to provisions in the National Defense Authorization Act for fiscal year 2012 that require countries purchasing oil from Iran to significantly reduce purchases every 180 days or face U.S. sanctions, which include cutting off from the U.S. financial system banks processing such transactions. Even if Trump takes the position that the United States will not immediately enforce the sanctions, countries such as China, India, Japan, and South Korea will have to begin planning to purchase less Iranian oil in anticipation of when the United States does begin to enforce the measures.

The EU is also a major purchaser of Iranian oil, and despite its commitment to stand by the deal, the measures available are unlikely to give European businesses and banks confidence that they can conduct legitimate transactions with Iran without the risk of being cut off from the U.S. financial system.

The EU can issue a blocking regulation, which would shield EU companies from U.S. extraterritorial measures, or try and set up dedicated channels to do business with Iran that are insulated from the U.S. financial system. The EU has used the blocking regulation in the past to protect against U.S. sanctions but in conjunction with a commitment from the United States not to pursue penalties against European businesses. Given Trump’s track record of trying to persuade entities to refrain from business with Iran, it is unlikely that such a guarantee would be issued.

Implementing the blocking regulation would also require consensus approval by the 28 EU states, some of which currently oppose the move because it is unlikely to be successful and risks aggravating the economic rift between the United States and the EU.

An official from one of the E3 states told Arms Control Today on April 18 that no company or bank will want to be the “first test case” and risk being cut off from the U.S. financial system. He said the best chance to sustain the deal is to reach an arrangement that addresses Trump’s concerns without violating the agreement, but he said he is increasingly pessimistic that the E3 and Iran can reach an arrangement by May 12 that Trump will accept.

U.S. and E3 officials met in Washington on April 11 to continue negotiations. Although progress was made on some areas of U.S. concern, such as ballistic missiles, “unreasonable demands” from the United States are complicating any compromise language on the timing for phasing out certain nuclear-related restrictions, the European official said. He added that European countries “cannot and will not commit to automatically reimposing sanctions” if Iran resumes permissible nuclear activities after limits expire.

Additionally, the official said European countries are still seeking commitments from the Trump administration that Washington will meet its obligations down the road and will refrain from making further demands. Even if an agreement is reached between E3 and U.S. officials, Trump’s unpredictability and his record of animosity toward the nuclear accord cast doubt on whether he will support it.

Further, Trump’s new national security adviser, John Bolton, and his new secretary of state, Mike Pompeo, have called for U.S. withdrawal from the agreement. Unlike their predecessors, who argued against breaking the deal, Bolton’s and Pompeo’s past comments suggest they are unlikely to urge Trump to accept what the E3 may offer.

If Trump refuses to waive sanctions, Iran may respond to the U.S. violation by breaching the deal’s constraints. Iranian Foreign Minister Mohammad Javad Zarif told CBS News’ Face the Nation broadcast April 22 that if the “benefits of the deal for Iran start to diminish, then there is no reason for Iran to remain in the deal.”

The “world cannot ask us to unilaterally and one-sidedly implement a deal that has already been broken,” Zarif said. Without going into the details of any specific steps, he said Iran’s options include “resuming at much greater speed our nuclear activities.”

One of those options is resuming levels of uranium enrichment now barred by the accord. Ali Akbar Salehi, head of the Atomic Energy Organization of Iran, said on April 21 that if a decision were made to resume enrichment to 20 percent uranium-235, it would only take Iran four days to begin doing so.

Under the accord, Iran is limited to enrichment levels below 3.67 percent U-235, suitable for fueling electric power reactors. Uranium enriched to 20 percent is not suitable for nuclear weapons, but would put Tehran significantly closer to the 90 percent-enriched U-235 necessary for a bomb.

Iran’s uranium enrichment to 20 percent and stockpiling of the material accelerated negotiations that led to the 2015 agreement curtailing Iran’s nuclear activities.