Lawmakers in March approved a record increase in spending on U.S. ballistic missile defense programs amid concern about the significant progress North Korea made last year to advance its ballistic missile capabilities.

Congress approved $11.5 billion for the Missile Defense Agency, an increase of $3.6 billion, or 46 percent, from the Trump administration’s May 2017 initial budget request. The appropriation is the largest Congress has ever provided for the agency after adjusting for inflation. 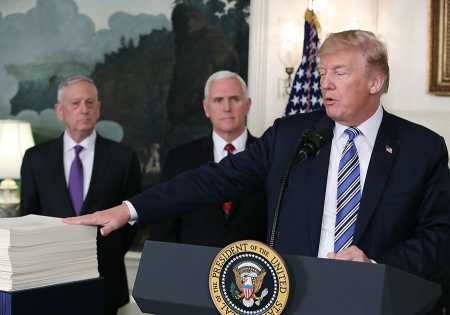 The law provides all of the extra $4 billion for missile defense programs requested by the administration in a November 2017 amendment to its fiscal year 2018 budget request. (See ACT, December 2017.) Trump said at a news conference at his golf club in Bedminster, New Jersey, last August that he would be increasing the missile defense budget “by many billions of dollars because of North Korea and other reasons having to do with” missile defense.

The Ground-Based Midcourse Defense system, designed to protect the United States against a limited intercontinental ballistic missile (ICBM) attack from North Korea or Iran, received $568 million more than the budget request to begin increasing the number of long-range missile defense interceptors by up to 20 beyond the currently deployed 44. Congress doled out $393 million more than requested to accelerate the development of a new, more effective kill vehicle to arm the interceptors.

In addition, the law provides $1.3 billion in extra funds for the purchase of additional interceptors for the Navy’s Aegis missile defense program and the Army’s Theater High Altitude Area Defense system.

The Defense Department is still conducting a congressionally mandated review of the U.S. approach to missile defense, which it began one year ago. (See ACT, May 2017.) The review report had originally been slated for completion in February, but the Pentagon now anticipates a May release.

The omnibus appropriations law is a nearly $1.3 trillion conglomeration of 12 appropriations bills that had to be passed to keep the government operating. For the first six months of the fiscal year, Congress passed a series of continuing resolutions that extended funding for most discretionary governmental programs at the previous year’s levels, although several programs, including some missile programs, received fresh funding at the fiscal year 2018 request level.

In February, Congress agreed to a new, two-year budget deal that lifted the spending cap on national defense funding for fiscal year 2018, imposed by the 2011 Budget Control Act, from $549 billion to $629 billion. That act places limits on discretionary spending, including military spending.

The omnibus law largely supports the Trump administration’s proposed budget request for programs to sustain and rebuild nuclear-armed missiles, submarines, and bombers and their associated nuclear warheads and supporting infrastructure.

The law includes $1.93 billion for the Navy’s Columbia-class ballistic missile submarine program, an increase of $44 million from the request level. The law provides the requested amounts of $216 million for the Air Force’s effort to develop a replacement for the Minuteman III ICBM system, an increase of almost $102 million over 2017 levels and $489 million for a new fleet of nuclear-capable air-launched cruise missiles, almost five times as much as Congress appropriated last year.

The law funds the nuclear-capable B-21 “Raider” bomber program at $20 million below the budget request level of $2.0 billion.

The law also provides $10.6 billion for nuclear weapons activities conducted by the National Nuclear Security Administration (NNSA), an increase of $1.4 billion, or 15 percent, from the fiscal year 2017 appropriation.

The law does not provide funding for the new nuclear capabilities proposed by the Trump administration’s Nuclear Posture Review report, which was released in February. These “supplements,” as the report describes them, include the near-term deployment of low-yield nuclear warheads on submarine-launched ballistic missiles (SLBMs) and, in the longer term, development of a new nuclear-armed sea-launched cruise missile.

The Defense Department’s budget request for fiscal year 2019, released Feb. 12, includes $22.6 million for developing the missile variant. The department plans to spend a total of $48.5 million on the effort over the next five years.

The proposed budget for the NNSA, which maintains nuclear warheads and their supporting infrastructure, initially did not include the funds needed to modify SLBM warheads. (See ACT, April 2018.) But the White House notified Congress on April 13 that it seeks to reallocate $65 million within the NNSA weapons budget to modify a small number of 100-kiloton W76-1 SLBM warheads to detonate at a less powerful yield.

The Congressional Budget Office estimated last fall that the plans Trump inherited from the Obama administration to maintain and upgrade the U.S. nuclear arsenal over the next 30 years would cost $1.2 trillion. (See ACT, December 2017.) The figure does not include the effects of inflation.

The law includes $2 billion for NNSA fissile material security and nonproliferation efforts, an increase of $206 million above the budget request and $116 million above last year’s appropriation. The additional funding supports stepped-up efforts to secure and eliminate radiological materials that could be used in a so-called dirty bomb and to minimize the use of highly enriched uranium to produce molybdenum-99, a medical isotope.

This increase could be short-lived. The Trump administration’s fiscal year 2019 budget request proposes to reduce funding for NNSA programs to secure and eliminate nuclear weapons-usable materials by $115 million, a 26 percent reduction from the omnibus level.