Robert Soofer, deputy assistant secretary of defense for nuclear and missile defense policy, told the Senate Armed Services Committee on April 11 that the review would begin soon and assess the “pros and cons” of extending the treaty. Expiration of the accord in 2021, without a replacement, would remove numerical caps on U.S. and Russian nuclear arsenals for the first time since the 1970s. 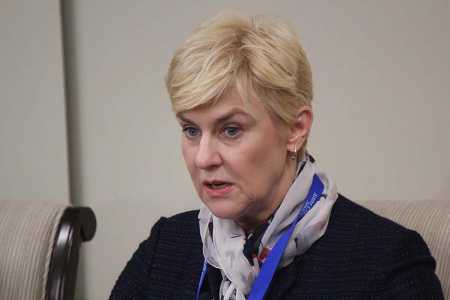 Anita Friedt, acting assistant secretary of state for arms control, verification, and compliance, told the Arms Control Association’s annual meeting April 19 that an extension “is something we’re looking at” but that there is no target date for the completion of the review. Friedt added that the administration will take into account Russian compliance with other arms control agreements when weighing whether to extend New START. The United States has accused Russia of being in violation of several arms control treaties and commitments, most notably the 1987 Intermediate-Range Nuclear Forces (INF) Treaty.

Signed in 2010, New START requires the United States and Russia each to reduce strategic nuclear forces to no more than 1,550 deployed warheads, 700 deployed delivery systems, and 800 deployed and nondeployed delivery systems by Feb. 5, 2018, a deadline that both countries met. The treaty also includes a comprehensive suite of monitoring and verification provisions to help ensure compliance with these limits.

New START is set to expire on Feb. 5, 2021, although, under its terms, it can be extended by up to five years without further approval by the U.S. Senate or Russian Duma if both presidents agree. (See ACT, January/February 2018.)

But U.S. President Donald Trump has criticized the treaty and, in a January 2017 phone call, responded negatively to a suggestion from Russian President Vladimir Putin that their countries work to extend the treaty, according to Reuters. In a March 1 interview with NBC’s Megyn Kelly, Putin said Russia is willing to have a dialogue with the United States about extending New START. (See ACT, March 2018.)

Friedt noted that if the treaty expires with nothing to replace it, “then we will have less insight” into Russia’s nuclear forces. But she hinted that the administration will take its time before making its decision. An early extension would not “necessarily help” improve the U.S.-Russian arms control relationship, she said. “We have until 2021, and I think we should look at it
very carefully.”

Some Republican members of Congress, such as Sen. Tom Cotton (Ark.), have expressed concern about a potential extension given Russia’s violation of other arms control agreements and development of new nuclear weapons delivery systems not limited by New START. “Given that set of circumstances, I think we should take a serious second look at extending” New START, he said at an April 11 Senate hearing.

The House-passed version of the fiscal year 2018 National Defense Authorization Act would have prohibited the use of funds to extend New START unless Russia returns to compliance with the INF Treaty. (See ACT, September 2017.) The final version of the authorization bill signed by Trump in December did not include that provision.