May 2018
By Bill Richardson

The planned summit between U.S. President Donald Trump and North Korean leader Kim Jong Un is good, important, and impressive, but it comes with a lot of risks. If the summit doesn’t succeed, the problem isn’t going to be a return to the status quo, where there was enormous tension, but something worse. 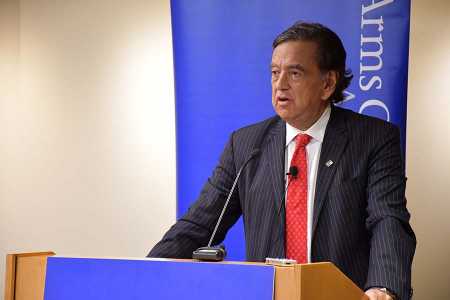 My concern is that the United States must be prepared, that the president must be prepared, and I worry sometimes that he’s not very prepared. I’ve been to North Korea eight times, and the North Koreans are disciplined, they’re prepared, they’re very inflexible, and they’re very formal. When you negotiate with them, they have their talking points, they vent, they’re hostile. They want you to listen to them, to show respect. Then, you respond. The key is on the sidelines, the informal. That’s where you make a personal connection. That’s where, maybe, you make a deal with them on detainees, on return of remains of U.S. servicemen, on an issue relating to food. It’s always informal. They don’t make it at the negotiating table. For that, Trump needs to be patient, restrained, and prepared.

The North Koreans’ idea of negotiating is not about a quid pro quo. While for us it is a quid pro quo, a compromise, the North Koreans feel they have divine guidance tied to the grandfather, father, and now Kim. Their idea of a concession is to give you a little time until you arrive at their position.

Further, denuclearization means a different thing to each country. To some in Washington, denuclearization of the Korean peninsula means Kim hands over his missile systems and his nuclear weapons, and he allows inspections to check that the regime is keeping its word. To the North Koreans, it means mutual steps, including requiring the United States to take down the nuclear umbrella over allies South Korea and Japan. Need to make a distinction between halting and ceasing their nuclear program, which is on the table, and disarming their existing arsenal, which I doubt is really on the table.

The danger of this summit comes from unrealistic expectations. The North Koreans are not going to hand over the keys to their kingdom. I believe that Trump is taking a gamble, but it is the correct gamble. I am for this summit. I am also for the meeting that the CIA Director Mike Pompeo had with the North Korean leader. Kim’s meeting with Pompeo has paved the way, I believe, for a positive summit. Trump has invested a lot in this summit, and so has Kim. The summit has to produce some results.

I think what we need is to keep expectations manageable. What is realistic? One, the return of the three detained Americans. I think that is a deliverable that would happen at the summit. Two, something that is very important to me, the return of remains of our soldiers from the Korean War. I brought seven remains back as an envoy for President George W. Bush in 2007. There are about 5,300 still in North Korea, and there are a lot of families out there that want to see these remains come home. Three, hopefully some South Korean-North Korean family reunifications and movement on human rights, which are doable. I hope that happens. Finally, on the nuclear side, I think we’ve got to set up a process of negotiation. The deal that the North Koreans will likely agree to includes halting and ceasing their nuclear and missile programs, in return for significant adjustments to the U.S. presence on the peninsula, including military exercises, sanction relief, and engagement. I’ve seen talk of a timeline of 2020, which may be a bit unrealistic. During this process of negotiations, a freeze on nuclear and missile tests needs to be in effect. I think sanctions have been working, and I give credit to China. I think they have been serious this time.

I think Kim has an endgame. I don’t know what it is. He is a rational actor who has been underestimated. I think, in the end, the North Koreans want something of acceptability in the international community, and they’ve always wanted direct negotiations with the United States. They got that. That’s why it’s so important for this summit to succeed.

Bill Richardson, a former UN ambassador and Democratic governor of New Mexico, has been an envoy to North Korea on multiple occasions. This is adapted from remarks April 19 at the annual meeting of the Arms Control Association in Washington.