“[My time at ACA] prepared me very well for the position that I took following that with the State Department, where I then implemented and helped to implement many of the policies that we tried to promote.”
– Peter Crail
Business Executive for National Security
June 2, 2022
DOCUMENT: Panmunjeom Declaration for Peace, Prosperity and Unification of the Korean Peninsula

The following is the an English translation from the South Korean government of the full text of a joint declaration signed and issued by South Korean President Moon Jae-in and North Korean leader Kim Jong Un at the end of their April 27 summit at the Joint Security Area of Panmunjom.

During this momentous period of historical transformation on the Korean Peninsula, reflecting the enduring aspiration of the Korean people for peace, prosperity and unification, President Moon Jae-in of the Republic of Korea and Chairman Kim Jong Un of the State Affairs Commission of the Democratic People’s Republic of Korea held an Inter-Korean Summit Meeting at the “Peace House” at Panmunjeom on April 27, 2018.

The two leaders solemnly declared before the 80 million Korean people and the whole world that there will be no more war on the Korean Peninsula and thus a new era of peace has begun. 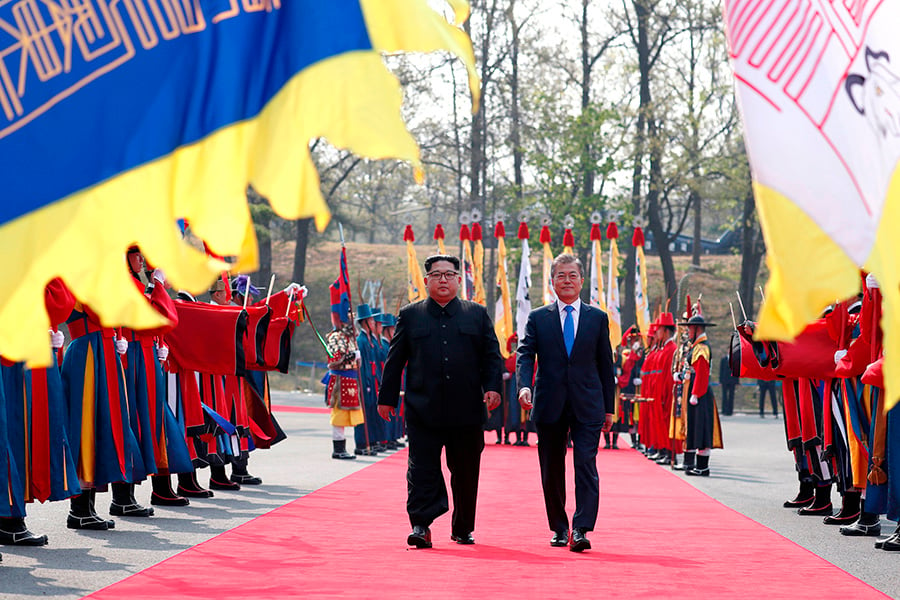 The two leaders, sharing the firm commitment to bring a swift end to the Cold War relic of longstanding division and confrontation, to boldly approach a new era of national reconciliation, peace and prosperity, and to improve and cultivate inter-Korean relations in a more active manner, declared at this historic site of Panmunjeom as follows :

1. South and North Korea will reconnect the blood relations of the people and bring forward the future of co-prosperity and unification led by Koreans by facilitating comprehensive and groundbreaking advancement in inter-Korean relations. Improving and cultivating inter-Korean relations is the prevalent desire of the whole nation and the urgent calling of the times that cannot be held back any further.

2. South and North Korea will make joint efforts to alleviate the acute military tension and practically eliminate the danger of war on the Korean Peninsula. Alleviating the military tension and eliminating the danger of war is a highly significant challenge directly linked to the fate of the Korean people and also a vital task in guaranteeing their peaceful and stable lives.

The two leaders agreed, through regular meetings and direct telephone conversations, to hold frequent and candid discussions on issues vital to the nation, to strengthen mutual trust and to jointly endeavor to strengthen the positive momentum towards continuous advancement of inter-Korean relations as well as peace, prosperity and unification of the Korean Peninsula.

In this context, President Moon Jae-in agreed to visit Pyongyang this fall.