President Donald Trump directed his administration to work with Congress to address “serious flaws” in the multilateral nuclear deal with Iran, but with Tehran and Washington’s negotiating partners rejecting renegotiations, his approach is unlikely to yield results and risks resulting in the United States violating the agreement.

Outlining his Iran policy in an Oct. 13 speech, Trump said he would terminate the accord if Congress and the U.S. negotiating partners in the P5+1 group—China, France, Germany, Russia, and the United Kingdom—fail to address areas of concern, such as the expiration of certain nuclear constraints and Iran’s ballistic missile development. 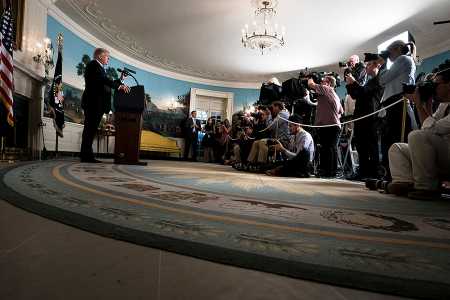 Trump also said he was withholding a quarterly certification to Congress tied to the nuclear deal on the grounds that sanctions relief provided to Iran was not proportionate to the restrictions on Tehran’s nuclear program. That was an expected step after Trump said in July that he was unlikely to issue the certification. (See ACT, September 2017.)

Withholding certification does not violate the nuclear deal, known as the Joint Comprehensive Plan of Action (JCPOA). Trump said that the United States intends to remain party to the agreement for now, while he looks to Congress and U.S. allies to "address the deal's many serious flaws."

Despite Trump’s threats to terminate the accord if changes are not made, Washington’s negotiating partners and Iran rejected renegotiating elements of the deal. Shortly after Trump’s Oct. 13 announcement, Federica Mogherini, EU foreign policy chief and head of the P5+1, said that the deal is working, the EU will continue to implement it, and it is “not up to a single country to terminate it.”

Iranian President Hassan Rouhani, who is under pressure from regime hardliners, said Iran “will not be the first to withdraw from the deal but, if its rights and interests in the deal are not respected, it will stop implementing all its commitments and will resume its peaceful nuclear program without any restrictions.”

Washington’s actions prove that the United States is “not a reliable negotiating partner,” he said, a statement that could have ramifications for any future talks with Iran, as well as for U.S. efforts to negotiate with North Korea over its nuclear weapons program.

UK Prime Minister Theresa May, French President Emmanuel Macron, and German Chancellor Angela Merkel issued a joint statement Oct. 13 expressing “concern about the possible implications” of Trump’s decision to withhold certification and encouraging him and Congress to consider “the implications to the security of the U.S. and its allies before taking any steps that might undermine the JCPOA, such as re-imposing sanctions on Iran lifted under the agreement.”

Withholding certification allows Congress to introduce legislation within 60 days to reimpose sanctions waived under the deal using an expedited legislative process, but it appears unlikely that Congress will pursue this route, which would clearly violate the agreement.

The current approach espoused by several Senate Republicans would seek to address Trump’s concerns about ballistic missiles and limits that expire under the deal and refrain from reimposing sanctions. Still, if enacted as described, this approach would violate the terms of the accord by seeking to pressure Iran, under threat of sanctions, to abide by limits for a longer duration than required under the deal.

Sen. Bob Corker (R-Tenn.) released a factsheet Oct. 13 summarizing his legislative approach, titled “Fixing the Iran Deal,” which outlines that U.S. sanctions waived under the deal will be reimposed automatically if Iran takes certain steps, including activities that are permitted under the nuclear deal or will be permitted in the out years of the agreement.

For instance, the factsheet says that U.S. sanctions waived under the deal will snap back automatically if Iran’s nuclear weapons “breakout” time, commonly defined as the time it would take Iran to amass enough weapons-grade fissile material for one bomb, drops to less than one year.

For the first 10 years of the nuclear deal, the combination of limits on Iran’s uranium-enrichment capacity and stockpile of enriched uranium holds Iran to a 12-month breakout time. By year 15, however, certain limits expire; and Iran could choose to expand its uranium-enrichment capacity, at which point breakout would likely drop below 12 months.

Despite the deal permitting Iran to expand uranium enrichment, U.S. sanctions would be automatically reimposed at that point, which many experts contend violates the agreement. Corker’s factsheet, however, argues that approach is “ridding the JCPOA of sunset provisions as they apply to U.S. sanctions.”

Trump did not specifically mention Corker’s initiative in his speech, but said he supported congressional efforts to “make all restrictions on Iran’s nuclear activity permanent under U.S. law” and “prevent Iran from developing” an intercontinental ballistic missile.

It seems unlikely that Democrats would support any approach that violates the deal. In the Senate, any such effort to bring legislation altering the terms of the nuclear deal up for a vote would require 60 votes; and key Senate Democrats, including several who opposed the deal in 2015, signaled they do not support abrogating the deal.

Sen. Ben Cardin (D-Md.), ranking member on the Senate Foreign Relations Committee, opposed the deal in 2015, but denounced Trump’s decision to withholding certification as “reckless” and “without factual or material evidence” to warrant such a move.

Cardin said that “we will not buy into the false premise that it is Congress’ role to legislate solutions to problems of [Trump’s] own making” and that it is “up to Congress to show the world that there is bipartisan support for the United States to uphold its commitments, including the JCPOA.”

An official from a European country that participated in the negotiations told Arms Control Today on Oct. 23 that the “deal is done” and that “any efforts to unilaterally change its terms” jeopardizes the agreement.

He said Mogherini was very clear at the United Nations in September that there is “no interest in or need to renegotiate or reopen the accord.” Concerns outside of the deal, such as ballistic missiles, can be addressed separately from implementation of the agreement, he added.

May, Macron, and Merkel made a similar statement in their Oct. 13 letter, saying that they “stand ready to take further appropriate measures to address” issues such as ballistic missile development “at the same time as we work to preserve the JCPOA.”

Corker’s factsheet does not explicitly mention ballistic missiles, but in interviews following Trump’s speech, he has said his approach may reimpose sanctions automatically in response to certain ballistic missile activities conducted by Iran.

The United States, as permitted by the accord, continues to sanction individuals and entities involved with Iran’s ballistic missile activities.—KELSEY DAVENPORT