Russia finished destroying its chemical weapons arsenal, once the largest in the world at nearly 40,000 metric tons, and criticized the United States for its delays in doing likewise. 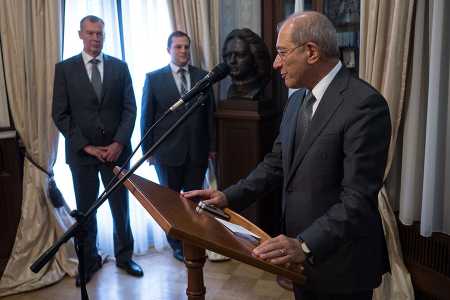 Russia was mandated under the 1993 Chemical Weapons Convention (CWC) to destroy its chemical weapons by 2007, although it received several extensions, most recently to 2020. Similarly, the United States originally had a 2007 deadline, which was pushed to 2012 and then 2023. (See ACT, July/August 2009.)

The CWC, which entered into force in 1997, has 192 states-parties. It is implemented by the Organisation for the Prohibition of Chemical Weapons (OPCW), which to date has verified the destruction of 96.3 percent of declared chemical weapons stockpiles of states-parties worldwide.

Russia’s chemical weapons destruction, completed Sept. 27, was “a momentous occasion” and a “historic milestone,” said OPCW Deputy Director-General Hamid Ali Rao at a commemorative ceremony. Russia declared an arsenal of 39,967 metric tons of chemical agents, including lewisite, mustard, phosgene, sarin, soman, and VX when it signed the CWC in 1993. It established its first on-site destruction facility in 2002, eliminating about 30 percent of its arsenal by 2009 and 85 percent by 2015.

Russia eliminated its arsenal by neutralizing the chemicals. Paul Walker, director of Green Cross International’s Environmental Security and Sustainability program, described the technique in an Oct. 19 email to Arms Control Today as “a wet-chemistry process of draining all weapons and storage tanks of chemical agents, and then mixing the agents with hot water and caustic reagents such as sodium hydroxide to destroy the deadly toxic nature of the agents.”

Russia operated a total of five chemical weapons destruction facilities. All but the facility in the town of Kizner, about 620 miles east of Moscow, had finished destruction and been closed by 2015.

Although Russia spent more than $5 billion to destroy its chemical weapons, according to Russian state media, it also benefited from significant international assistance. Russian Foreign Minister Sergey Lavrov, in remarks Sept. 27, credited more than 15 countries with cooperation. Vladimir Yermakov, deputy head of the foreign ministry’s Department for Weapons Control and Non-Proliferation, thanked the United States, the United Kingdom, Italy, Poland, and France specifically for their financial help. Some of the U.S. funding and technical assistance was provided though the 1991 Cooperative Threat Reduction program, also known as the Nunn-Lugar program.

With the elimination of Russia’s chemical weapons, the burden falls on the two remaining CWC member states who have yet to complete destruction of their declared arsenals: Iraq and the United States.

The size and quality of Iraq’s chemical weapons arsenal is unknown, and ongoing conflict in the Middle East presents challenges for safe removal and neutralization. Planning is reportedly underway to begin elimination.

The United States has been destroying its declared arsenal of 28,000 metric tons of chemical agents, second in size to Russia’s, since the 1990s. It has destroyed about 90 percent and is scheduled to complete destruction by 2023. The United States, which has completed destruction of five of its stockpiles, currently operates a chemical weapons destruction facility in Colorado and plans to open one in Kentucky in a few years.

The United States has destroyed its chemical weapons at rate nearly one-third of Russia’s due in part to differences between the two countries’ stockpiles, according to Walker. Russian chemical agents were stored in large tanks without explosives or propellants, but U.S. chemical weapons stockpiles include more explosive components, requiring technically difficult and time-consuming destruction.

Since completing its chemical weapons destruction, Russia has criticized the United States for lagging. Russian President Vladimir Putin, speaking at the Valdai International Discussion Club on Oct. 19, noted the U.S. delay to 2023, which “does not look proper for a nation that claims to be a champion of nonproliferation and control.”

The United States considers that it is operating in compliance with CWC requirements. “We remain on track to meet our planned completion date,” Kenneth Ward, U.S. permanent representative to the OPCW, said in an Oct. 10 statement to the OPCW Executive Council.

With Russia’s chemical weapons elimination and the revised U.S. destruction deadline six years away, experts say that the CWC will soon be moving into a “post-chemical-weapons-destruction” phase.

John Hart, head of the Chemical and Biological Security Project at the Stockholm International Peace Research Institute, outlined possible futures for the OPCW in a Sept. 29 blog post. “At least two visions may be realized: the first in which the OPCW is focused on chemical-weapon threats with most resources allocated accordingly, the second in which the OPCW serves as a model of international outreach and capacity building for the peaceful uses of chemistry.”

“Now the goal of a chemical-weapons-free-world is much nearer,” declared Sergio Duarte, president of the Pugwash Conferences on Science and World Affairs and a former UN high representative for disarmament affairs, in a Sept. 27 statement. He laid out several steps for the CWC regime to pursue. “It is necessary…to ensure the 100 percent universality of the Chemical Weapons Convention and to further improve safeguards against any re-emergence of chemical weapons on the basis of traditional and new technologies and against any attempts by any actors to get hold of or to use these prohibited weapons.”—ALICIA SANDERS-ZAKRE