Russian President Vladimir Putin blasted the United States for failing to meet nonproliferation commitments and warned that Russia would have an “immediate and reciprocal” response if the United States withdraws from the 1987 Intermediate-Range Nuclear Forces (INF) Treaty. 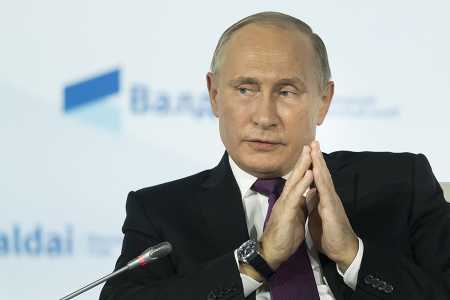 In the speech Oct. 19, Putin praised U.S.-Russian nuclear cooperation in the 1990s and early 2000s, but blamed the United States for derailing that progress. Addressing the annual meeting of the Valdai Discussion Club in Sochi, Putin cited the U.S. delay to 2023 in eliminating its chemical weapons stockpile, while noting that Russia completed its elimination Sept. 27. Further, he noted a shift and delays in the U.S. method for surplus plutonium disposal, which Moscow claims violates the 2000 Plutonium Management and Disposition Agreement (PMDA) between the two countries.

Putin questioned whether such delays are “proper” for “a nation that claims to be a champion of nonproliferation and control.” He cited additional grievances, including U.S. withdrawal from the Anti-Ballistic Missile Treaty in 2002, failure to ratify the 1996 Comprehensive Test Ban Treaty, and halting of implementation of a 123 agreement on peaceful nuclear cooperation. President George W. Bush froze that agreement in September 2008, just four months after it was signed, in response to Russia’s war with neighboring Georgia. It was revived in 2010 as part of President Barack Obama’s diplomatic “reset” with Russia.

In his remarks, Putin portrayed the United States as the unreliable partner in nonproliferation efforts. He cited Washington’s decision to push back the deadline for destroying the U.S. chemical weapons arsenal from 2007 to 2023, an effort that has been hindered by rising costs and stringent environmental restrictions. Under U.S. Nunn-Lugar Cooperative Threat Reduction programs, the United States provided financial and technical support to help Russia in destroying its chemical weapons arsenal, which was completed 10 years after the original 2007 deadline set for both countries.

Putin also took aim at the troubled U.S. effort to eliminate surplus plutonium, which he called “perplexing and alarming.” He criticized the United States for canceling plans, made in agreement with Russia, to eliminate its weapons-grade plutonium by turning it into mixed-oxide fuel for nuclear power reactors.

Putin condemned the unilateral U.S. decision, saying that Moscow only learned about it after seeing a “budget submission to the Congress” seeking funding for an alternative disposal method. (See ACT, March 2016.) Alteration of the terms of the PMDA requires agreement by both parties, which the United States did not obtain when it decided to pursue the cheaper “dilute-and-dispose” method. Moscow suspended its participation in the PMDA in October 2016. (See ACT, Nov. 2016.)

Further, Putin noted apparent U.S. ambivalence toward extending the 2010 New Strategic Arms Reduction Treaty (New START), as permitted under the terms of the accord. “Now we hear that New START does not work either,” he said, seeming to reference a January phone call with President Donald Trump in which Trump called New START a “bad deal.” The Russians have declared a readiness to negotiate an extension of the treaty, but the U.S. position remains unclear.

Putin stated that Russia would not withdraw from the treaty, which runs through February 2021.

Putin dismissed U.S. allegations of Russian noncompliance with the INF Treaty. He said that Russia might be “tempted” to violate the treaty if it did not possess air- and sea-based missiles, such as Kalibr cruise missiles, that match U.S. capabilities. The INF Treaty, which eliminated U.S. and Russian land-based cruise missiles with a range of 500 to 5,500 kilometers, left both countries free to deploy air- and sea-launched missiles with that range.

He warned that Moscow would offer an “immediate and reciprocal” response to a U.S. withdrawal from the INF Treaty, a step advocated by some Republican lawmakers such as Sen. Tom Cotton (R-Ark.). Putin did not specifically address U.S. accusations that Russia has deployed a ground-launched cruise missile with a treaty-prohibited range. (See ACT, Oct. 2017.)

Russian Foreign Minister Sergey Lavrov, speaking at an Oct. 20 nonproliferation conference in Moscow, criticized the United States for “refusing to specify” its allegations of Russia’s INF Treaty violations. The United States provided some specifics to Russia at a meeting of the treaty’s Special Verification Commission in November 2016, according to U.S. officials.

Lavrov expressed certainty that the “bilateral dialogue between Russia and the United States on strategic stability will continue,” but doubts that the bilateral format would be sufficient for negotiating future nuclear weapons reductions. (See ACT, Oct. 2016.) Russia has stepped up calls in recent years for multilateral arms reductions.

Lavrov emphasized the need to “prevent a spiral of confrontation” between Washington and Moscow over arms control from becoming “unstoppable.”—MAGGIE TENNIS