The nuclear danger posed by North Korea is not new. But since the arrival of Donald Trump in the White House, a bad situation has become far worse. Now, as Trump readies for a trip to East Asia, the crisis enters a critical phase. 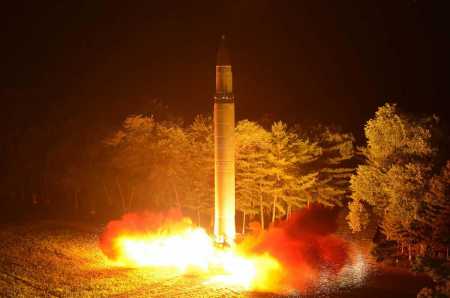 The risk of conflict through miscalculation by either side now may be as severe as during the tense days of October 1962, when the United States and the Soviet Union nearly went to war over the deployment of Soviet missiles in Cuba.

Now, as then, miscalculation could lead to war and escalation to the nuclear level. Millions of lives in South and North Korea and Japan are at risk. Each side must refrain from further threats and taunts and open a direct, private, and high-level diplomatic channel of communication.

Earlier this year, the Trump administration said its North Korea policy would involve “maximum pressure and engagement.” Since then, we have seen pressure, reckless rhetoric, and threats, not engagement.

On Sept. 3, North Korea conducted its sixth and largest nuclear test—a thermonuclear blast having a yield of 150 to 250 kilotons. In response, China and Russia voted for new sanctions at the UN Security Council. China’s central bank has also instructed other Chinese banks to stop providing financial services to North Korea.

In his inaugural address to the United Nations on Sept. 19, Trump worsened the situation. “We will have no choice but to totally destroy North Korea” if it threatens U.S. allies in the region, he said. Trump has ordered regular B1-B strategic bomber flights near North Korea, which Pyongyang sees as a prelude to war. He called North Korea’s authoritarian leader, Kim Jong Un, a “rocket man” on “a suicide mission.”

In his clumsy style, Trump appears to be trying to intimidate Kim. But the history of the nuclear age has shown that  smaller states, even those without nuclear weapons, are not easily intimidated by U.S. nuclear threats. North Korea is  no exception.

To show Pyongyang’s determination, Foreign Minister Ri Yong Ho warned that North Korea might conduct a hydrogen bomb test explosion over the Pacific. Ri claims that the United States has effectively declared war on his country and therefore North Korea reserves the right to shoot down any U.S. aircraft that fly over or near its territory.

In October 1962, President John F. Kennedy worked very hard to carefully coordinate all U.S. government messages and signals toward Moscow so U.S. intentions were clear. He exchanged direct, private messages with his Soviet counterpart, Nikita Khrushchev, to seek a way out of the crisis. Kennedy was careful not to rule out certain compromises that would later prove to be essential to resolving the crisis.

But Trump is no Kennedy. The lack of discipline and coordination shown by the Trump administration greatly increases the risk factor. “I think there’s a 10 percent chance the wheels really come off, and we have a full-on war on the Korean peninsula, which would include nuclear use,” warned former NATO Supreme Allied Commander James Stavridis on Sept. 28.

Nikki Haley, U.S. ambassador to the UN, and other U.S. officials have unwisely knocked down Chinese proposals to de-escalate tensions that would involve North Korea halting further nuclear and missile tests in exchange for the United States pausing certain military exercises that North Korea sees as particularly threatening.

If each side can refrain from further threats, it may still be possible for a direct U.S.-North Korean dialogue, without preconditions, that sets a new course toward a negotiated or brokered agreement that addresses the concerns of the international community and the security concerns of North Korea.

A commonsense first step would be an immediate halt to further North Korean nuclear and intermediate- or long-range ballistic missile tests and U.S. military exercises and maneuvers that could be interpreted to be practice runs for an attack.

Given that neither Kim nor Trump has ever been known to publicly back down, however, an outside diplomatic intervention may be in order. The UN secretary-general could convene an emergency, closed-door meeting with senior leaders from the members of the past six-party talks (China, Japan, North Korea, Russia, South Korea, and the United States) and initiate a serious dialogue designed to lower tensions and address issues of mutual concern. A trusted emissary from a third party, such as the Vatican, could pursue shuttle diplomacy. Alternatively, Trump could authorize a personal representative to meet with a senior representative of Kim to work out a plan to reduce tensions.

As Kennedy said 55 years ago following the Cuban missile crisis, “Above all, while defending our own vital interests, nuclear powers must avert those confrontations which bring an adversary to the choice of either a humiliating defeat or a nuclear war.”