Humanization of Arms Control:
Paving the Way for a World Free of Nuclear Weapons
By Daniel Rietiker, Routledge, 2018, 322 pp. 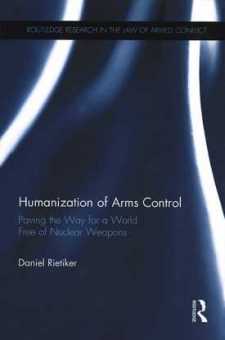 Daniel Rietiker provides a thorough and timely review of humanitarian arms control agreements, with an eye toward the benefit of applying humanitarian values to the field of nuclear arms control as exemplified by the recent Treaty on the Prohibition of Nuclear Weapons.

Rietiker first examines non-nuclear humanitarian arms control agreements: the Chemical Weapons Convention, Ottawa Convention, Oslo Convention, and Arms Trade Treaty. He then turns to existing nuclear treaties, such as the nuclear Nonproliferation Treaty and the Comprehensive Test Ban Treaty, evaluating the role of civil society in their negotiation and implementation. He also reviews the issues of legality of nuclear weapons under human rights law.

In his account, Iranian militants and pragmatists, envisioning nuclear weapons as a deterrent, prevailed over then-Supreme Leader Ayatollah Ruhollah Khomeini, who “took the idealistic position that the Quran was not compatible” with weapons of mass destruction. Iran was able to create an illicit supplier network and to “skillfully manipulate” the watchdog International Atomic Energy Agency, he writes. He credits falling oil prices, economic pain from international sanctions, and domestic pressure from “normalizers” such as President Hassan Rouhani with leading to the negotiated rollback known as the Joint Comprehensive Plan of Action.—TERRY ATLAS