The formal adoption of the first legally binding global treaty prohibiting nuclear weapons possession, use, and threat of use was greeted with widespread approval from the international community, with the exception of the nuclear-weapon states and their defense treaty allies who dismissed the accord as irrelevant and even potentially dangerous. 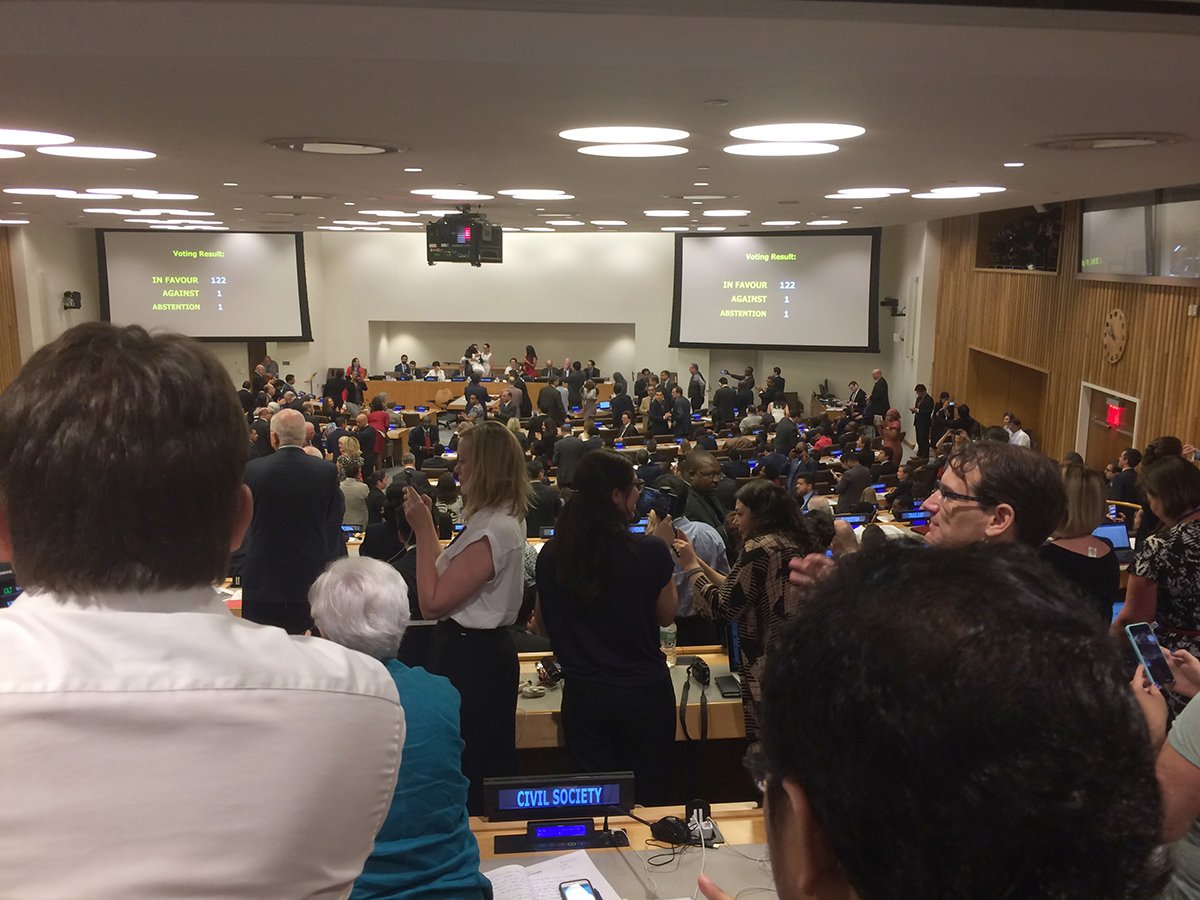 On July 7, 122 non-nuclear-armed states voted to adopt the Treaty on the Prohibition of Nuclear Weapons following four weeks of talks at a special UN conference. Supporters hailed it as a new tool to strengthen norms against nuclear weapons use and said it can, in tandem with the nuclear Nonproliferation Treaty (NPT), discourage other states from seeking to obtain nuclear weapons and spur further action on nuclear disarmament.

“After many decades, we have managed to sow the first seeds of a world free of nuclear weapons,” declared Costa Rican Ambassador Elayne Whyte Gómez, president of the conference.

The Netherlands, the only NATO ally participating, voted against the treaty, and Singapore abstained. No nuclear-armed state participated, and the United States actively opposed the effort. The treaty has provisions governing how nuclear-weapon states could join the treaty, verifiably giving up their arsenals, although treaty supporters recognized that is not likely to happen anytime soon.

Even so, the treaty, which opens for signature when the UN General Assembly convenes in September, represents a powerful international statement at a time of renewed anxieties over potential nuclear weapons use. Dell Higgie, New Zealand’s ambassador for disarmament,  applauded the “strong and balanced treaty” in a July 8 email to Arms Control Today, commenting that the negotiations “put nuclear disarmament and the humanitarian spirit in the spotlight again.”

The negotiations were authorized in December 2016 by the UN General Assembly, which called for a “legally binding instrument to prohibit nuclear weapons, leading towards their total elimination.” Such talks had been sought by states and disarmament advocates long frustrated by what they regard as the nuclear-weapon states’ lack of progress on their existing NPT disarmament obligations, by the growing risk of intentional or accidental nuclear weapons use, and by the recognition of the catastrophic humanitarian consequences of a nuclear detonation. (See ACT, June 2017.)

“We hope that today marks the beginning of the end of the nuclear age,” Beatrice Fihn, executive director of the International Campaign to Abolish Nuclear Weapons, said in a July 7 statement.

The effort and outcome united individuals such as Setsuko Thurlow, a survivor of the U.S. bombing of Hiroshima, and former U.S. Defense Secretary William Perry, who oversaw the U.S. nuclear force under President Bill Clinton.

Thurlow, who has spent her lifetime advocating nuclear abolition, brought many participants to tears as she called on them to “pause for a moment to feel the witness of those who perished in Hiroshima and Nagasaki.” Perry, who now warns of a nuclear abyss, applauded the treaty as “an important step towards delegitimizing nuclear war as an acceptable risk.”

“Though the treaty will not have the power to eliminate existing nuclear weapons, it provides a vision of a safer world,” Perry said in a July 7 statement.

A note of discord emerged as the negotiations concluded. The Netherlands called for a vote, instead of allowing adoption by consensus. The Dutch delegates explained that the treaty was incompatible with its obligations as a NATO member, had provisions that are not verifiable, and could undermine the NPT. Singapore abstained after provisions it sought were not adopted.

Outside the negotiation room, opposition was more stark. In a joint statement on July 7, the United States, the United Kingdom, and France strongly rejected the “purported ban” that they said will not result in “the elimination of a single nuclear weapon” since it fails to address the security concerns “that continue to make nuclear deterrence necessary.”

“We are disappointed at the ban negotiations, for the proposed treaty will be ineffective at best and may in fact be deeply counterproductive,” Chris Ford, special assistant to the president and senior director for weapons of mass destruction and counterproliferation on the U.S. National Security Council, said in a July 10 email to Arms Control Today. “We hope, however, that the more thoughtful of its supporters will join us in seeking genuinely effective measures related to ending nuclear arms races and fulfilling the objectives of the NPT.”

Ford said the Trump administration is engaged in “efforts to reduce nuclear dangers worldwide,” including through initiatives to strengthen the NPT; secure or eliminate nuclear materials “that might otherwise fall into the hands of terrorists and other rogue actors;” improve nuclear safety; counter threats to nuclear facilities; improve crisis communications between nuclear powers to reduce the risk of nuclear accident or miscalculation; and promote and maintain strategic stability through diplomatic engagement and “effective arms control.”

This agenda “includes a commitment, consistent with the NPT, to seeking to ease tension and strengthen trust between states in ways that will help reduce nuclear dangers and offer the best hope of fulfilling the NPT’s objectives,” he said.

The treaty has a 24-paragraph preamble acknowledging the catastrophic humanitarian consequences of nuclear weapons use and the value of existing international disarmament agreements, including the NPT, the Comprehensive Test Ban Treaty, and nuclear-weapon-free-zone agreements, as well as the right of states-parties to peaceful nuclear energy applications.

States-parties are prohibited to use, threaten to use, develop, produce, manufacture, acquire, possess, stockpile, transfer, station, or install nuclear weapons or assist with any prohibited activities. Non-nuclear-weapon states are required to have, at a minimum, a comprehensive safeguards agreement with the International Atomic Energy Agency (IAEA).

The treaty requires any current or former nuclear weapons state that seeks to join the treaty to conclude a safeguards agreement with the IAEA to verify that nuclear materials are not diverted from peaceful to weapons purposes. The treaty also obligates states-parties to provide victim assistance and environmental remediation to those affected by nuclear weapons use and testing.

Biennial meetings of states-parties will address implementation and other measures. Review conferences will be held every six years. The treaty enters into force 90 days after the 50th state ratifies it.

The treaty underwent significant revisions during two sessions of often constructive but at times contentious negotiations. Language on declarations, safeguards, and treaty accession by nuclear-weapon states was the most heavily revised, largely for precision and clarity.

The biggest debates centered on whether to include controversial language on prohibitions and strengthening safeguards re­quirements. Whyte Gómez chose not to incorporate contested proposals into the final text in order to conclude a treaty with broad support. The failed measures include a proposal supported by Cuba and Iran for additional prohibitions on financing and transit of nuclear weapons, which Brazil and Mexico opposed. Sweden and Switzerland pushed for stronger safeguards requirements, specifically a reference to the IAEA Model Additional Protocol, but Brazil opposed making mandatory a previously voluntary agreement.

There was a last-minute debate on July 5 about removing the clause that permits withdrawal from the treaty, which Whyte Gómez ultimately decided to retain.

Supporting states hailed the achievement, even as many dele­gates acknowledged the treaty is only a step toward nuclear disarmament. The treaty “lays the foundation,” but adoption is “just the beginning,” Ambassador Thomas Hajnoczi, Austria’s permanent representative to the United Nations Office at Geneva, said in a statement after the vote.

The negotiators agreed to set 50 ratifying states as the threshold for the treaty’s entry into force, but they recognized the accord will have greater normative weight with the more states that join. Although most of the 122 states that voted to approve the treaty will likely sign this year, the ratification process will be more time consuming, especially if the major nuclear-armed states seek to dissuade key states from ratifying.

Under the terms of the accord, states-parties are obligated to press other states to “accept, approve or accede to” the treaty with a “goal of universal adherence.” Brazil was among those to hint at the challenge of reaching that goal, urging “a continued dialogue with those that did not join this treaty, including those with nuclear weapons.”—ALICIA SANDERS-ZAKRE