In a high-stakes test, the problem-plagued defense system designed to protect the United States from a limited long-range missile attack was able to intercept and destroy a mock intercontinental ballistic missile (ICBM)-range target for the first time.

The successful May 30 test of the Ground-Based Midcourse Defense (GMD) system occurred against the backdrop of the growing North Korean ballistic missile threat and calls from some members of Congress to increase U.S. missile defenses in terms of numbers and spending. 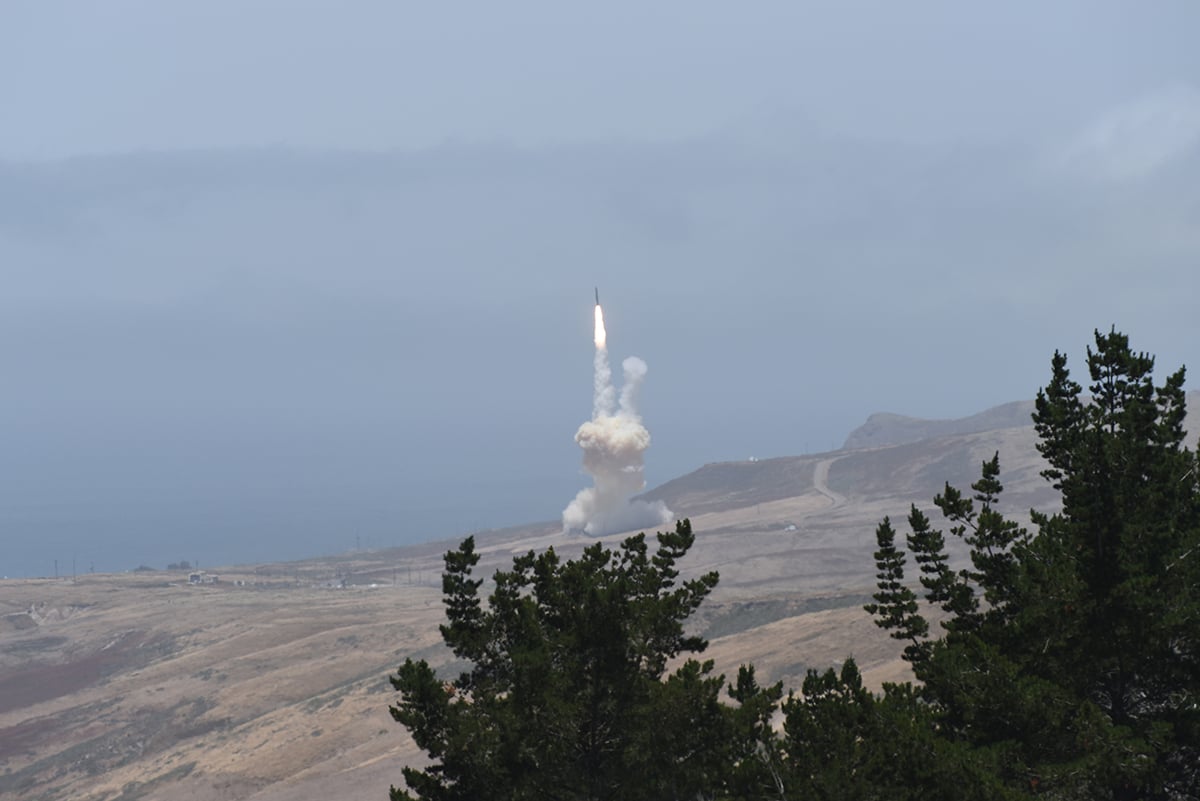 The interception was “an incredible accomplishment” and a “critical milestone,” Vice Adm. James Syring, director of the Missile Defense Agency (MDA), said in a statement. “The system demonstrates that we have a capable, credible deterrent against a very real threat.”

Still, some observers said the test does not resolve doubts about whether the GMD system can be relied on anytime soon to protect the continental United States against a limited attack, such as one launched from North Korea or Iran. “The mock enemy target was only barely of ICBM range, and slower than an ICBM from North Korea to Los Angeles would be,” Philip Coyle, former director of weapons testing for the Defense Department and a member of the Arms Control Association Board of Directors, said in a May 30 statement. In the $244 million test, known as FTG-15, a missile interceptor launched from Vandenberg Air Force Base in California collided with a target, launched from the Army’s Kwajalein Test Site in the Marshall Islands, flying at a range and speed similar to that of an ICBM. Multiple sensors provided the target acquisition and tracking data necessary to execute the interception.

In addition to being the first test against an ICBM-class target, FTG-15 was also the first test of an upgraded kill vehicle, known as the CE-II Block I EKV. The kill vehicle sits atop the interceptor’s booster rocket and is intended to collide with a target in outer space.

A total of 36 GMD interceptors are currently deployed in Alaska and California, and an additional eight interceptors armed with the CE-II Block I EKV will be installed by the end of the year.

Before FTG-15, the GMD system had not been tested against a mock target since June 2014. (See ACT, July/August 2014.) The MDA has now conducted 18 intercept tests of the system, of which 10 have been reported as successful.

In a May 31 press call, Syring described the test as “very realistic” and said it “actually replicated” an operational scenario that the Pentagon would face if North Korea fired an ICBM at the United States. The test included decoys that North Korea might use to fool the GMD system, he said.

North Korea in July successfully tested for the first time an ICBM that could reach as far as Alaska.

Following the test, the Pentagon’s testing office updated its assessment, which had described the GMD system as having only “a limited capability” to defend the U.S. homeland from a small number of simple long-range missiles launched from North Korea or Iran. In a June 6 memo, the office said that the system has “demonstrated capability” to defend against a small number of long-range missile threats that employ “simple countermeasures.”

Syring told a Senate panel in 2013 that the MDA tests the GMD system “in a controlled, scripted environment based on the amount of time and money each one of these tests costs.” This means the there are limits to the realism of the test scenario.

The GMD system has not been tested against complex decoys and countermeasures that North Korea could develop. The system also has not been tested against more than one target at the same time. In addition, 20 of the 32 interceptors currently deployed in Alaska are armed with an older kill vehicle that failed to intercept the target in its last test in 2013 and has not had a successful interception since 2008.

The next test of the GMD system is scheduled for late 2018 and, for the first time, will involve firing two interceptors against one ICBM target. In a real-world scenario, multiple interceptors would be fired at an incoming missile.

Syring said that the interceptor tested in FTG-15 will allow the United States to “outpace” the North Korean ballistic missile threat “through 2020.”

A new, redesigned kill vehicle under development “will be the next step to not only improving reliability, but [also to] improving performance against the evolving threat,” he said. The MDA announced in March 2014 that it would build a kill vehicle that would be more reliable and cost effective. (See ACT, July/August 2014.) The first test is slated for 2019 with deployment scheduled to begin in 2022.

The administration’s budget request would provide $465 million for the new kill vehicle, $246 million more than the fiscal year 2017 appropriation. Over the next five years, the MDA is seeking $2.8 billion for this effort, a major increase from the $600 million the agency was projecting to request from fiscal years 2017 through 2021.

In a May 30 report, the Government Accountability Office (GAO) raised several red flags. For example, both U.S. Northern Command and U.S. Strategic Command are questioning whether the seeker planned for the kill vehicle will be able “to detect and track threats in an ICBM-range environment,” according to the GAO.

The MDA is pursuing additional efforts to improve the GMD system’s capabilities, including development of a new ground-based sensor to provide enhanced tracking and discrimination capabilities and a new “multi-object” kill vehicle to allow a single GMD interceptor to destroy multiple targets. The MDA aims to begin fielding the multiple kill vehicle in 2025, five years earlier than its previous plans.

The Trump administration is conducting a congressionally mandated review of missile defense policy that could signifi­cantly alter policy and have far-reaching implications for the U.S. military budget and strategic relationship with Russia and China. (See ACT, May 2017.)

The Trump administration’s fiscal year 2018 budget request for the MDA largely continues programs and plans underway during the previous administration. Projected funding for fiscal years 2019 through 2022 “are notional” and will be determined by the outcome of the ongoing policy review, MDA spokesman Chris Johnson said in June.

Meanwhile, some U.S. lawmakers are calling on Congress to expand the GMD system and accelerate new technology development programs.

Sen. Dan Sullivan (R-Alaska) introduced legislation May 22 that would authorize procurement of an additional 28 GMD interceptors for Alaska, beyond the 44 currently planned, and require the Pentagon to study having up to 100 interceptors distributed across the United States. The measure has seven co-sponsors, including three Democrats.