“Your association has taken a significant role in fostering public awareness of nuclear disarmament and has led to its advancement.”
– Kazi Matsui
Mayor of Hiroshima
June 2, 2022
Old Disputes Cloud NPT Review

As a review cycle began for the nuclear Nonproliferation Treaty (NPT), old divisions quickly re-emerged that will challenge efforts to reach a successful outcome at the 2020 review conference of states-parties to the NPT.

Diplomats at the initial UN meeting to prepare for the review conference voiced support for a number of disarmament and nonproliferation initiatives, but stumbled on familiar obstacles, namely the pace of disarmament and how to advance the initiative for a zone free of weapons of mass destruction (WMD) in the Middle East. 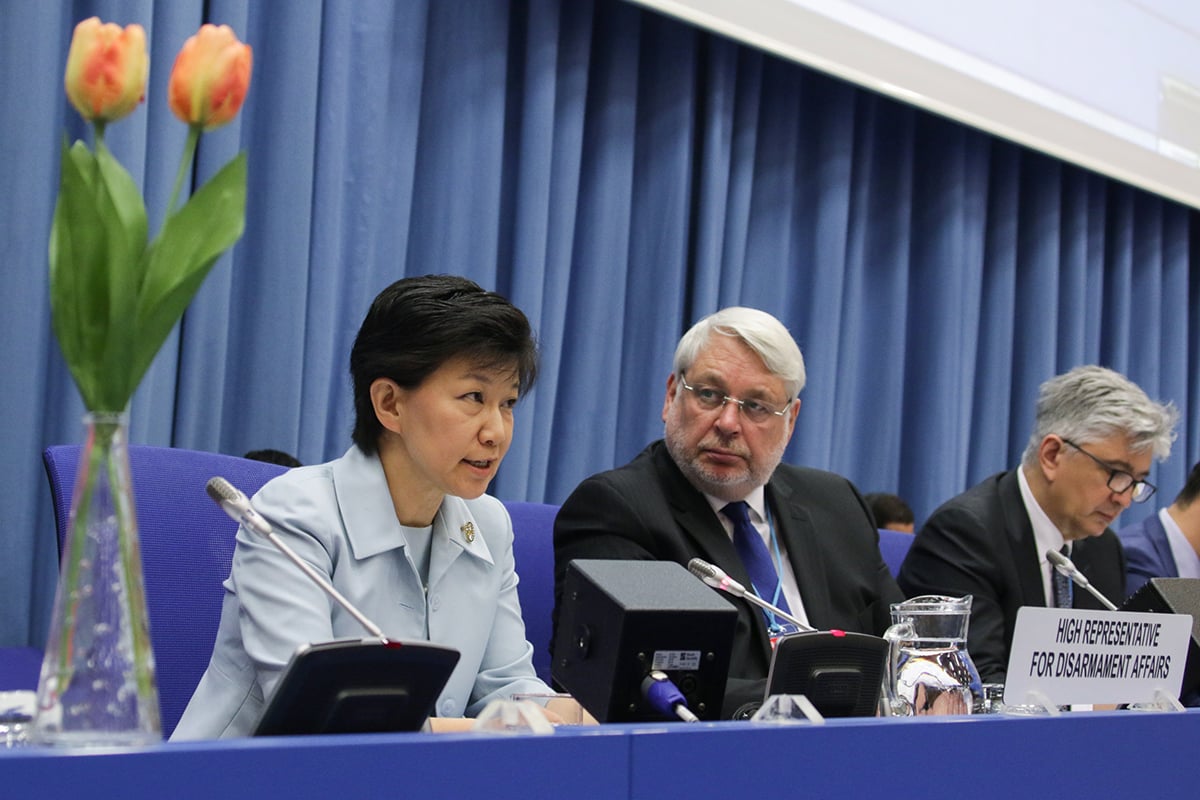 The 2020 review conference assumes additional importance following the failure of the 2015 review conference to produce a consensus document and the growing frustration of the non-nuclear-weapon states at the lack of action by nuclear powers, particularly the United States and Russia, to deliver on their legally binding disarmament obligations under the 1968 treaty. A second consecutive failure would risk weakening the global nuclear disarmament and nonproliferation regime, including efforts to block nuclear weapons activities by Iran and North Korea.

The May 2-12 preparatory committee meeting, chaired by Henk Cor van der Kwast of the Netherlands, is the first of three conferences leading up to the 2020 review conference. “At the start of a review cycle, one is almost under an obligation to be positive—to see the glass, at least, as half-full,” Dell Higgie, New Zealand’s ambassador for disarmament, told the meeting May 2, while adding, “To suggest that optimism should be the order of the day is not, however, to minimize the challenges we face.”

The next preparatory committee meeting will take place in Geneva in 2018 and will be chaired by Adam Bugajski, Poland’s representative to the International Atomic Energy Agency (IAEA). The review conference likely will be chaired by Rafael Grossi, Argentina’s ambassador to Austria and to international organizations in Vienna.

The preparatory committee discussions covered the three pillars of the NPT: nuclear disarmament, nonproliferation, and nuclear energy. On many issues, there was general agreement.

Many states expressed support for convening a panel of experts on a fissile material cutoff treaty; continuing implementation of the nuclear deal involving Iran; IAEA safeguards, including comprehensive safeguard agreements and the IAEA Model Additional Protocol; the right to peaceful uses of nuclear energy under Article IV of the treaty; and the entry into force of the Comprehensive Test Ban Treaty, which was specifically endorsed in a joint appeal by Japan, Kazakhstan, and the Comprehensive Test Ban Treaty Organization.

The preparatory committee also was united in condemning North Korea’s continued nuclear weapons and missile testing. “Such brazen disregard for international norms and binding obligations is unprecedented in the history of the NPT,” said South Korean Ambassador Kim In-chul on May 8.

The U.S. priority was to show international resolve against North Korea’s nuclear weapons development, Robert Wood, U.S. ambassador to the Conference on Disarmament, said at an April 28 news conference. Sixty-two states condemned North Korea’s actions in a statement submitted May 10 by France and South Korea. The declaration, however, did not deter North Korea from conducting another launch test of an intermediate-range ballistic missile on May 14.

The pace of disarmament and how to establish a WMD-free zone in the Middle East—the two issues that have obstructed past NPT review cycles—continued to elicit disagreement in the 2017 preparatory commission. Many non-nuclear-weapon states consider that the nuclear disarmament pace is too slow, alleging that nuclear-weapon states have failed to fulfill obligations under Article VI of the NPT to “pursue negotiations in good faith on effective measures relating to cessation of the nuclear arms race at an early date and to nuclear disarmament, and on a treaty on general and complete disarmament.” Nuclear-weapon states contend that they have made progress on disarmament in the past decades and advocate a “step-by-step” approach of pursuing practical disarmament initiatives dependent on the security environment.

The tensions on this issue are playing out in UN negotiations, involving about 130 countries, which aim to complete a treaty to prohibit nuclear weapons by July 7 (see "Ban Talks Advance With Treaty Draft", this issue). The nuclear-weapon countries and most U.S. defense treaty allies are boycotting the negotiations.

The division on the ban treaty was particularly apparent during the critiques of the chairman’s summary on the final day of the conference. Strong supporters of the ban treaty, such as Ireland and South Africa, regretted that the issue did not feature more prominently, while the United Kingdom explained that it could not support the summary due to its reference to the nuclear ban. 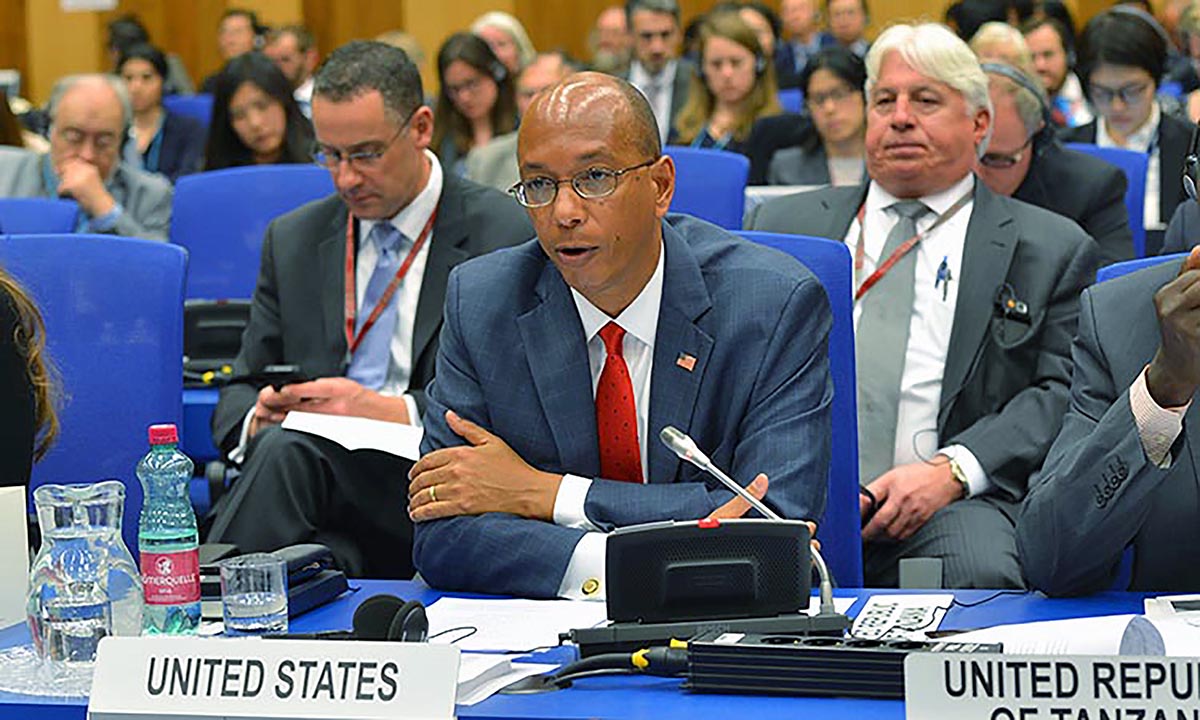 Russia also rejected the ban negotiations. “The conceptual framework of the negotiation process, which in effect ignores the strategic context and addresses the elimination of nuclear weapons in isolation from existing realities, is unacceptable for us,” Russian Ambassador Mikhail Ulyanov said in a May 5 statement.

States were split on how to advance a WMD-free zone in the Middle East, which has been a sticking point among NPT states-parties since the 1995 review and extension conference, when they adopted a resolution calling for practical steps to adopt such a zone. At the 2010 review conference, NPT states-parties put forward five steps in the final document to achieve the WMD-free zone, including the convening of a conference in 2012 on the issue. Unable to reach agreement on an agenda for that conference, the conveners, which included Russia, the UK, and the United States, announced in November 2012 that the meeting, originally scheduled for December, would be postponed. (See ACT, December 2012.)

Disagreement over the WMD-free zone stymied the 2015 review conference. States-parties failed to pass a final consensus document because Canada, the UK, and the United States rejected text proposed by Egypt, which was reflected in the final document, calling for new deadlines to reach agreement on an agenda for advancing the Middle Eastern WMD-free zone. (See ACT, June 2015.) Egypt’s push to include this text in the final document caused a rift among Arab League members, many of whom disagreed with Egypt’s proposal.

The splintering of the Arab League continued into the 2017 preparatory committee, at which the Arab League did not present a unified statement. Egypt, Iran, and a group of 12 Arab League members, including Iraq and the United Arab Emirates, each offered separate working papers on advancing the WMD-free zone in the Middle East. Egypt’s working paper expresses concern over the lack of implementation of the 1995 Resolution on the Middle East and demands that the next review cycle call on Israel to join the NPT.

In its working paper, the group of 12 Arab League states, not including Egypt, also recommended that Israel join the NPT, but emphasized that a conference on the WMD-free zone should take place under the auspices of the three depositories of the treaty: Russia, the UK, and the United States. Russia also criticized the lack of progress toward a WMD-free zone in the Middle East and submitted its own working paper to advance the convening of a conference before the 2020 review conference on the issue.

The United States stated that the conditions necessary for a Middle Eastern WMD-free zone do not currently exist, adding that “misguided attempts to coerce an outcome, or to hold the NPT review process hostage, indicate a misunderstanding of the function and purpose of weapons-free zones.”

In a new development in the NPT review cycles, there were calls from many states for more gender equality in disarmament forums. Ireland submitted a working paper on the subject, and the European Union stated that “promotion of gender equality, gender consciousness and empowerment of women remains a key priority for the EU, including in the area of disarmament and non-proliferation.” Australia, in a May 10 statement, pointed out that there were too few female delegates at the preparatory committee.