Less than 100 days into the administration of President Donald Trump, the war of words and nuclear threats between the United States and North Korea has escalated, and a peaceful resolution to the slow-moving crisis is more difficult than ever to achieve. 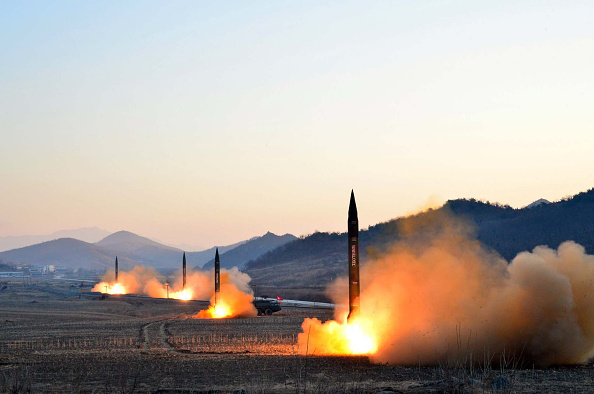 On Jan. 1, North Korea’s authoritarian ruler Kim Jong Un vowed to “continue to build up” his country’s nuclear forces “as long as the United States and its vassal forces keep on [sic] nuclear threat and blackmail.” Kim also warned that North Korea was making preparations to flight-test a prototype intercontinental ballistic missile (ICBM). Two days later, Trump could not resist laying down a “red line” on Twitter, saying, “It won’t happen.”

North Korea has not yet tested an ICBM, but it has restarted its plutonium reactor and appears to be ready to conduct its sixth nuclear test explosion. Unless there is a deal to halt and reverse those efforts, Pyongyang’s nuclear strike capabilities will become more reliable with a longer range and less vulnerable to attack.

Last month, Trump and his team announced a policy of “maximum pressure and engagement” to try to get North Korea to abandon its nuclear ambitions and its ballistic missile program. However, as Vice President Mike Pence told CNN on April 19, the United States is not seeking to negotiate with North Korea “at this time.”

Better enforcement of existing UN sanctions designed to hinder North Korea’s weapons procurement, financing, and key sources of foreign trade is very important. Such measures can help increase the leverage necessary for a diplomatic solution. But it is naive to think China will help apply maximum pressure without a serious opening for talks between Washington and Pyongyang or that pressure alone can force North Korea to change course.

Worse still, Trump has begun to issue ultimatums to China and threats of overwhelming military force against North Korea. On April 3, Trump told The Financial Times that “if China is not going to solve North Korea, we will.” As North Korea paraded its ballistic missile arsenal, including canisters for new ICBM variants, last month, senior U.S. officials warned that “[a]ll options are on the table.”

Such language implies that U.S. strategic forces, including nuclear weapons, could be employed to counter North Korean aggression or possibly to launch a pre-emptive attack on its nuclear facilities and missiles if North Korea tries to conduct an ICBM test. Just as the North Korean nuclear problem cannot be outsourced to China, the United States cannot eliminate the North Korean threat through military means.

Pyongyang has responded to the U.S. statements with its own, even more bellicose rhetoric. Following press reports that a U.S. carrier strike group was being sent toward the Korean peninsula, North Korea’s deputy ambassador to the United Nations warned on April 17 that “a thermonuclear war may break out at any moment” and that his country is “ready to react to any mode of war desired by the United States.”

Attempts by Washington to demonstrate its resolve to use military force to defend allies against aggression may assure nervous leaders in Seoul and Tokyo, but they will not compel Kim to shift course. In fact, repeated threats of U.S. military force only give credibility to the North Korean propaganda line that nuclear weapons are necessary to deter U.S. aggression, and it may lead Kim to try to accelerate his nuclear program.

That should not come as a surprise. Since the beginning of the nuclear age, U.S. “atomic diplomacy” has consistently failed to achieve results. As Jeffrey Kimball and Bill Burr document in their 2015 book, Nixon’s Nuclear Specter, the historical record shows that U.S. nuclear threats during the Korean War and later against China and the Soviet Union, as well as Nixon’s “madman” strategy against North Vietnam, failed to bend adversaries to U.S. goals.

The comprehensive new study Nuclear Weapons and Coercive Diplomacy by Todd Sechser and Matthew Furman provides further confirmation that nuclear coercion is difficult to achieve. Furthermore, as the taboo against nuclear use has become stronger, most leaders come to recognize that the role of nuclear weapons must be limited to deterring first use by others.

Similarly, with respect to North Korea, the threat of pre-emptive U.S. military action is not credible, in large part because the risks are extremely high. North Korea has the capacity to devastate the metropolis of Seoul, with its 10 million inhabitants, by launching a massive artillery barrage and hundreds of conventionally armed, short-range ballistic missiles. Moreover, if hostilities begin, there is the prospect that North Korea could use some of its remaining nuclear weapons, which could kill millions in South Korea and Japan.

Trump and his advisers need to curb the impulse to threaten military action, which may increase the risk of catastrophic miscalculation. A saner and more effective approach is to work with China to tighten the sanctions pressure and simultaneously open a new diplomatic channel designed to defuse tensions and to halt and eventually reverse North Korea’s increasingly dangerous nuclear and missile programs.