“Your association has taken a significant role in fostering public awareness of nuclear disarmament and has led to its advancement.”
– Kazi Matsui
Mayor of Hiroshima
June 2, 2022
U.S. Leads Rising Global Arms Trade

Fueled by armed conflicts in the Middle East and tensions in Asia, global trade in major conventional weapons systems has reached its highest level since the end of the Cold War, according to a report from the Stockholm International Peace Research Institute (SIPRI). 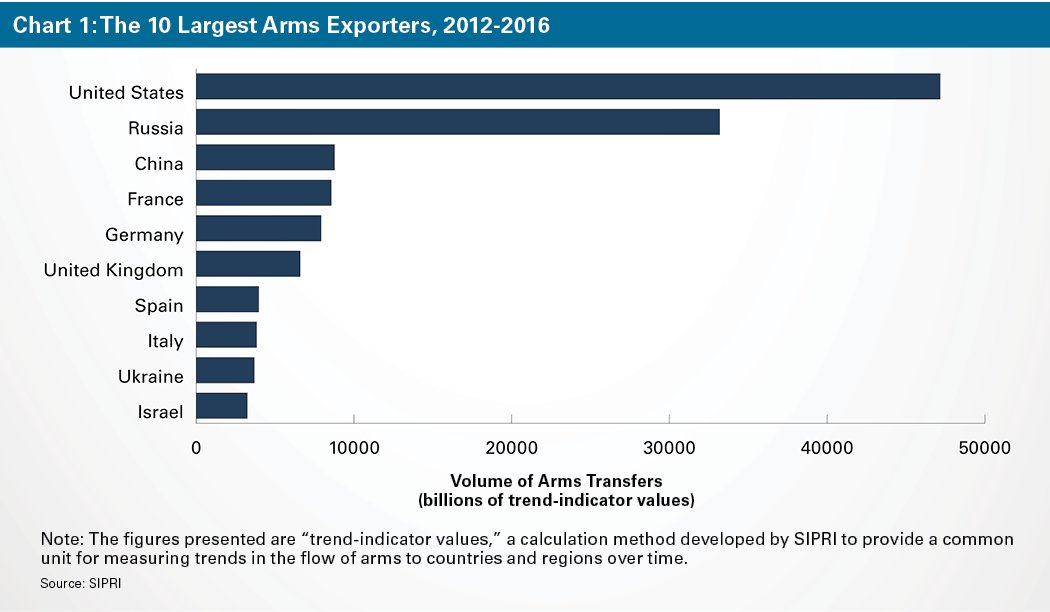 The United States remains the world’s top arms exporter, as it has been since 1990, with Russia as the perennial number two in the most recent period analyzed by SIPRI. Together, the two countries account for more than half of global exports. China, France, Germany, and the United Kingdom each recorded about 5 percent of global exports, rounding out the top six of 57 countries identified as exporters. Although exporting is relatively concentrated among a few countries, only India and Saudi Arabia took more than a 5 percent share of global trade among 155 identified arms importing states.

The SIPRI report, which looks at arms transfers during five-year periods, was issued Feb. 20 and found that no such period since 1990 had as large a level of major weapons systems transfers as during 2012-2016, using a specially designed measure called trend-indicator value that allows for comparisons back to 1950. The measurement provides something of a barometer of global instability because the arms trade embodies countries’ perceived current and future military needs.

During the last five years, efforts to ensure that the global arms trade proceeds responsibly advanced, most notably with the 2013 conclusion of the Arms Trade Treaty. Now with 92 states-parties, the treaty requires the establishment of national export control systems, as well as assessments of whether exported arms would “contribute to or undermine peace and security” or could be used to commit or facilitate serious violations of international humanitarian or human rights law, acts of terrorism, or transnational organized crime. How the accord may slow the growth of the conventional arms trade remains to be seen, with treaty implementation a key topic at this year’s conference of states-parties, planned for September.

During the 2012-2016 period, the United States offered a wide array of weaponry and services and made deliveries to at least 100 countries. In that time, U.S. exports accounted for 33 percent of global arms exports and grew by 21 percent from the previous five-year period. More highly sophisticated systems accounted for some of that increase, including missile defense systems and long-range airborne intelligence, surveillance, and reconnaissance systems. 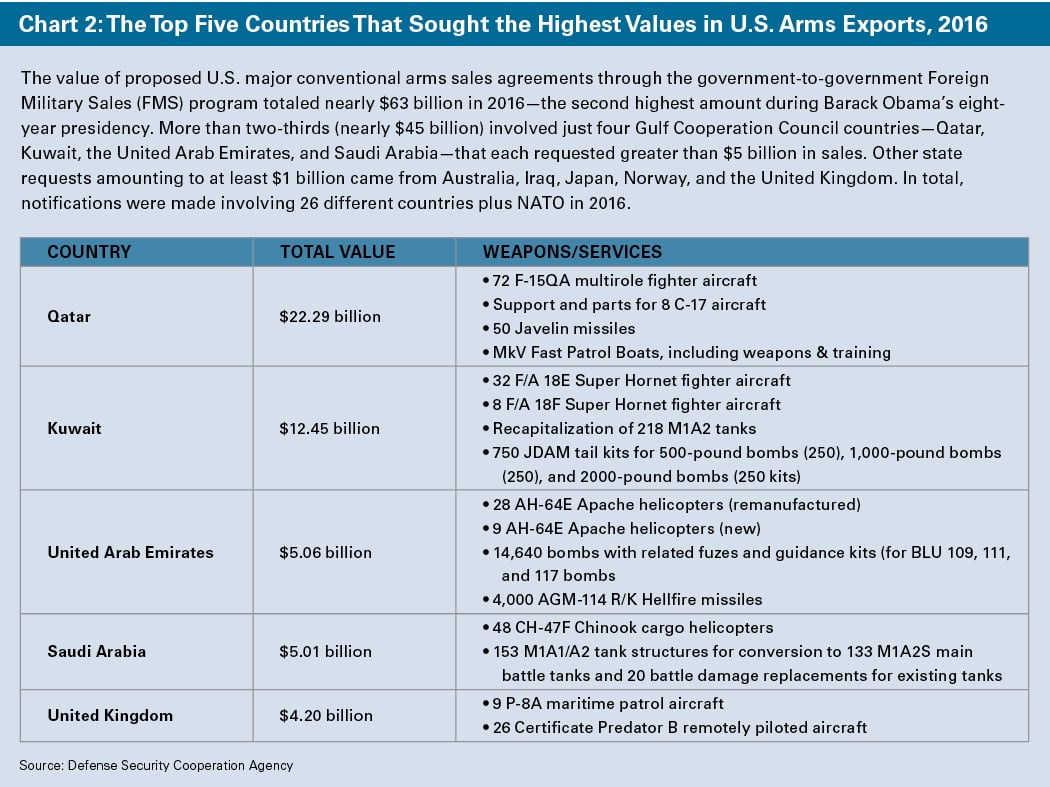 Although Washington sold to a global market, states in the Middle East received nearly half (47 percent) of U.S. arms transfers. With the region mired in multiple conflicts, arms imports by countries there grew by 86 percent in the past five years, far outpacing the growth of any other region. Saudi Arabia imported 212 percent more major weaponry than in the previous five-year period. Other countries in the region also significantly increased their imports.

A Dec. 2016 Congressional Research Service (CRS) report and U.S. arms sales notifications indicate that the Middle East will continue to be a major market for U.S. weapons. Under the Foreign Military Sales (FMS) program, Congress was notified of nearly $63 billion in potential agreements in 2016. More than two-thirds of the value of those deals was with Kuwait, Qatar, Saudi Arabia, and the UAE for fighter aircraft, helicopters, tanks, missiles, bombs, and other weapons (see chart). In the first days of the Trump administration, Congress was notified of another combined $1.04 billion in potential FMS agreements with Kuwait and Saudi Arabia.

Other major suppliers remain active in the Middle East. The United Kingdom and France each accounted for just under 10 percent of arms supplies to the region, according to the SIPRI report, and both have high-value combat aircraft agreements still to fulfill. Russia was second to the United States for agreements with the region, according to the CRS report released in December 2016. Despite criticism, Russia is also intervening militarily in Syria and provided air defense systems to Iran. SIPRI reports, however, that major weapons imports by both Syria’s Assad regime and Iran were “very low” over the past five years.

U.S. and European sales to the Middle East have also been controversial, especially those to Saudi Arabia, which is conducting a war in Yemen during which hospitals and other civilian areas have been bombed. In September, 27 U.S. senators voted for a resolution to block a proposed $1.2 billion sale of tanks and other equipment to Riyadh. (See ACT, October 2016.) In February, a UK High Court heard arguments in a case to review whether UK exports violated UK and European Union law. A decision on the case is expected later this month or in April.

Like the United States, Russian arms exports grew during the past five-year period, but only by 4.7 percent. Moscow accounted for 23 percent of global exports, providing arms to 50 countries as well as rebel forces in Ukraine. India accounted for 38 percent of Russian exports, with Vietnam and China importing an additional 11 percent each.

India, the largest arms importer according to the SIPRI report, increased its imports by 43 percent over the past five years. Both the SIPRI and CRS reports predict that Russia will remain India’s primary arms supplier, but many countries are competing to capture a portion of the Indian arms market. Washington provided 14 percent of India’s imports from 2012 to 2016, according to SIPRI.

China, the largest weapons importer in the early 2000s, is now much more capable of producing its own weapons. Still the fourth-largest global weapons importer, China has emerged as the third-largest exporter, according to SIPRI. Although the in-region countries of Bangladesh, Pakistan, and Myanmar accounted for more than 60 percent of its major weapons exports, a significant percentage of Chinese exports went to Africa (22 percent). Beijing has been responsible for many transfers of small arms and light weapons to the continent, which CRS report author Catherine Theohary writes are likely a “means of enhancing its status…and increasing its ability to obtain access to significant natural resources, especially oil.”