The nonpartisan Congressional Budget Office (CBO) projects that current plans to sustain and upgrade U.S. nuclear forces will cost $400 billion over the next decade, which amounts to about 6 percent of the defense spending anticipated for that period in President Barack Obama’s final budget request to Congress in February 2016. 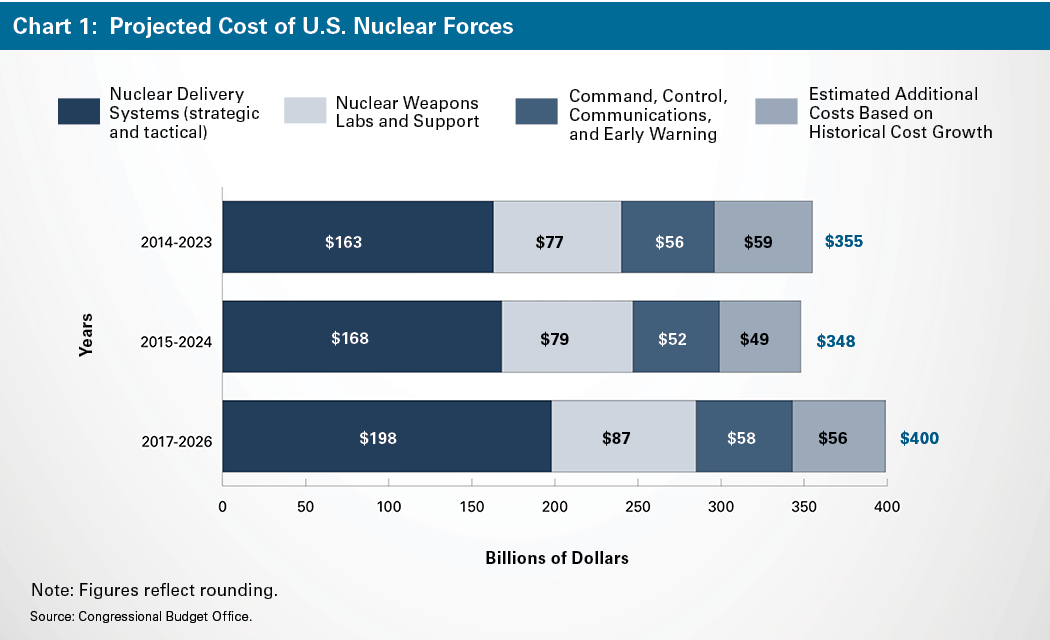 The spending estimate, released in February 2017, is $52 billion more than the CBO’s previous projection published in 2015 and comes as the Trump administration prepares to undertake a comprehensive review of U.S. nuclear weapons policy (See ACT, March 2017.). President Donald Trump has said that he favors unspecified actions to “strengthen and expand” U.S. nuclear capabilities, which could lead to a greater increase in spending than projected by the CBO.

The February report, titled “Projected Costs of U.S. Nuclear Forces, 2017 to 2026,” is the second update of a study first published by the CBO in 2013. (See ACT, January/February 2014.) Lawmakers included a provision in the fiscal year 2013 National Defense Authorization Act that mandated that the CBO prepare a 10-year nuclear cost estimate to assist Congress in making decisions about the future of the arsenal. Congress later amended the provision to require that the CBO update the cost analysis every two years.

The $400 billion estimate captures spending on nuclear delivery systems and command and control systems at the Defense Department and on nuclear warheads and their supporting infrastructure at the Energy Department’s semi-autonomous National Nuclear Security Administration (NNSA). The projection, in then-year dollars, includes inflationary increases expected over the life of the program.

Nearly every element of the U.S. nuclear arsenal is slated to be modernized over the next 20 years. Most of these efforts are in the early stages, and a few others have yet to begin. During the Obama administration, Pentagon and NNSA officials warned about the growing cost, but argued that the modernization is necessary to maintain safe, reliable systems and a credible nuclear deterrent.

In a report last December, the CBO estimated that the U.S. government could save more than $60 billion in required funding over the next decade by reducing the number of nuclear delivery systems and adjusting current nuclear modernization plans while still retaining all three legs of the nuclear triad. 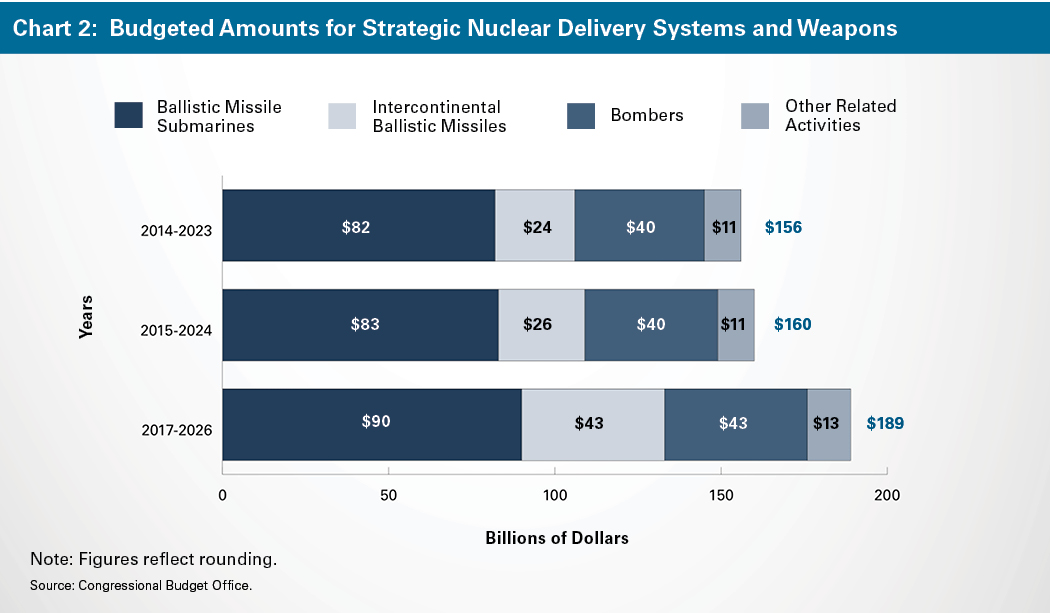 The CBO attributes the $52 billion increase over its 2015 estimate to “the fact that the current estimate spans a 10-year period that begins and ends two years later than the 2015 estimate and thus includes two later years of development in nuclear modernization programs.” The CBO notes that “development costs of weapon systems typically increase as a program proceeds, which means that the current estimate replaces two lower-cost years with two higher-cost years.”

The largest single cost disparity between the 2017 and 2015 reports concerns the spending estimate for intercontinental ballistic missiles (ICBMs). The 2017 report estimates spending for maintaining and modernizing ICBMs to reach $43 billion over 10 years, a $16 billion increase over the 2015 estimate.

For its 2015 report, the CBO “assumed that the existing Minuteman III missiles would be refurbished rather than replaced.” But the current modernization plan for the ICBM leg of the triad is “much larger in scope—and thus is expected to cost more—than the plans that CBO assumed for its 2015 estimate,” according to the CBO. (See ACT, October 2016.)

The CBO estimate also includes $56 billion in “additional costs that would be incurred over the 2017-2026 period if the costs for those nuclear programs exceeded planned amounts at roughly the same rates that costs for similar programs have grown in the past.”