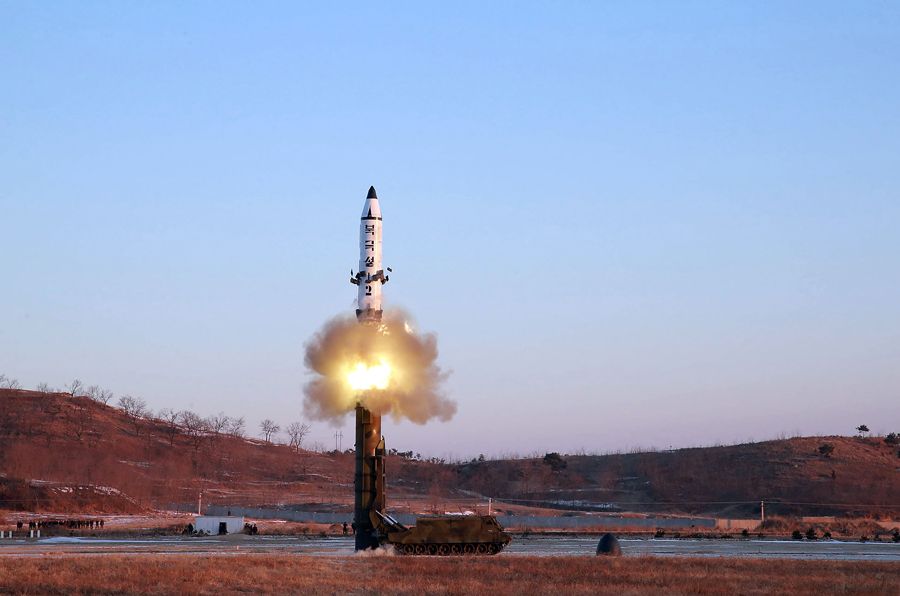 The Korean Central News Agency (KCNA), in a Feb. 13 report, described the missile as a “Korean style new type strategic weapon system” and called the test a success. The report said that leader Kim Jong Un had the system developed based on the indigenously developed Pukguksong-1, which international weapons analysts call the KN-11.

The missile flew approximately 500 kilometers, but was tested at a lofted trajectory that the KCNA said was done to take into account the security of neighboring countries. Experts assess that the missile, if flown a standard trajectory, would have a range of approximately 1,200 kilometers, which is similar to the assessed range of the submarine variant and puts it in the category of a medium-range ballistic missile. When deployed, the Pukguksong-2 will likely be nuclear capable.

North Korea has other land-based, medium-range ballistic missiles, but they are liquid fueled. Solid-fueled ballistic missiles require less support because they are not fueled at the launch site, making them more difficult to track and pre-empt.

North Korea also used a technique for launching the missile that is similar to a submarine launch. The Pukguksong-2 was ejected from the canister using compressed gas. The rocket engine ignited after the launch, which protects the vehicle from the worst of the heat from the launch.

Pollack said there are aspects of the vehicle that resemble Soviet-made TELs, but the newly displayed model appears to be unique. There are some externally visible components of the TEL that match those of tanks and other tracked vehicles produced in North Korea, he said. The site where the missile was tested is a proving ground for tracked vehicles located near North Korea’s Kusong tank factory, he said.

North Korea’s development of an indigenous TEL production capability is unfortunate because launch vehicles were a “noticeable area of weakness in North Korea’s missile program” and Pyongyang has until now relied on foreign suppliers for TEL chassis, Pollack said. North Korea has displayed several different missiles, including intercontinental ballistic missiles, on wheeled vehicles produced in China and adapted by Pyongyang to transport and launch missiles.

Pollack’s hypothesis is that North Korea is currently unable to reliably import wheeled vehicles to use for missile launchers, so Pyongyang is falling back on track technology that it already knows how to produce. When denied sensitive technology, North Korea’s “general strategy is to turn to domestic production” wherever possible, he said.

Pollack, who is also the editor of The Nonproliferation Review, said using tracks instead of wheels on the launch vehicle is a “double-edged sword.” Although tracks allow a vehicle to traverse more difficult terrain, other things being equal, the vehicle will move more slowly than a wheeled counterpart, he said.

The Trump administration is currently reviewing its policy toward North Korea. During his confirmation process, Secretary of State Rex Tillerson said that he would work “closely with…interagency colleagues to develop a new approach to proactively address the multitude of threats that North Korea poses to its neighbors and the international community.”