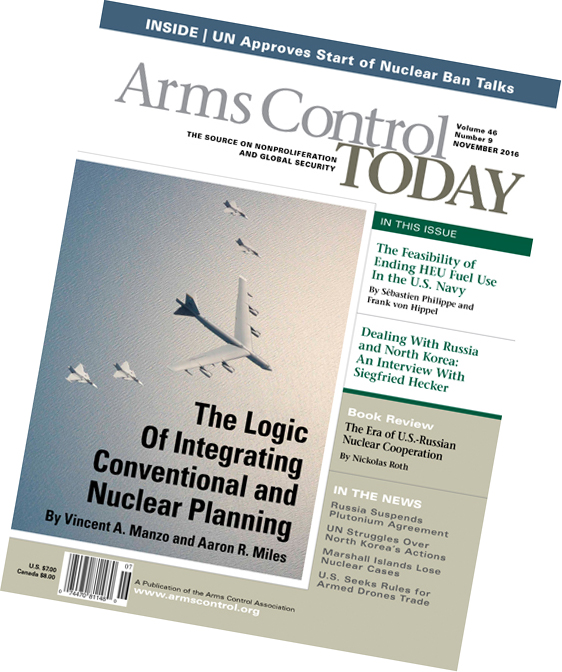 In the November 2016 edition of Arms Control Today, Vincent Manzo and Aaron Miles attempt to define and defend what they call the “logic of integrating conventional and nuclear planning.” Their logic is neither clear nor compelling. They make assertions regarding the benefits of “integration” to U.S. national security based on no more than psychological guesswork about how potential adversaries might behave in a crisis or ongoing conflict.

The authors claim that such integration is essential for “managing escalation” in a conventional conflict. This statement implies that managing escalation so that nuclear weapons are not used or restricting their use to a very small number of detonations is something that military strategists know how to do. Neither Manzo, Miles, nor any other military officials or security policy advisers know how to manage or control the potential for escalation from a conventional to nuclear war and certainly not from the extremely unstable phase of conflict during which a small number of nuclear weapons has been used to a full-scale nuclear war.

We can never have confidence in controlling this escalatory space because we cannot know or control the decision-making of potential adversaries. Nuclear deterrence is a blunt instrument that cannot be tailored to evoke particular responses in particular situations. We can never conclusively measure the effectiveness of strategies to deter nuclear use or manage escalation. We cannot effectively communicate subtle messages of resolve or restraint in the fog of war. To think otherwise is dangerous hubris and leads to high-risk strategy that is prone to failure in a crisis.

The only tool that we have to deter an adversary from using nuclear weapons is to threaten severe consequences and hope the adversary perceives the risks in the way we intend them to be perceived. That is why the United States and its allies must keep the threshold for nuclear use as high as possible. In the European context, this means having the ability to defeat any potential Russian conventional attack on NATO with conventional military force. In Asia, it means maintaining the military capability to defend Japan, South Korea, and Taiwan without resort to nuclear weapons.

If Russia or any other state were to escalate to the use of tactical nuclear weapons, the United States and its allies have always maintained limited nuclear options that could be employed. Currently, these include the B61 nuclear bomb and the W80 cruise missile warhead that can be employed with a yield of five kilotons or less. The improved B61-12 nuclear bomb, to be deployed in 2022, will have even more capability for “tactical” strikes. But the United States should always declare that even tactical nuclear use would be a last resort and keep such capabilities and the rhetoric regarding their use recessed and nonprovocative.

Why? For precisely the reason mentioned above, which is that we have no confidence that nuclear war, once initiated, could be kept limited. This conclusion was reached in 1983 after senior U.S. national security decision-makers incorporated top-secret U.S. war plans into the most realistic war-game exercise involving nuclear weapons ever conducted by the U.S. government. During this exercise, the U.S. and allied military officers who played the Soviet side interpreted small “tactical” nuclear strikes as an attempt to destroy the Soviet Union and responded with an enormous nuclear salvo against the United States. The United States responded in kind, destroying much of civilization.

In summary, Manzo and Miles bring nothing new to the conversation on limited nuclear war and escalation. The recommendation to increase the ability of our forces to operate in a nuclear environment is a sound one, but that does not require the acquisition of new nuclear weapons or changes in declaratory strategy. They offer no convincing evidence that increasing the visibility of U.S. military planning for the transition between conventional and nuclear war will make it less likely that the deadly threshold to nuclear war will remain uncrossed in a conflict. Rather, potential nuclear adversaries are likely to see such planning as an indication that our adversity to nuclear use in response to conventional crises has decreased, an outcome that undermines global stability and raises the risks of nuclear war.