The UN Security Council issued a statement condemning a North Korean missile test last month, but has yet to pass a resolution in response to the underground nuclear test explosion Pyongyang conducted in September.

According to a statement from U.S. Strategic Command, North Korea attempted to launch a Musudan intermediate-range ballistic missile on Oct. 14 from an airfield near Kusong, a city in the northwestern part of the country. The missile exploded shortly after liftoff. The missile has an estimated range of 3,000 kilometers with a 750-kilogram payload. 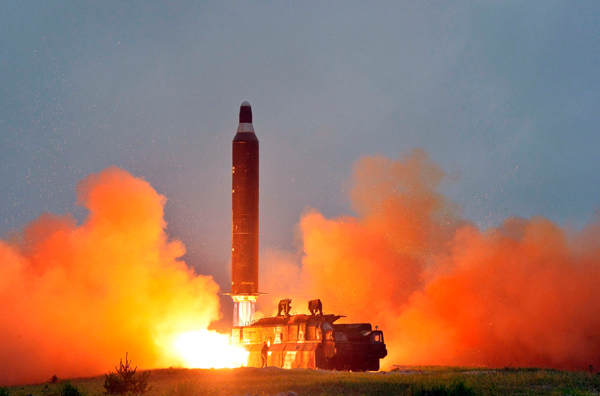 Vitaly Churkin, Russia’s ambassador to the United Nations and president of the Security Council, said in an Oct. 17 statement that council members condemned the test as a “grave violation” of past Security Council resolutions and that North Korea’s ballistic missile activities “increase tension.”

He called on all member states to “redouble their efforts to implement fully” the sanctions imposed on North Korea and reiterated the Security Council’s commitment to finding a way to reduce tensions on the Korean peninsula.

Just days after Churkin’s statement, North Korea attempted another launch, presumably of a Musudan. The Oct. 19 test, which also took place near Kusong, failed. North Korea has tested the Musudan eight times in 2016. Only one launch, in June, was successful.

The council is discussing a new resolution expanding sanctions on North Korea in response to its Sept. 9 nuclear test, but has yet to agree on a text. (See ACT, October 2016.)

During a trip to Seoul, Samantha Power, U.S. ambassador to the UN, called negotiations over the resolution “intense” and said that there are political and technical issues involved in the talks over new sanctions. Power said that the United States wants a resolution that “makes a substantive difference and changes the calculus over time of the North Korean leadership” and that officials are “working around the clock” to quickly secure passage of a resolution.

Secretary of State John Kerry and Defense Secretary Ash Carter met with their South Korean counterparts in Washington on Oct. 19 to discuss a range of issues, including the threat posed by North Korea’s nuclear and missile programs.

In a news conference following those talks, South Korean Foreign Minister Yun Byung-se said that Washington and Seoul agreed during the meeting to “use all available tools” to “beef up pressure and sanctions” on North Korea.

Kerry and Carter “have reaffirmed that the U.S. will defend South Korea from any and all North Korean threats through extended deterrence, encompassing all parameters of defense capabilities, including nuclear umbrella, conventional, and missile defense,” Yun said. “They also made it loud and clear that Pyongyang will be met with effective and overwhelming responses should it resort to nuclear weapons.”

The top U.S. intelligence official effectively buried the Obama administration’s effort to force North Korea to give up all its nuclear weapons, but in doing so, he opened the way for the next president to pursue a different approach to dealing with Pyongyang.

Director of National Intelligence James Clapper said Oct. 25 that the best that can be achieved diplomatically may be limiting further advances in North Korea’s nuclear weapons program and even that, if possible, would require offering Pyongyang “significant inducements.”

“I think the notion of getting the North Koreans to denuclearize is probably a lost cause,” he said at an event held by the Council on Foreign Relations. “They are not going to do that. That is their ticket to survival.”

North Korea is thought currently to have enough plutonium for approximately six to eight weapons and the capacity to produce six to eight a year, according to U.S. officials and private analysts. The intelligence community previously assessed that North Korea has been able to develop a warhead that could be mounted on a missile, Clapper said.

The six-party negotiations between North Korea and China, Japan, Russia, South Korea, and the United States collapsed in 2009, leaving North Korea to advance its weapons programs. The Obama administration has pursued a policy of “strategic patience,” which includes international sanctions and Chinese diplomacy to induce North Korea to return to denuclearization negotiations.

As recently as Sept. 9, following a North Korean underground nuclear test explosion, President Barack Obama said in a statement that “the United States does not, and never will, accept North Korea as a nuclear state.”

Clapper said his views in part draw on his visit to Pyongyang, the North Korean capital, in 2014 on a mission to gain the release of two Americans. “I got a good taste of that when I was there about how the world looks from their vantage [point],” he said. “They are under siege, and they are very paranoid. So the notion of giving up their nuclear capability, whatever it is, is a nonstarter with them.”

Asked about whether there may be prospects for an Iran-type accord to roll back North Korea’s nuclear weapons capabilities, Clapper said, “I don’t think so.”

“The best we could probably hope for is some sort of a cap,” he said. “But they’re not going to do that just because we ask them. There’s going to have to be some significant inducements.”