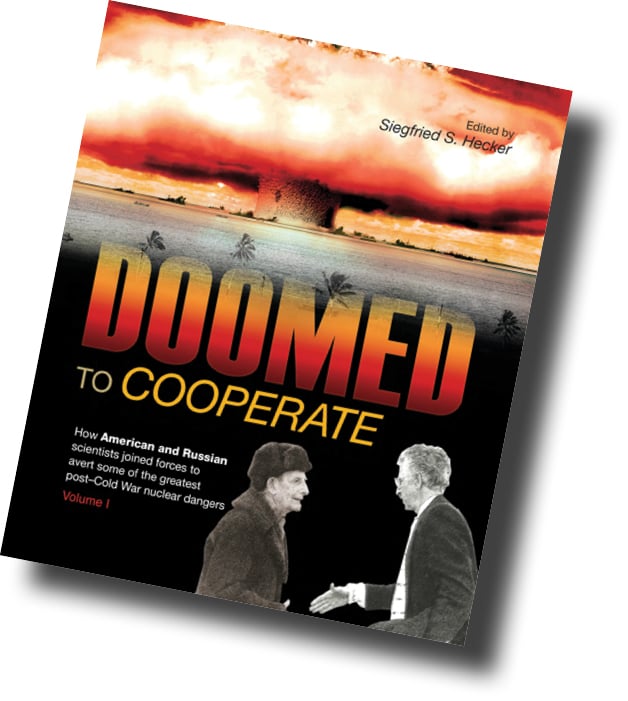 The social and economic chaos of the Soviet Union’s collapse engulfed its nuclear weapons complex as well, potentially putting at risk thousands of nuclear weapons and enough nuclear material to make tens of thousands more. Recognizing the danger this posed to the world, U.S. and Russian scientists in 1992 began an unprecedented two-decade-long collaboration focused on strengthening Russian nuclear safety and security, reducing proliferation risks, and advancing nuclear science. Policymakers put their jobs on the line, and committed scientists who were designing ways of obliterating one another’s countries only months earlier set aside differences to make possible this effort, known as lab-to-lab cooperation. Their story is the subject of Doomed to Cooperate.

The two-volume set, edited by former Los Alamos National Laboratory Director Siegfried Hecker, a key U.S. figure in the lab-to-lab work, is one of only a handful of sources and by far the most comprehensive in which participants offer firsthand accounts of what they did, the obstacles they encountered, the solutions they improvised, and more. The book will stand as the standard reference on their work for years to come. Unfortunately, although Hecker’s narrative effectively weaves together those accounts, there is so much raw material in the book that it is sometimes difficult to unearth its gems.

The volumes include testimonies of more than 100 Americans and Russians involved in different elements of the lab-to-lab cooperation. More than 90 articles are organized into six sections describing different aspects of the cooperation. The first volume summarizes the multiyear process of laying the groundwork for lab-to-lab cooperation and joint work involving nuclear weapons and nuclear materials safety and security. The second volume focuses on joint efforts to prevent “brain drain” within the Russian nuclear establishment and the proliferation of nuclear expertise, as well as on broader cooperation on nuclear science and stockpile stewardship.

Doomed to Cooperate provides important lessons for policymakers in each country who, just as they were more than two decades ago, are scrambling to cope with the rapidly changing relationship between the world’s two largest nuclear superpowers. The title reflects the seemingly anachronistic perspective of the scientists who found, as Russian former First Deputy Minister of Atomic Energy Lev Ryabev put it, that the “problems posed by nuclear energy or nuclear weapons activities were global and interconnected.” Therefore, the United States and Russia were “doomed to work on these things together, which pushed us toward cooperation.”

These volumes provide a chorus of on-the-ground perspectives from Russian and U.S. lab-to-lab participants about the importance of nuclear cooperation for the benefit of both nations and the broader world. The book’s central message, coming at a time when communication between the United States and Russia has been mostly reduced to military posturing, is that continued scientific cooperation between the United States and Russia is critical for national security and scientific advancement.

Mutual respect and a growing trust formed the foundation of the relations between U.S. and Russian nuclear weapons scientists. Hecker observes that “scientists and engineers want to create new knowledge, develop new technologies, and build things. Doing so together in early lab-to-lab projects built professional respect, which, in turn, made it easier to establish trust. We formed true partnerships that benefited both sides.” Russians were eager to collaborate with Americans whom they considered their scientific peers. U.S. nuclear weapons scientists wanted to develop a greater understanding of their Russian counterparts and were concerned about how the collapse of the Soviet Union was degrading Russian nuclear weapons safety and security. 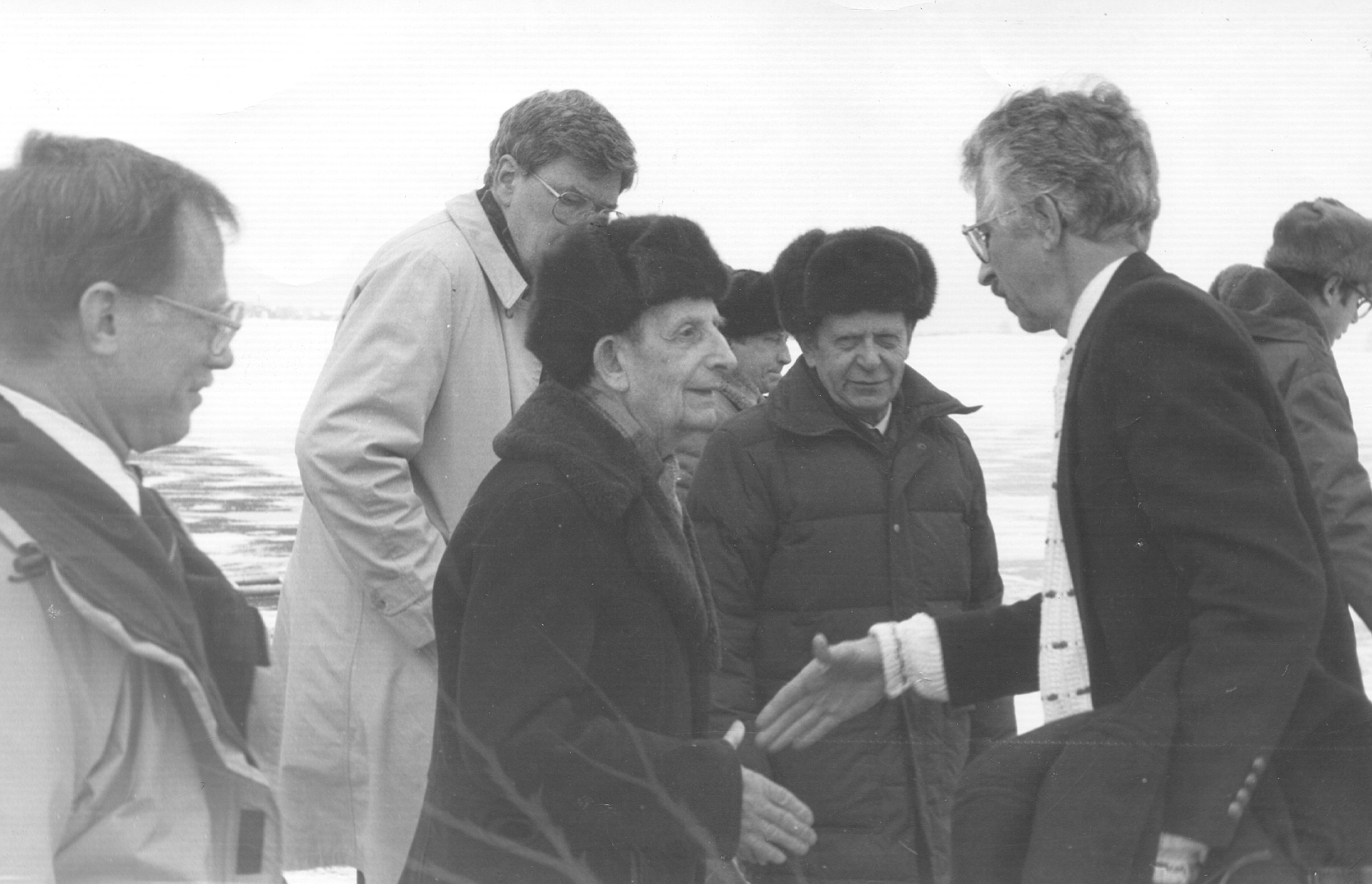 This relationship developed slowly and was built on the groundwork laid in earlier work, beginning with the 1988 U.S.-Russian Joint Verification Experiment. The purpose of the experiment was to develop more accurate systems for measuring nuclear explosions. Yet, as Viktor N. Mikhailov, who eventually became the head the new Ministry of Atomic Energy and was one of the key Russian figures in ensuring the success of the lab-to-lab program, described the cooperation, the real benefit was “the chance for interpersonal communications with the American nuclear physicists.”

The relationships that began during the experiment and the dialogue that followed inspired Hecker in 1992 to invite Russian nuclear weapons lab directors Vladimir A. Belugin of the All-Russian Scientific Research Institute for Experimental Physics (VNIIEF), located in the city Sarov, and Vladimir Z. Nechai of the All-Russian Scientific Research Institute for Technical Physics located in the city Snezhinsk, to visit U.S. nuclear weapons labs and for Russian lab directors to reciprocate (the Soviet Union considered both nuclear research cities such a secret that they did not even appear on Soviet maps). These meetings, which were the first time U.S. and Russian lab directors had visited the other’s facilities, were the catalyst for lab-to-lab cooperation.

Soon after, lab-to-lab cooperation began making major strides in the field of nuclear science. Over the years, U.S.-Russian cooperation covered a wide range of areas, including experiments generating some of the strongest magnetic fields ever produced, work furthering understanding of plutonium, and activities that advanced computer modeling. It also helped to further health research in both countries. Just two of the laboratories participating in lab-to-lab work, Los Alamos and its Russian counterpart VNIIEF, produced more than 400 research papers that were published or presented at conferences.

Cooperation extended to the safety and security of Russian nuclear materials under a January 1993 agreement signed by U.S. and Russian lab directors. This covered work on material protection, control, and accounting, where arguably the greatest achievements in lab-to-lab cooperation occurred. U.S. and Russian scientists conducted joint vulnerability assessments, designed equipment, and made physical protection system upgrades throughout the Russian nuclear complex. Early success in enhancing security at the Kurchatov Institute and VNIIEF led to more robust cooperation enhancing security at Russian naval and strategic rocket sites, where warheads were actually stored. Absent this cooperation, the risk of nuclear terrorism likely would be significantly higher than it is today.

The joint work increasing security for warheads at military sites is a testament to how far the level of mutual respect and trust had grown. It was an incredible risk for Admiral Vladimir Kuroyedov, commander-in-chief of the Russian Navy, to allow U.S. nuclear weapons lab officials into Russian nuclear weapons storage sites. Early on, Russian officials would only allow a limited number of U.S. personnel at naval sites.

Russian officials also required that U.S. work with the navy be kept a secret. “We were not allowed to tell anyone outside of our program, in Washington or among colleagues at the labs, what we were doing. We promised we wouldn’t talk about this work and that we would safeguard their sensitive information. While the information was not classified, we kept everything protected as if it were secret,” said Byron Gardner, who led the U.S. site security upgrade program. This also required significant trust from U.S. officials, including Rose Gottemoeller, who, as deputy undersecretary of energy for defense nuclear nonproliferation, had “moved mountains,” in Gardner’s words, to secure approval for U.S. cooperation with the Russian Navy.

Today, the political environment for U.S.-Russian cooperation is far different than it was 20 years ago. Nuclear cooperation between the two countries had been slowly declining for some time, but things truly fell apart in 2014. Responding to the conflict in Ukraine, the United States cut off cooperation with Russia on nuclear energy. In response but also as a result of long-standing disagreements over implementation, Russia cut off nuclear security cooperation with the United States. Since then, the relationship has eroded further. This year, Russia suspended an agreement with the United States to verifiably eliminate plutonium stocks, citing problems with the broader political relationship between the two countries; suspended a 2013 U.S.-Russian agreement for nuclear energy research and development; and terminated an arrangement on feasibility studies for converting Russian research reactors from using highly enriched uranium to low-enriched uranium.

Practically speaking, the impact of Russia’s decision to cancel these cooperative initiatives was negligible because the plutonium disposition agreement needed to be renegotiated, no research and development cooperation was taking place, and the feasibility studies had been completed. Yet, these actions sent a clear message that Russian leaders presently are opposed to even the most rudimentary nuclear cooperation with the United States. 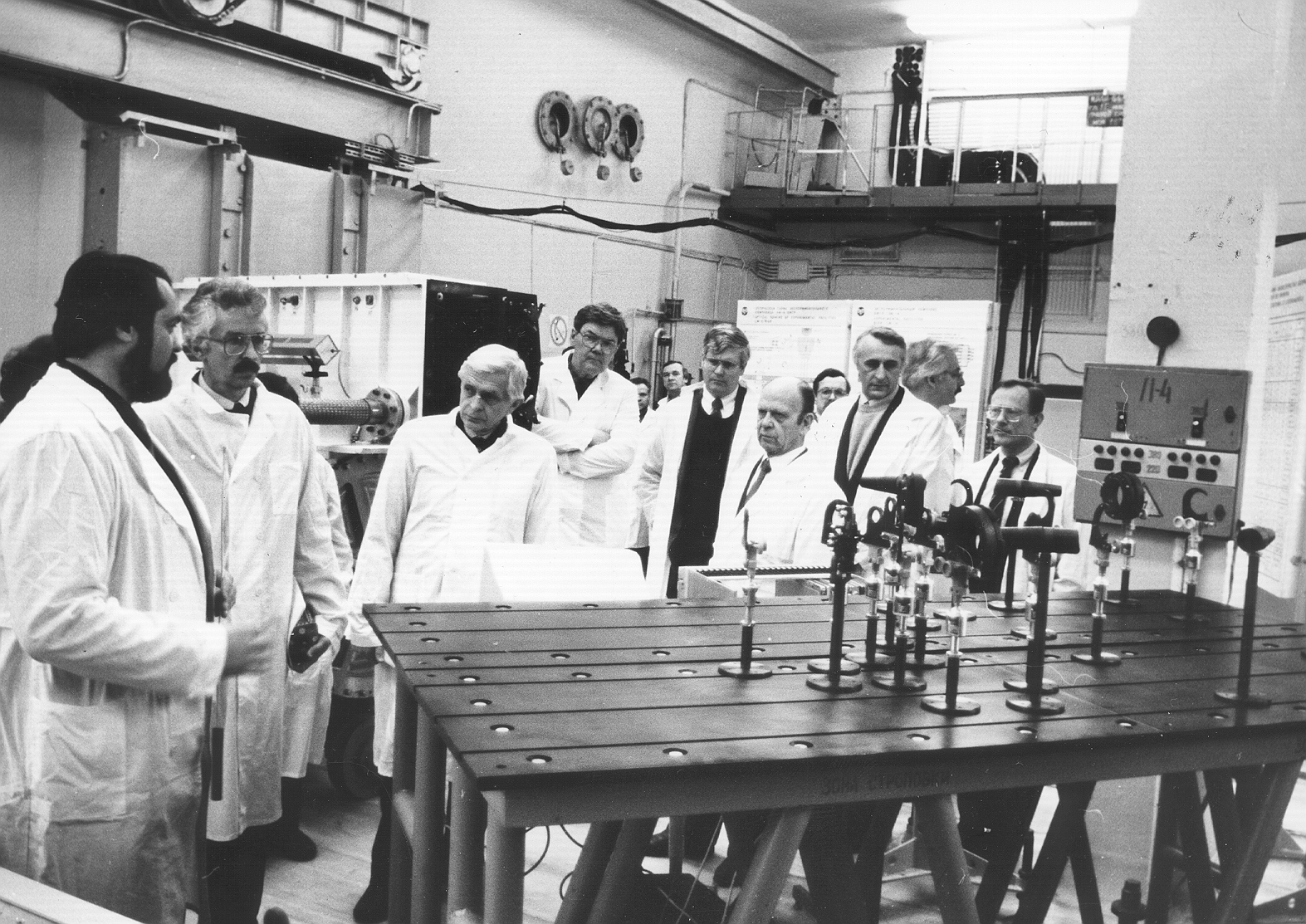 The U.S.-Russian relationship has become so damaged that even production of this book was affected. Doomed to Cooperate was originally supposed to be a collaboration between Hecker and his Russian colleagues Evgeny Avrorin and Rady Ilkaev (his counterparts as directors of the two main Russian nuclear weapons laboratories during the peak of lab-to-lab cooperation) and published in English and Russian. In 2015, Hecker’s Russian colleagues informed him that the political circumstances “would no longer allow” them to publish a single book. Instead, Avrorin and Ilkaev are going to publish a Russian edition with their own separate overviews and introductions, different from those that appear in the English version.

As the testimonies in Doomed to Cooperate demonstrate, the personal relationships between U.S. and Russian scientists that developed in the waning years of the Cold War were critical in addressing the unanticipated challenges that came after the fall of the Soviet Union. Despite significant suspicion between the United States and Russia, these relationships were what eventually led to the mutual trust and respect necessary for cooperative work reducing the threats of nuclear terrorism and proliferation. Today, scientific cooperation remains essential for addressing challenges such as terrorism, climate change, and nuclear proliferation and will likely be critical in addressing many others not yet anticipated. If the United States and Russia are to face the threats of the 21st century, they must rebuild the strong relationship between their scientific communities.

Nickolas Roth is a research associate at the Project on Managing the Atom in the Belfer Center for Science and International Affairs at the John F. Kennedy School of Government at Harvard University.