China is expanding its arsenal of nuclear-capable ballistic missiles to ensure the viability of its nuclear deterrent, according to an annual report to the U.S. Congress from the Defense Department.

The report, titled “The Military and Security Developments Involving the People’s Republic of China 2016” and released last month, noted an expansion in the number of China’s nuclear-capable intercontinental ballistic missiles (ICBMs) and the development of a new intermediate-range ballistic missile, the DF-26. 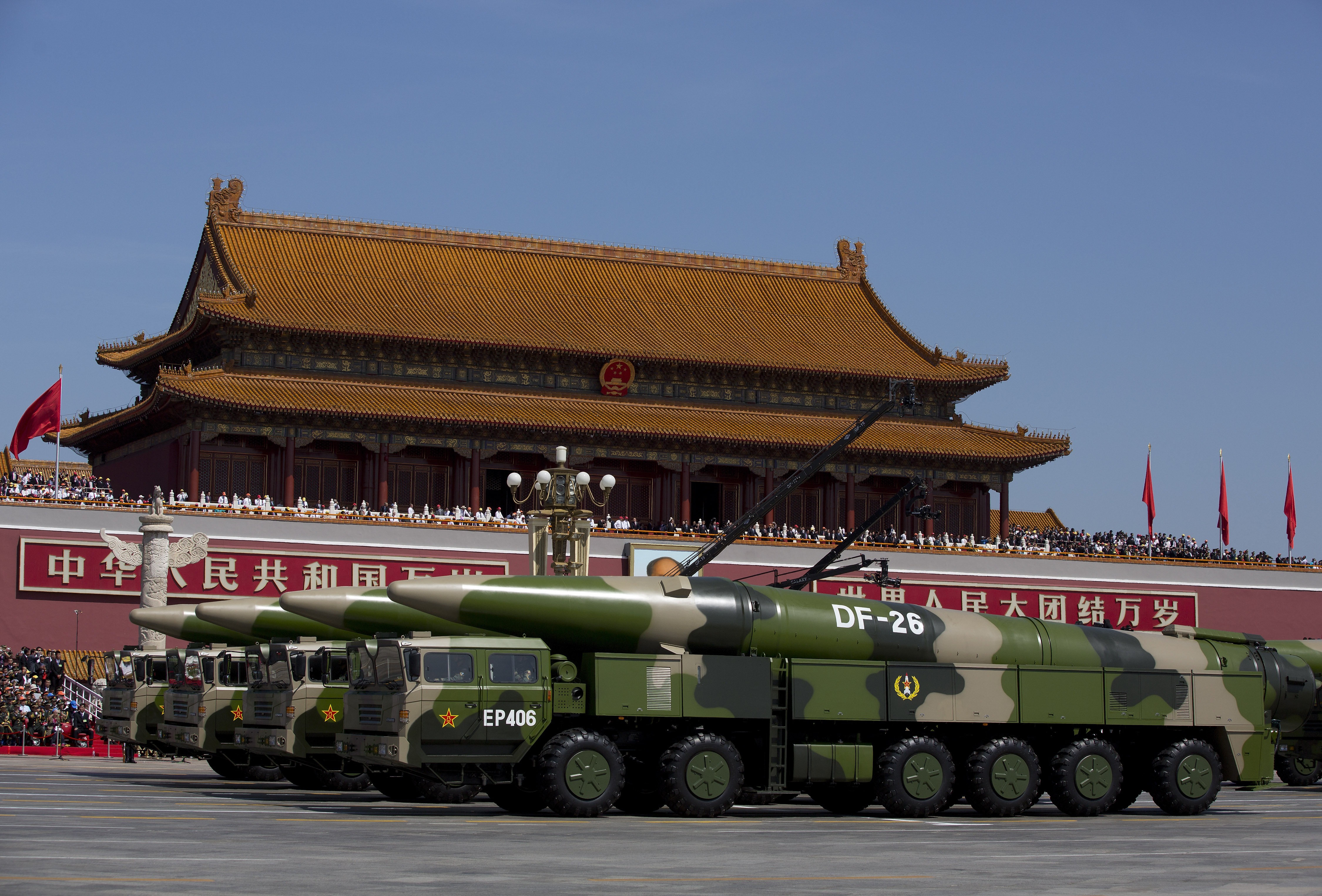 The 2016 report said that these missiles have capabilities, including multiple independently targeted re-entry vehicles (MIRVs), that are “intended to ensure the viability of China’s strategic deterrent in the face of continued advances” in areas such as ballistic missile defense and precision-strike capabilities by the United States and, to a lesser extent, Russia.

Precision-strike capabilities utilize advanced guidance systems to hit targets more accurately, which threatens China’s ability to execute a second strike in the event of an attack.

The DF-26 is China’s first ballistic missile in the intermediate range and was unveiled for the first time in September 2015. When China deploys the nuclear variant of the DF-26, it would give Beijing its “first nuclear precision strike capability against theater targets,” according to the 2016 report.

U.S. military bases in Guam would be within range of the DF-26.

Abraham Denmark, deputy assistant secretary of defense for East Asia, said in a May 13 press briefing that China’s development of the DF-26 is an example of Beijing’s investment in military programs and weaponry that are designed in part to “improve power projection.”

The 2016 report estimated that China has between 75 and 100 road-mobile and silo-based ICBMs, up from the 50 to 60 ICBMs noted in the 2015 edition of the report. The increase in ICBMs came as a surprise to a number of experts.

In a May 18 article for Strategic Security, the blog of the Federation of American Scientists, Hans Kristensen wrote that the increase in ICBMs is “inconsistent” with previous reports, which have listed the same number of missiles as missile launchers or slightly higher as the DF-4 ICBM launchers can be reloaded. Kristensen, director of the nuclear information project at the federation, wrote that the rationale is unclear for reporting a sudden increase in missiles to 25 more than the number of launchers.

The 2016 report did not indicate that China deployed any new ICBM variants since the last report, but noted that a road-mobile ICBM still under development, the DF-41, is capable of carrying MIRVs. The 2015 report only said the DF-41 was “possibly capable” of carrying multiple warheads.

According to the report, China deploys an ICBM, the DF-5B, that is equipped with MIRVs. Li Bin, a senior associate at the Carnegie Endowment for International Peace, said at a May 5 event hosted by the group that it is unclear if China has deployed MIRVs on any DF-5B ICBMs. He argued that it would be more logical for China to use decoys on the missile instead of additional warheads.

Bin said China’s nuclear activities are not designed to seek parity with any other country but to demonstrate that Beijing is not “lagging” behind technological developments. Perception of a lag could invite aggressive actions from other countries, Bin reasoned.

The 2016 report also revised the estimate for China’s Jin-class ballistic missile submarines to begin conducting deterrent patrols. The 2015 report assessed that China would begin deterrent patrols in late 2015, whereas the 2016 report says “sometime in 2016.” China currently has four operational Jin-class submarines and a fifth under construction. The submarines are armed with the JL-2 submarine-launched ballistic missile (SLBM). The JL-2 has an estimated range of 7,200 kilometers.

Despite the assertion in the 2016 report that the Jin-class submarines have not yet conducted a deterrent patrol, the report notes that the submarines are “China’s first credible, sea-based nuclear deterrent.”

On a deterrent patrol, a submarine would carry nuclear-armed SLBMs.

China’s first-generation Xia-class submarine is believed to have been a technology test bed that never conducted a deterrent patrol.