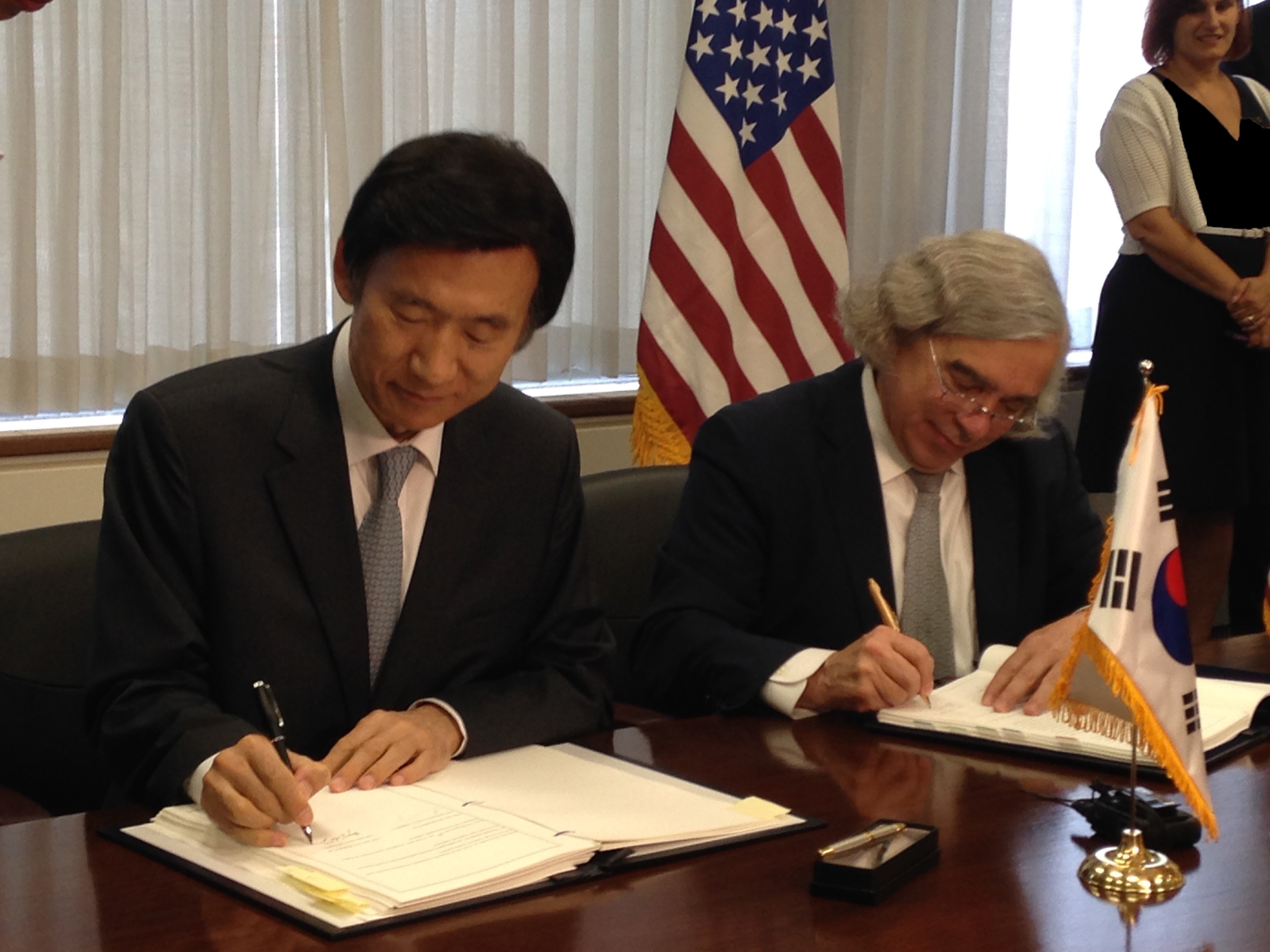 South Korea and the United States on June 15 signed an agreement for peaceful nuclear cooperation after years of talks that had been bedeviled by the need to square U.S. nonproliferation policy with South Korean aspirations to develop its nuclear fuel cycle and be recognized as an equal nuclear partner.

One bone of contention has been the issue of whether the United States would provide so-called advance consent for South Korean sensitive nuclear activities that fall under the agreement. The pact provides such consent for relatively noncontroversial activities, but not for uranium enrichment or for pyroprocessing, a spent fuel treatment process that South Korea is pursuing and that Washington considers to be a form of reprocessing.

Through an ongoing, joint fuel-cycle study and a high-level bilateral commission that is established by the agreement and two supplementary documents, the new accord “contains pathways” toward a “possible” U.S. decision “to grant advance consent to [South Korea] to enrich or pyroprocess U.S.-obligated nuclear material,” according to the agreement’s Nuclear Proliferation Assessment Statement (NPAS). The NPAS, which is required under U.S. law, is one of the documents that accompanied the text of the agreement in a package that President Barack Obama sent to Congress on June 16.

Under the 1978 Nuclear Non-Proliferation Act, U.S. nuclear cooperation agreements must include language saying that the partner country may not undertake activities such as uranium enrichment and spent fuel reprocessing under the agreement unless Washington first consents to those activities.

In the agreements with Japan, Euratom, and India, the United States provided consent for the life of the agreement. Under a proposed agreement that is now before Congress, China would receive similar consent. South Korea was seeking a similar arrangement.

In 2011, South Korea and the United States began a joint study on pyroprocessing, which is due to be completed in 2021. Once the study is finished, the two sides “shall consult with a view to identifying appropriate options for the management and disposition of spent fuel subject to the Agreement and for further development or demonstration of relevant technologies,” according to the new agreement. The consultations are to take place “as promptly as possible so that nuclear energy programs of either Party would not be unduly hampered” and are to be under the auspices of the high-level commission. That body is to be headed by the U.S. deputy secretary of energy and the South Korean vice minister of foreign affairs.

The agreement lists the criteria that the study is to use in assessing pyroprocessing—technical feasibility, economic viability, and nonproliferation acceptability. The two countries also must agree that the technology “does not significantly increase the risk of proliferation and ensures timely detection and early warning of diversion.”

In addition, the two sides have to agree that pursuing pyroprocessing “avoids the buildup of stocks of group actinides in excess of an amount that is reasonably needed.” The term “actinides” refers to a series of metallic elements in the periodic table, some of which are potentially usable as nuclear explosives.

A former U.S. official who worked on nuclear cooperation agreements said the last provision does not appear in other pacts and reflects the current U.S. policy on limiting the amount of separated plutonium. U.S. officials “don’t want to see another Japan happen,” he said in a July 3 interview, referring to Japan’s accumulation of separated plutonium well in excess of the country’s ability to use the material in its nuclear reactors.

That document acknowledges that the determination of whether a technology significantly increases the risk of proliferation is “subjective” and says that the proposed agreement gives the secretary of energy the “latitude” to make that determination, as required by the Atomic Energy Act.

The agreement makes clear that the potentially proliferation-sensitive activities can proceed only through mutual consent, but a former congressional staffer expressed concern that U.S. officials ultimately would accede to the South Korean requests. “For years, I’ve watched Americans forget that it’s through mutual consent. Friends are often harder to say no to” than enemies, he said in a June 30 interview.

In a July 2 interview, a congressional analyst said the structure of the agreement is “intended to allow each side to spin it positively.” The United States can say it did not give advance consent to pyroprocessing, and South Korea can say that the pact does not foreclose that possibility “forever,” he said.

He noted that the agreement’s duration is 20 years, with provision for a five-year extension. That time frame would allow the Koreans to revisit the contested issues relatively soon if they are not satisfied with the pace of progress, he said. U.S. nuclear cooperation agreements generally have had terms of at least 30 years, some of which allow for an unlimited number of five-year extensions. The shorter time frame in the new agreement was at the insistence of the South Koreans, the analyst said.

The former U.S. official agreed that the new accord represents a compromise by both sides. He added that the establishment of the high-level commission indicates “how seriously [the United States is] addressing” the South Korean concerns.

The new agreement replaces one that was due to expire last year but was extended for two years. Officials from the two countries initialed the new pact in April. (See ACT, May 2015.)

The June 16 submittal to Congress starts a countdown of 90 days of so-called continuous session. The agreement can enter into force if Congress does not block it during that time. Congress also can vote to add conditions to the agreement.