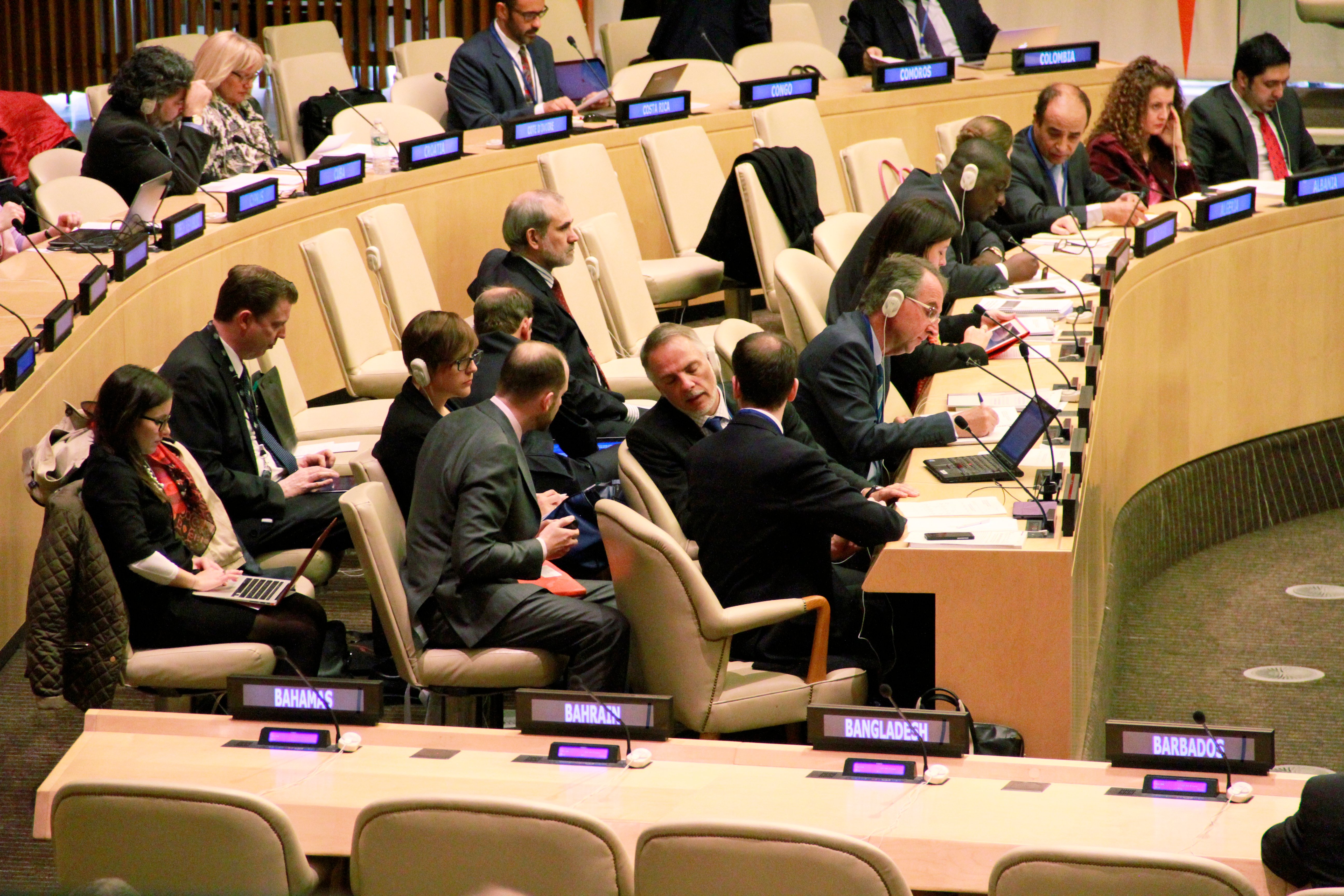 When the United States took the floor[1] to block the draft outcome document at the 2015 Nuclear Nonproliferation Treaty (NPT) Review Conference, no one in the room seemed particularly surprised or even disappointed. After four weeks of discussions, even the adoption of a final outcome document would not have masked the wide differences in approaches to nuclear weapons that the treaty’s states-parties have.

As long as some states continue to defend possession and argue for the legitimacy of nuclear weapons, the NPT cannot tackle the fundamental problem posed by these weapons, whether or not its review conference can produce an outcome document.

After the debates among nuclear-weapon states, nuclear alliance states, and non-nuclear-weapon states on the consequences and risks of nuclear weapons, it seemed unlikely that any language that could be acceptable to all would actually mean anything. One side clearly believes nuclear weapons are legitimate tools for enhancing national security while the other believes they are unacceptable weapons that should be banned. As 49 states described it at the closing of the review conference, “[T]here is a wide divide that presents itself in many fundamental aspects of what nuclear disarmament should mean. There is a reality gap, a credibility gap, a confidence gap and a moral gap.”[2]

Although Canada, the United Kingdom, and the United States blocked consensus on a final draft over the proposed language on the planned conference on ridding the Middle East of weapons of mass destruction, the draft outcome document was deeply flawed on disarmament. It contained no meaningful new commitments or benchmarks and in some ways rolled back previous commitments. Moreover, many states-parties were excluded from the final negotiations.

At the closing plenary, a wide range of governments from all regions highlighted the ways that the text fell dramatically short of making credible progress.

The failure to agree on an outcome document, coupled with the lack of implementation of the “action plan” that was a key part of the agreed outcome from the 2010 review conference, has seriously undermined the belief that the NPT can be a credible path toward disarmament. Throughout the four weeks, it was made clear that the nuclear-weapon states are not interested in making any new commitments to disarmament.

Although it might be tempting to repeat the phrase “the NPT is in danger,” the developments throughout the four weeks of the recent review conference showed that states are still committed to the NPT. Most governments see the NPT as a key treaty preventing the spread of nuclear weapons and containing the only current, legally binding commitment to nuclear disarmament by the nuclear-weapon states. So, although a failure to achieve a consensus document does not in itself threaten the NPT, it might reduce the faith many governments, international organizations, and civil society organizations have in the treaty’s review process as an effective way of making progress on nuclear disarmament. It is time to pursue the objectives of the NPT in other settings.

The real outcome of an NPT review cycle is not limited to a final document. As this 2015 review conference concluded, the “Humanitarian Pledge,”[3]—initiated by Austria as an action-oriented outcome of the three conferences in Norway, Mexico, and Austria on the humanitarian impact of nuclear weapons use—had been endorsed by 107 states.[4] The chair’s summary from the December 2014 conference in Vienna noted that “there is no comprehensive legal norm universally prohibiting possession, transfer, production and use of nuclear weapons.”[5] By endorsing the Humanitarian Pledge, the majority of states-parties to the NPT have committed to “pursue effective measures to fill the legal gap for the prohibition and elimination of nuclear weapons.”[6]

This is a significant achievement and shows a surge of interest in looking at a new, legally binding instrument to address the concerns raised through the humanitarian initiative.

No consensus outcome document would have been able to reflect the growing interest in the humanitarian perspective on nuclear weapons use and the strong appetite for turning these concerns into concrete action. This will be the case as long as the nuclear-weapon states and many of their allies insist that nuclear weapons have security benefits (for them) and that they have a right to use such weapons to defend their national security (under circumstances they will not define).

It is often said that the humanitarian initiative grew out of non-nuclear-weapon states’ frustration with the slow pace of disarmament. Yet, it is not just a way for these states to express frustration; it is the expression of the aspirations for humanity. “Humanitarian impact” is not a catchy phrase to use in order to create more pressure on nuclear-armed states to pursue disarmament, and the emphasis on that approach to the problem of nuclear weapons is not a “short cut” to disarmament or even an attempt to try something new when other efforts have failed.

Instead, it is a reflection of the emergence of a new era in security policy in which humanitarian concerns and humanitarian law are growing in importance while strategic balance and power politics are seen as increasingly outdated Cold War attitudes. It should be seen as the result of a new way of conducting international relations in which problems with global impacts mean that stakeholders from all regions of the world, not just the permanent members of the UN Security Council, have the right to have a say about the solutions.

The discussion about humanitarian impact is about the weapons themselves and what they do to people. The effects of just a single nuclear weapon are shocking and overwhelming, and they go far beyond what is acceptable.

The use of a nuclear weapon on a major populated area would immediately kill tens if not hundreds of thousands of people, with hundreds of thousands injured. The long-term consequences would significantly harm the environment, development, and the economy across borders and generations.[7]

Nuclear weapons fundamentally violate the principles of humanitarian law. They are morally intolerable and illegitimate instruments of terror, and as the International Committee of the Red Cross stated, “[T]heir destructive power is unrivalled, their potential impact catastrophic, and yet they remain the one weapon of mass destruction not yet banned.”[8]

The failure of the 2015 NPT Review Conference will not affect the treaty’s ability to do what it is intended to do—prevent the spread of nuclear weapons and provide a legal obligation for negotiating nuclear disarmament. Together with International Atomic Energy Agency safeguards, the NPT will remain a key tool for the international community to prevent new states from acquiring nuclear weapons. 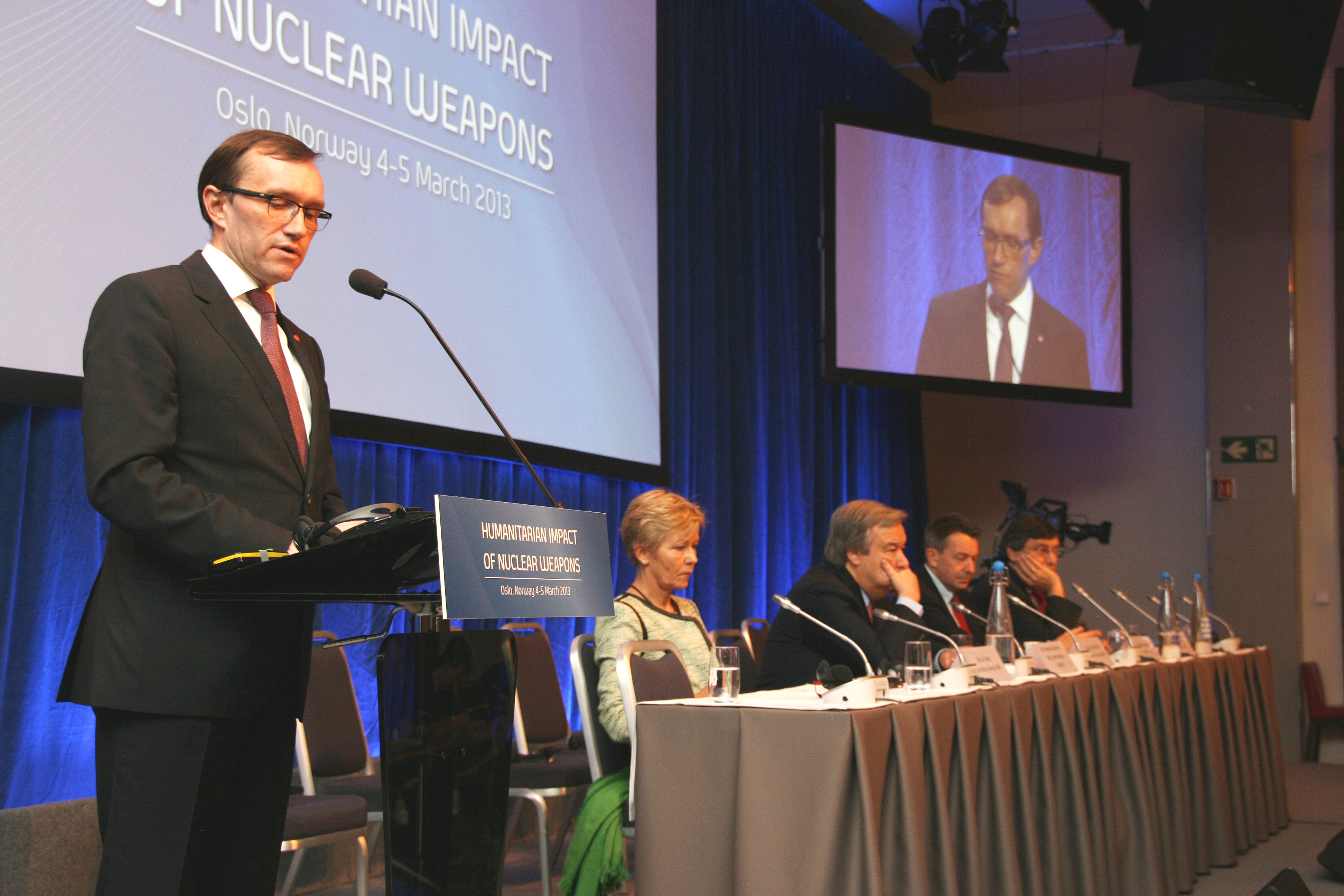 Pursuing the Humanitarian Pledge and prohibiting nuclear weapons may not make it easier at the next NPT review conference to achieve consensus on the question of whether nuclear weapons are legitimate tools for security, but it can catalyze action on the necessary elements to eliminate nuclear weapons. A ban on nuclear weapons could be developed and adopted through a series of negotiating conferences initiated by non-nuclear-weapon states and should be pursued in the coming years even if the nuclear-armed states choose not to participate. Such a treaty would likely entail the development of an international prohibition on the use, development, production, stockpiling, transfer, acquisition, deployment, and financing of nuclear weapons, as well as prohibiting assistance with these acts.

Progress on addressing the humanitarian concerns and the continued risk of existing nuclear arsenals is desperately needed. Despite efforts from some nuclear-weapon states to brush aside the facts presented at the three conferences on the humanitarian impact of nuclear weapons use,[9] it is evident that the risk of use continues to exist and that the catastrophic humanitarian consequences of a nuclear detonation would make it difficult to provide any meaningful assistance or relief.

As it is now 70 years since nuclear weapons inflicted unspeakable suffering on the people of Hiroshima and Nagasaki, it is essential that governments take this opportunity and start a process to prohibit nuclear weapons.

A treaty banning nuclear weapons should not be negotiated because of the NPT and its failure to agree on an outcome document. It should be negotiated because, in today’s international context, weapons with indiscriminate, inhumane, and unacceptable effects that harm civilians, communities, and the environment should be prohibited.

Although a ban on nuclear weapons is not automatically going to result in their elimination, it is a necessary catalyst for disarmament. The dismantlement of all nuclear arsenals might be a long process, but a clear international rejection of these weapons is going to be an essential component of future disarmament efforts. By contributing to international stigmatization and rejection of these weapons, a ban on nuclear weapons and the process to negotiate it will make the maintenance and development of nuclear weapons less attractive and more difficult for existing nuclear weapons possessors and potential new ones even if such states do not participate in the negotiations. In addition, the process to develop a treaty banning nuclear weapons could transform civil society engagement in this area and provide unprecedented opportunities for political pressure.

No longer should it matter who has the weapon or for what reason. Inhumane practices such as torture, slavery, and threatening cities and communities with nuclear attack simply cannot be allowed to remain legal.

With the Humanitarian Pledge as a basis, it is time for those countries willing to move forward to get together and start a process to fill the legal gap through negotiations of a new legally binding instrument to prohibit nuclear weapons. Throughout the 2015 NPT Review Conference, the increasing support for the pledge highlighted that a powerful momentum has been created throughout the review cycle. It is therefore time for a state or a group of states committed to this initiative to take the lead by initiating a process to outlaw nuclear weapons immediately. Negotiations of such a treaty could take place in any forum, but would need to be open to all states, blockable by none, and inclusive of civil society and international organizations.

Beatrice Fihn is executive director of the International Campaign to Abolish Nuclear Weapons and leads the campaign for a treaty banning nuclear weapons. She previously worked on disarmament issues for Reaching Critical Will of the Women’s International League for Peace and Freedom and the Geneva Centre for Security Policy.

4. For a list of states endorsing the Humanitarian Pledge, see http://www.icanw.org/pledge.

5. Republic of Austria, “Report and Summary of Findings of the Conference,” Vienna Conference on the Humanitarian Impact of Nuclear Weapons, December 8-9, 2014, http://www.bmeia.gv.at/fileadmin/user_upload/Zentrale/Aussenpolitik/Abruestung/HINW14/HINW14_Chair_s_Summary.pdf.