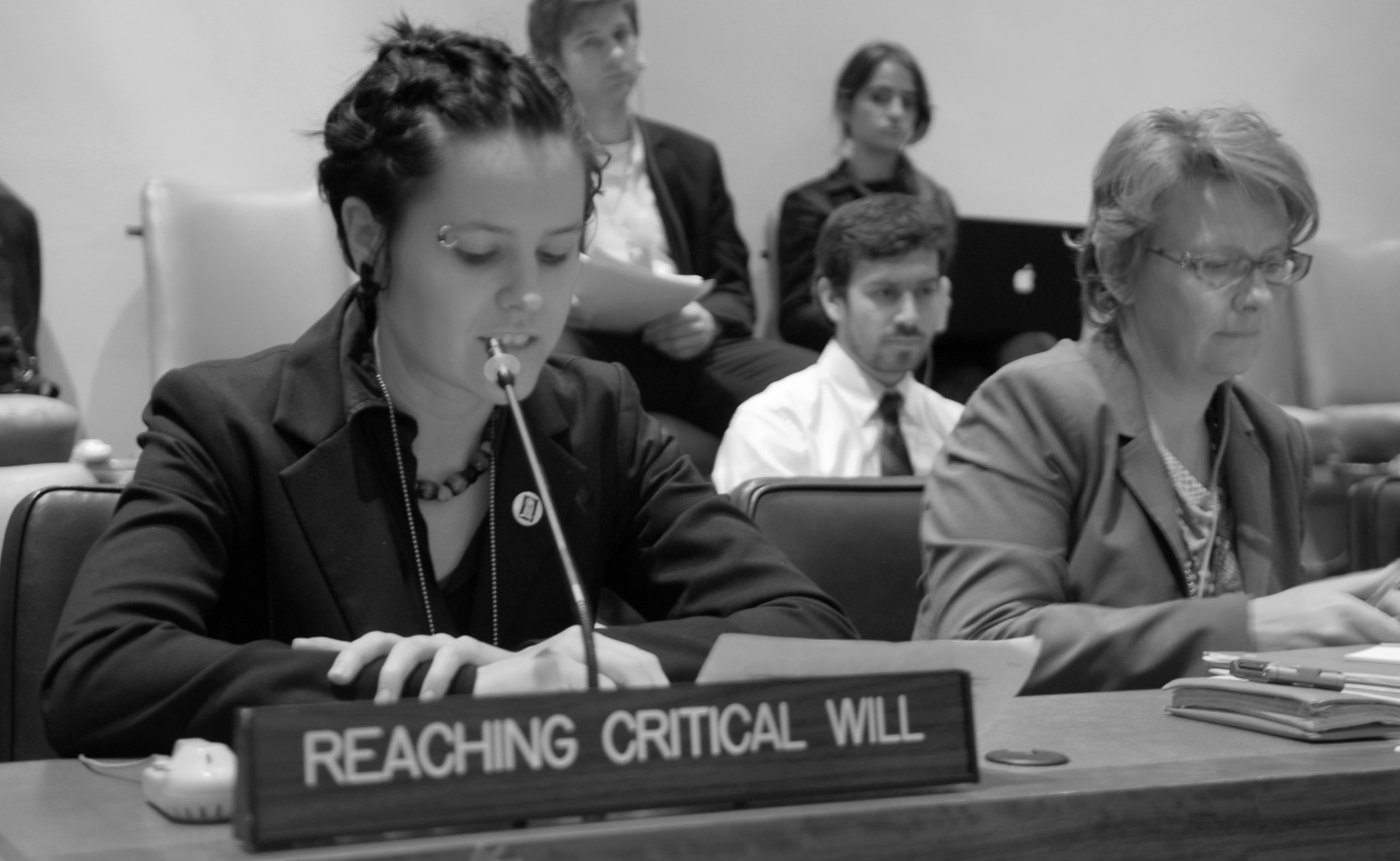 With her black nail polish and eyebrow ring, Ray Acheson does not fit the stereotype of a veteran arms controller. As director of the Reaching Critical Will (RCW) project of the Women’s International League for Peace and Freedom (WILPF), she has spent a decade doing disarmament work in the UN system.

Arms Control Today caught up with her in the crowded offices of RCW in New York City. The interview, conducted by Jefferson Morley, has been edited for length and clarity.

Forgive me if it’s tiresome, but I have to ask: Any relation to Dean [Acheson, the U.S. secretary of state from 1949 to 1953]?
No, no relation. I do get the question all the time, though.

I guess the question really is, do you have arms control in your family DNA?
Not at all, no. I was born in Toronto, went to school at the University of Toronto. My father manages a box factory in Canada.

When did you know you would make a livelihood out of arms control work?
There wasn’t any one single event. When I was in high school, I read anything I could get my hands on, lots of political theory, lots of [Noam] Chomsky. When it was time to choose what I was going to do at university, I picked peace and conflict studies because I thought that was a way to keep engaging the readings that I was really interested in.

My very first internship was with Randy Forsberg. I was exposed to the anti-nuclear movement through her, through her stories of what she was doing in the 80s.

The RCW website talks about the evolution from the women’s perspective of WILPF in 1915 to a gender analysis perspective of 2015. What is the meaning of that evolution?
Arms control really isn’t an issue to do with biology as much as socialized norms and constructions and roles and that sort of thing. We’ve actually written a paper on this: It’s my favorite title for any paper I’ve written: “Sex and Drone Strikes.” It’s looking exactly at this construct—for example, using males of a certain age to equal “militant” or a “combatant.” From a gender analysis perspective, this really reinforces the concept of violent masculinities, that if you are a man, you’re a militant. “Innocent civilians” has come to mean women and children and the elderly. The whole concept has excluded men, so it makes men more expendable.

What are you most proud of that RCW has done?
We led WILPF’s advocacy on the Arms Trade Treaty. We managed to secure a legally binding provision on gender-based violence. At the beginning, we were getting questions like, “What does gender-based violence have to do with the arms trade? I don’t get the connection.” By the end, we had a hundred states saying that it had to be in the treaty and it had to be legally binding.

The world still faces the reality of huge nuclear arsenals. Do you ever just get daunted?
I’m challenged by it to be even more effective. The biggest thing that I am working on now is trying to get states to negotiate a treaty that prohibits nuclear weapons. That has been extremely exciting to work on.

Are you encouraged that we now have mainstream political figures like George Shultz coming out for getting to zero?
It was useful but also distracting because it made people feel that this is going to happen and we don’t have to do anything. That was true with [President Barack] Obama’s Prague speech as well. People felt like yes, the U.S. is going to be a leader on this and then, as you’ve seen, that has not panned out at all. It sort of sucked energy away.

What creates energy in your work and your organization?
For me, I guess it’s a sense of injustice. Nine countries have nuclear arms and threaten the rest of us every single day. I think we can do something. The alternative is saying it’s all too big, it’s all too complicated, so we might as well not even try. You might as well try. Life is in trying.