“[My time at ACA] prepared me very well for the position that I took following that with the State Department, where I then implemented and helped to implement many of the policies that we tried to promote.”
– Peter Crail
Business Executive for National Security
June 2, 2022
Greg Thielmann 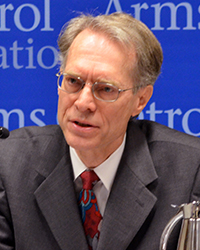 Greg Thielmann has served more than three decades in the executive and legislative branches of government, specializing in political-military and intelligence issues. Greg served on the board of the Arms Control Association from 2003 to 2005. He joined the staff as a Senior Fellow in 2009, providing research on threat assessments, nuclear missile proliferation, and U.S.-Russian strategic arms control. He rejoined the board in 2016.

He previously worked for four years as a senior professional staffer of the Senate Select Committee on Intelligence (SSCI) and was a U.S. Foreign Service Officer for 25 years, last serving as Director of the Strategic, Proliferation and Military Affairs Office in the Department of State’s Bureau of Intelligence and Research. His foreign posts include Deputy Political Counselor of the U.S. Embassy in Brasilia, Brazil; Political-Military Affairs Officer in Moscow, USSR; and Political-Military Affairs Officer in Bonn, Germany. Thielmann also served as Deputy Director of the State Department’s Office of German, Austrian and Swiss Affairs; Special Assistant to Ambassador Paul Nitze (then Special Adviser to the President and Secretary of State on Arms Control Matters); and State Department advisor to the U.S. Delegation at the Geneva INF arms control negotiations.

His July 2003 appearance at an ACA press briefing on faulty intelligence assessments on Iraq’s WMD capabilities led to a CBS News 60 Minutes II segment “The Man Who Knew,” which won an Emmy Award for reporter Scott Pelley.