Defying pressure from the major nuclear-armed powers, UN member states set the stage for negotiations next year on a treaty to prohibit nuclear weapons.

The UN General Assembly First Committee, which deals with nuclear disarmament issues, on Oct. 27 adopted overwhelmingly a landmark resolution “to convene in 2017 a United Nations conference to negotiate a legally binding instrument to prohibit nuclear weapons, leading towards their total elimination.” 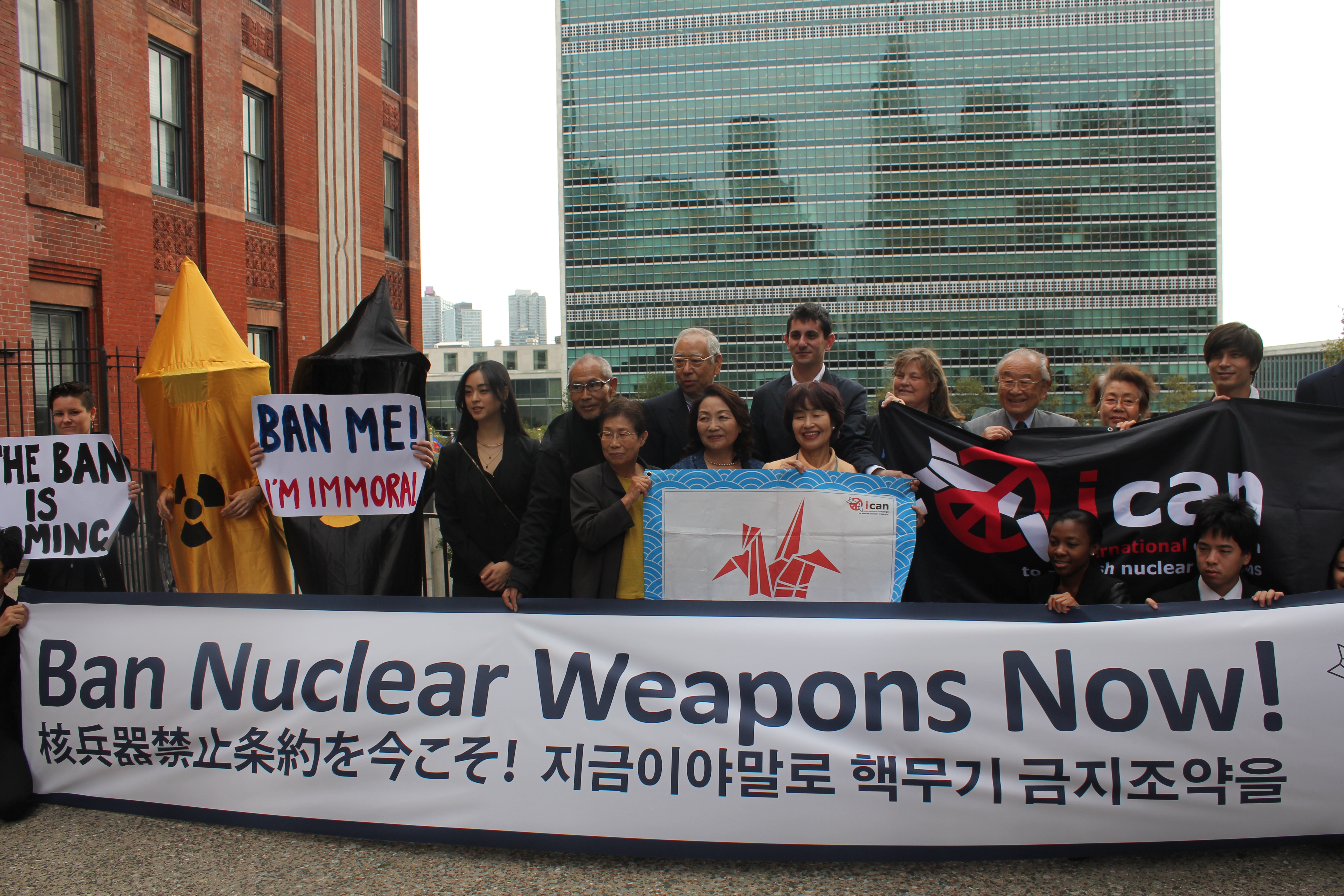 The vote was 123-38, with 16 abstentions, on the resolution put forward by Mexico, Austria, Brazil, Ireland, Nigeria, and South Africa. The full General Assembly is expected to approve the measure by year-end.

The resolution passed despite aggressive lobbying by nuclear-armed powers France, Russia, the United Kingdom, and the United States, which have said they will not participate in such treaty negotiations. As a group, however, the world’s nine nuclear-armed nations were divided on the resolution.

The resolution calls for a one-day organizational meeting to be held in New York “as soon as possible” followed by two negotiating sessions in 2017 on March 27-31 and from June 15 to July 7.

Advocates said the ban treaty would be an interim step, leaving the issue of eliminating nuclear weapons for subsequent negotiations. Antonio de Aguiar Patriota, Brazil’s permanent representative to the UN, said in an Oct. 17 statement that the treaty would be “part of a gradual process, which begins by setting out core prohibitions to be followed by elimination and verification arrangements.”

A majority of the nuclear-armed states voted against the resolution and cited risks of commencing negotiations on a ban treaty.

In an Oct. 27 statement on behalf of France, the UK, and the United States, Alice Guitton, the French permanent representative to the Conference on Disarmament, said that although the commitment of the three countries to a world without nuclear weapons remained “unshakeable,” a treaty prohibiting nuclear weapons would not move toward that goal and instead would “distract attention” from more practical and verifiable disarmament steps.

Russian Foreign Ministry official Vladimir Yermakov went much further, arguing that the hasty adoption of a legally binding prohibition would be “destructive,” “catastrophic,” “treacherous,” and “thrust the world into chaos and instability.”

In an unexpected move, China broke ranks with the rest of the five permanent members of the UN Security Council and abstained.

The other nuclear-armed states took varied positions. India and Pakistan abstained, North Korea voted yes, and Israel, which does not officially acknowledge having nuclear weapons, voted no.

The resolution was opposed by nearly every U.S. treaty ally in Europe and Asia, often labeled “umbrella states” because they rely on the U.S. nuclear arsenal to help protect them.

The sole exception was the Nether-lands, which abstained. Dutch Foreign Minister Bert Koenders said that the Netherlands “sincerely supports a ban on nuclear weapons” but that there were problems with the resolution, according to Dutch broadcaster NOS. The lower house of the Dutch parliament had pressed the government to support the resolution.

Sweden, which is not a member of NATO but has increased cooperation with the alliance in recent years due to concerns about Russian behavior, voted for the resolution.

In an Oct. 17 nonpaper obtained by Arms Control Today, the U.S. mission to NATO urged alliance members and partners “to vote against negotiations on a nuclear weapons…ban, not to merely abstain.” The nonpaper warned that “efforts to negotiate an immediate ban on nuclear weapons or to delegitimize nuclear deterrence are fundamentally at odds with NATO’s basic policies on deterrence and our shared security interest.”

The First Committee vote followed on the heels of an open-ended working group that met in Geneva this year, in which a majority of participating states expressed support for starting negotiations on a “legally-binding instrument to prohibit nuclear weapons.” None of the nuclear-armed countries attended the sessions. (See ACT, September 2016.)

The working group’s final report said a new instrument “would establish general prohibitions and obligations,” which could include a number of elements, such as “prohibitions on the acquisition, possession, stockpiling, development, testing and production of nuclear weapons.”