In the coming weeks, it is likely that the Trump administration will formally propose new U.S. firearms export rules designed to increase foreign sales but that also make it easier for terrorists and international criminals to obtain lethal weapons. The proposal could also effectively undercut the important oversight role that Congress provides.

With the Trump administration showing far less restraint regarding the transfer of sophisticated U.S. weaponry, it is essential that the Congress carefully review the new firearms export policy approach and use what levers it has to ward off changes to longstanding policies that have served U.S. national security interests in the past. 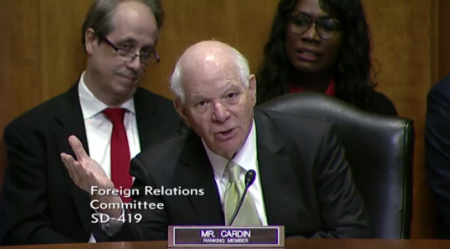 Early in his administration, President Obama launched the Export Control Reform Initiative, based on a review that found the United States was “trying to control too much.” Indicating that it sought to “strengthen the United States’ ability to counter threats such as the proliferation of weapons of mass destruction,” the administration proposed and/or enacted changes to 18 of the 21 categories of major weapons and technology controlled under the United States Munitions List (USML), moving many items to the Commerce Control List (CCL).

A thrust of the effort was described as “building higher fences around fewer items” and those fewer items were ones that tended to be high-tech and give the U.S. a unique military advantage. Left undone were the first three categories: firearms, close assault weapons and combat shotguns (category I), guns and armaments (II); and their ammunition/ordnance (III).

The Trump administration is now moving to address arms transfers in these three remaining categories. The Defense Trade Advisory Group, a committee of private sector defense exporters and defense trade specialists that advises the State Department, discussed possible revisions Sept. 8. It is expected that proposed changes will be made public later this month, with an expedited 60-day public review period.

At the core of export reform push is the mistaken belief that small arms and light weapons do not merit the tighter controls of the USML because they are neither high-tech nor provide unique military advantages. In reality, however, many of the weapons in categories I-III are the ones most frequently used in violent conflict, in perpetuating human rights abuses, and that can most easily fall into hands of those who seek to undermine U.S. national security.

Recognizing this, in 2002 Congress amended its notification threshold so that it would be informed of potential commercial sales of firearms under USML category I when they were valued at just $1 million, as opposed to $14 million for other major weapons sales. During that notification period, as well as during informal prenotifications, Congress can seek to block or delay sales. During a Sept. 26 Senate Foreign Relations Committee hearing, ranking member Benjamin Cardin (D-Md.) pointed to forestalling small arms sales to Turkey and the Philippines as recent examples of Congress’ needed role.

No similar statutory requirement of congressional notification exists for most arms sales under the CCL. According to the Security Assistance Monitor, $556 million in firearms notifications have already gone to Congress through July this year

In a cautionary Sept. 15 joint letter to Secretary of State Rex Tillerson, Senators Cardin, Dianne Feinstein (D-Calif.), and Patrick Leahy (D-Vt.) wrote that: “Moving such firearms from the USML to the CCL would be directly contrary to congressional intent … effectively eliminating congressional oversight of exports of these weapons.”

However, due to the less restrictive nature of the rules surrounding the CCL, the dangers go beyond a lack of Congressional oversight. A number of license exemptions available on Commerce-controlled items may enable illegal procurement and diversion of reclassified weapons, a risk that concerned many current and former enforcement officials interviewed for a recent Institute for Science and International Security report. Different or missing brokering registration and agreement approval requirements, as well as confusion over regulations, may also make it harder to identify and prosecute arms smugglers and illegal exporters. The State Department also has the proper mandate to take into account the impact of firearms transfers on terrorist activity, human rights norms and other considerations beyond commercial interests. Lessening State's role would pose significant risks to longstanding U.S. efforts to advance the support of the rule of law and human rights around the globe.

Given the uncertainty around the impacts of any proposed reclassifications, Congress would be wise to ask the GAO to conduct an assessment of the export control reform initiative to this point and independently identify any risks of transferring items on categories I-III to Commerce control. Leaders should ask the Trump administration to wait until those findings come in so that they can be taken into account in any plans to change current implementation.

Concerned members of Congress should also make their opposition known. If rules are indeed notified this month, they should analyze those closely and weigh in during the comment period. They must also rise above the loud voices that will seek to tie this issue to the Second Amendment. These rules are strictly about the international transfer of firearms, not in any way related to domestic possession.

While the administration can proceed with changes to the USML and CCL without Congressional approval, legislators can also pass laws. If needed, for example, Congress could mandate that their oversight role be retained on any weapons moved from the USML to CCL.

In the end, these are the weapons most responsible for so much suffering in the world and ones that could easily be found aimed at U.S. forces. It is irresponsible to lessen control of their export for simple commercial gain or because they are not America’s most sophisticated weapons. As Senators Cardin, Feinstein and Leahy reminded, “combat firearms and ammunition are uniquely lethal; they are easily spread and easily modified, and are the primary means of injury, death, and destruction in civil and military conflicts throughout the world. As such, they should be subject to more – not less – rigorous export control and oversight.”—JEFF ABRAMSON, nonresident senior fellow