In March, the Obama administration announced it would delay key elements of its "3+2" plan to rebuild the U.S. stockpile of nuclear warheads amidst growing concern about the program's high cost and its technically ambitious approach.

Now, the administration and Congress should use this opportunity to reevaluate the program and shift to a more straightforward and affordable path for maintaining the U.S. nuclear stockpile.

Announced last summer by the National Nuclear Security Administration (NNSA), the 3+2 strategy has a sticker price of $60 billion and calls for extending the service life of five nuclear warhead types, three of which would be "interoperable" on land-based and sea-based ballistic missiles. Two other warhead types would be used on bombers, and two types would be retired. (See Table)

Congress, on a bipartisan basis, has been skeptical of 3+2 from the start, particularly the proposal for interoperable warheads. The Senate Appropriations Committee wrote last year that the concept "may be unnecessarily complex and expensive, increase uncertainty about certification" and "fail to address aging issues in a timely manner."

In response to congressional concerns, the NNSA budget request for fiscal 2015 delays funding for much of the 3+2 program, putting the future of the plan in doubt.

It is time to rethink the 3+2 plan. It is too expensive to survive in the current budget climate, takes unnecessary risks with warhead reliability, and has no clear military requirement. It is a solution in search of a problem.

The good news is that we don't need 3+2. The current warhead life extension program (LEP) is successfully refurbishing warheads, and there is no need to adopt a more risky and exorbitantly expensive approach. NNSA can and should stick with the traditional path to warhead maintenance, and save tens of billions of dollars.

No Rush to Refurbish

For fiscal year 2015 and beyond, the administration has delayed key parts of the 3+2 plan. Near-term efforts remain on track, but future projects have been significantly slowed.

For the next ten years, the ongoing life extension for the Navy's W76 submarine-launched ballistic missile (SLBM) warhead is on schedule for completion in 2019, and the B61-12 gravity bomb would be produced from 2020 to 2024, a slight delay.

However, the next warheads in the 3+2 queue have been significantly delayed. A rebuilt warhead for a new cruise missile for the Air Force's proposed long-range bomber has been pushed back by up to three years, from 2024 to 2027. The first interoperable warhead, called the IW-1, has been moved from 2025 to 2030. These delays mean that key development decisions have been pushed into the next administration, increasing uncertainty about whether these programs will continue.

These delays will not put the reliability of the stockpile at risk. NNSA Deputy Administrator for Defense Programs Donald Cook testified before the House Appropriations Energy and Water Development Subcommittee on April 3 that the two warhead types IW-1 would replace, the W78 intercontinental ballistic missile (ICBM) warhead and the W88 SLBM warhead, "are aging as predicted." NNSA budget documents also state that the W78 warhead, the older of the two, is "aging gracefully."

Much of the congressional concern about the 3+2 plan stems from NNSA's proposal to develop interoperable warheads to be used on both ICBMs and SLBMs, which has not been done before and would be prohibitively expensive.

The "Hedge." NNSA's primary rationale for the 3+2 approach is that it would eventually help reduce the number of non-deployed warheads that are stored as a "hedge" in case there is a catastrophic failure with one or more warhead types. Recent NNSA budget documents state that, "Three interoperable ballistic missile warheads with similar deployed numbers will allow for a greatly reduced technical hedge for each system to protect against a single warhead failure."

Reducing the hedge is a worthwhile goal, but we don't need the 3+2 plan to get there.

First, the probability of a technical surprise that would disable an entire class of warheads is exceedingly remote. The NNSA's stockpile surveillance and stewardship programs are designed to prevent such surprises.

Second, the United States maintains--at great expense--a "triad" of delivery platforms, which allows for an inherent hedge. In the highly unlikely event that any one leg of the triad becomes inoperable or unreliable, the other two legs are there.

Third, given that the 3+2 plan would not be completed for 30 years or more, potential reductions to the hedge stockpile are highly uncertain and would be far in the future if they happen at all. There is no guarantee that promised hedge reductions would ever materialize as a direct result of the 3+2 plan.

To get around this problem, NNSA is proposing to use parts from two different, existing warheads: a primary from the W87 ICBM warhead, which already has insensitive explosives, and possibly a secondary from the W80 cruise missile warhead.[2] But those parts have never been used together, and such combinations have never been introduced into the nuclear stockpile without nuclear tests, which the United States no longer conducts.

Thus, the IW-1, with a projected price tag of $11 billion, could introduce unwelcome concerns about reliability into an otherwise well-tested and reliable stockpile.

What would be achieved for the added risk and cost? Not much.

The IW-1 would replace the W78 ICBM warhead and the W88 SLBM warhead, neither of which has insensitive explosives. But other warheads on the Air Force's ICBMs and bombers do have insensitive explosives, so this is really a Navy issue. However, the Navy is questioning whether the high cost of insensitive explosives is worth the limited benefit for its warheads, which spend most of their time protected inside missiles, inside submarines, under the sea.

In a September 2012 memo to the Nuclear Weapons Council, a joint Defense and Energy Department group that coordinates management of the U.S. nuclear weapons stockpile, the Navy said it does "not support commencing the [IW-1] effort at this time." In response, the council decided in December 2012 to study an option for the Navy's W88 warhead that would not be interoperable.

NNSA plans to upgrade non-nuclear parts of the Navy's W88 warhead anyway, and once that happens, Livermore's Albright noted that the Navy "almost certainly will argue" that replacing the W88 with an interoperable warhead would cost "too much money."

Instead, Albright said the Navy would prefer to simply refurbish the W88, "which is what they did on the W76." The W76 life extension is expected to cost $4 billion, or one-third the price of IW-1.

In turn, doing an independent W88 refurbishment should decrease the Air Force's incentive to refurbish the W78, which could instead be retired and replaced by the W87 as the only ICBM warhead. The Air Force no longer needs two warhead types for ICBMs, and there are enough W87s to go around. IW-1 would thus be unnecessary.

Beyond that, the proposed IW-2 and IW-3 warheads are distant prospects, with no production planned until 2034 or later, at costs of $15 and $20 billion, respectively. 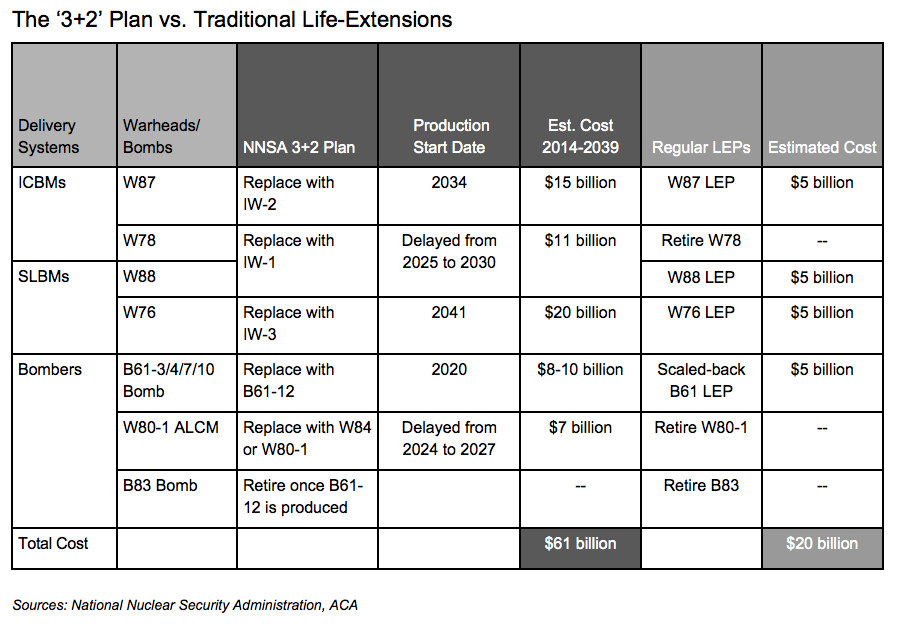 There is a relatively simple alternative to the 3+2 plan. Instead of developing unproven interoperable warheads by mixing and matching parts from different weapons, NNSA could do things the time-tested way. The Navy's $4 billion W76 SLBM warhead life extension program (LEP) does not introduce any new fancy bells and whistles. This should be the model for future life extensions. But first, the Pentagon should reassess the need for warhead types before they are refurbished.

Step 1: Retire Where Possible. For starters, there is no need to rebuild the W78 or W80 warheads, and both should be retired. Twenty years after the end of the Cold War, we can no longer remain on autopilot, replacing nuclear systems just because we had them before. Each replacement system must have its mission justified as if it were new.

For the W78, a smaller ICBM force means there is no need keep two different ICBM warheads. The W87, also used on ICBMs, is newer and has all modern safety features. In the unlikely event of a problem with all W87 warheads, the United States would still have the submarine and bomber legs of the triad to deter any potential attacks. Enough W87 warheads have been produced (more than 500) to arm the entire ICBM fleet. Retiring the W78 would allow the IW-1 project to be cancelled, saving $11 billion.

As for the W80, there is no need for a new air-launched cruise missile (ALCM), and thus no need to rebuild this warhead. Despite the House defense bill's call to accelerate this warhead program by one year to 2025, the United States no longer needs a bomber with stand off nuclear missiles that are shot from afar, like the ALCM. The new Air Force bomber will be designed to penetrate enemy air defenses, so it needs bombs that can be dropped from above, like the B61. Moreover, the United States has other standoff weapons if needed, such as submarine-launched ballistic missiles. Cancelling the ALCM would save $7 billion for the warhead and another $10 billion or so for the missile.

Step 2: Keep it Simple. The remaining warheads would undergo traditional life extensions as needed. Future LEPs should not introduce technical, schedule and cost risks inherent to interoperable warheads, which are just asking for trouble.

Nor should NNSA conduct the $8-10 billion B61-12 LEP as planned. Consolidating four bomb-types into one is overly complex and expensive. NNSA should scale back this program by refurbishing the strategic B61-7, and separately refurbish or retire the tactical bombs, which could save up to $5 billion.

Assuming an average cost of $5 billion per LEP, based on the cost of the W76 LEP plus inflation, refurbishing this four warhead-type stockpile under this approach would cost roughly $20 billion over 30 years or more, or one-third the cost of NNSA's $60 billion plan.

In addition, by taking a more straightforward approach to LEPs, NNSA could reuse existing plutonium parts, know as "pits," rather than producing new ones, and delay the need to spend billions to expand the U.S. pit production capacity. The House defense bill calls for accelerating pit production, but this would be expensive and unnecessary.

The NNSA's 3+2 program does not add up. The United States can maintain its nuclear warheads through traditional life extensions without resorting to expensive, risky schemes. NNSA needs to rethink the program and come back to Congress with a proposal better suited to today's fiscal and political realities.--TOM Z. COLLINA

1. Insensitive high explosives help to reduce the risk of plutonium dispersal. The risk of an accidental nuclear explosion is already very low.
2. The W87 warhead is too big to fit on the Trident II D5 SLBM, so only the primary would be used.