The United States plans to spend at least $355 billion to maintain and rebuild its nuclear arsenal over the next decade, according to a new report by the nonpartisan Congressional Budget Office (CBO). Over the next 30 years, the bill could add up to $1 trillion, according to another independent estimate. 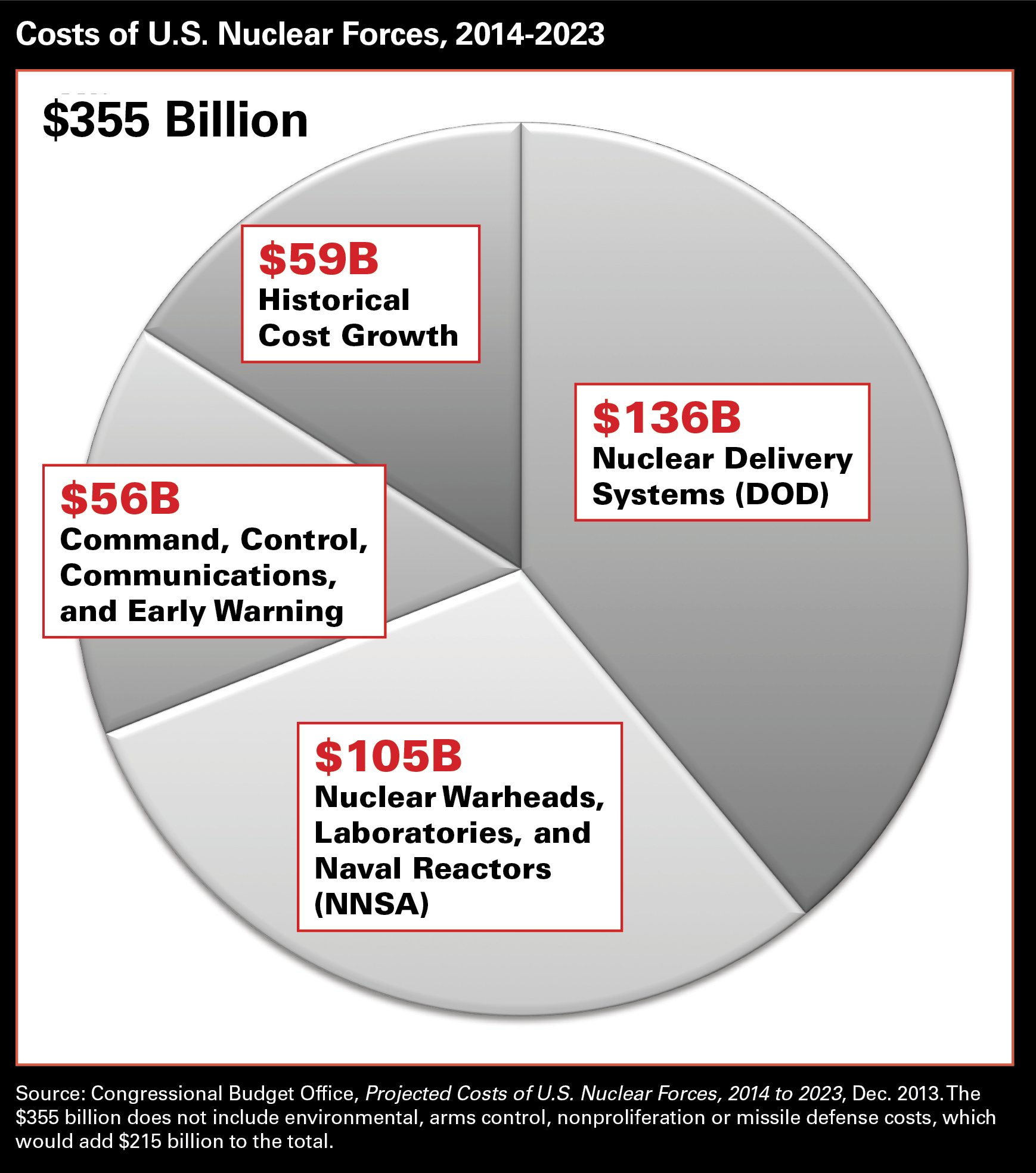 These eye-popping projections come at a time that the defense budget is declining along with the role of nuclear weapons in U.S. defense strategy. The Pentagon announced last June that it could reduce strategic nuclear forces by one-third below levels set by the 2010 New START Treaty, continuing a historical trend. The U.S. nuclear stockpile has dropped by 80 percent since its peak in 1967, but is still a formidable force of about 4,600 warheads.

These high costs, combined with shrinking budgets and stockpiles, should compel the Pentagon to rethink its plans to rebuild U.S. nuclear forces in the years ahead.

Now is the Time to Trim
The Departments of Defense and Energy are in the process of making long-term, multi-billion dollar decisions about how many new missiles, submarines, bombers and nuclear warheads the nation will build and deploy over the next 50 years. Now is the time to reevaluate these plans, before major budget decisions are locked in.

The good news is that it's not too late to chart a different course. Major acquisition programs are just getting off the ground and can be scaled back.

CBO estimates that, under current plans, U.S. taxpayers will spend at least $89 billion to buy new nuclear replacement systems over the next decade. But since these are long-term commitments that are just starting, CBO points out that costs are likely to balloon after 2023 as production begins. From 2024 to 2030, CBO estimates, the cost of modernization would be more than four times higher than in 2014.

The largest share of funding for nuclear delivery systems would go to strategic submarines. The Navy wants to buy 12 new ballistic missile submarines with a total production cost of about $100 billion. The Air Force is seeking up to 100 new, nuclear-armed strategic bombers that would cost at least $55 billion, as well as a new fleet of land-based intercontinental ballistic missiles and air-launched cruise missiles. The Energy Department's National Nuclear Security Administration (NNSA) is pursuing a $60 billion plan to upgrade five nuclear warhead types, including the B61 gravity bomb.

Arms Reductions Create Opportunity
Fortunately, ongoing U.S. and Russian nuclear arsenal reductions under New START open the door to major budget savings at this pivotal time. There is no need to wait for another U.S.-Russian arms reduction agreement to save money. 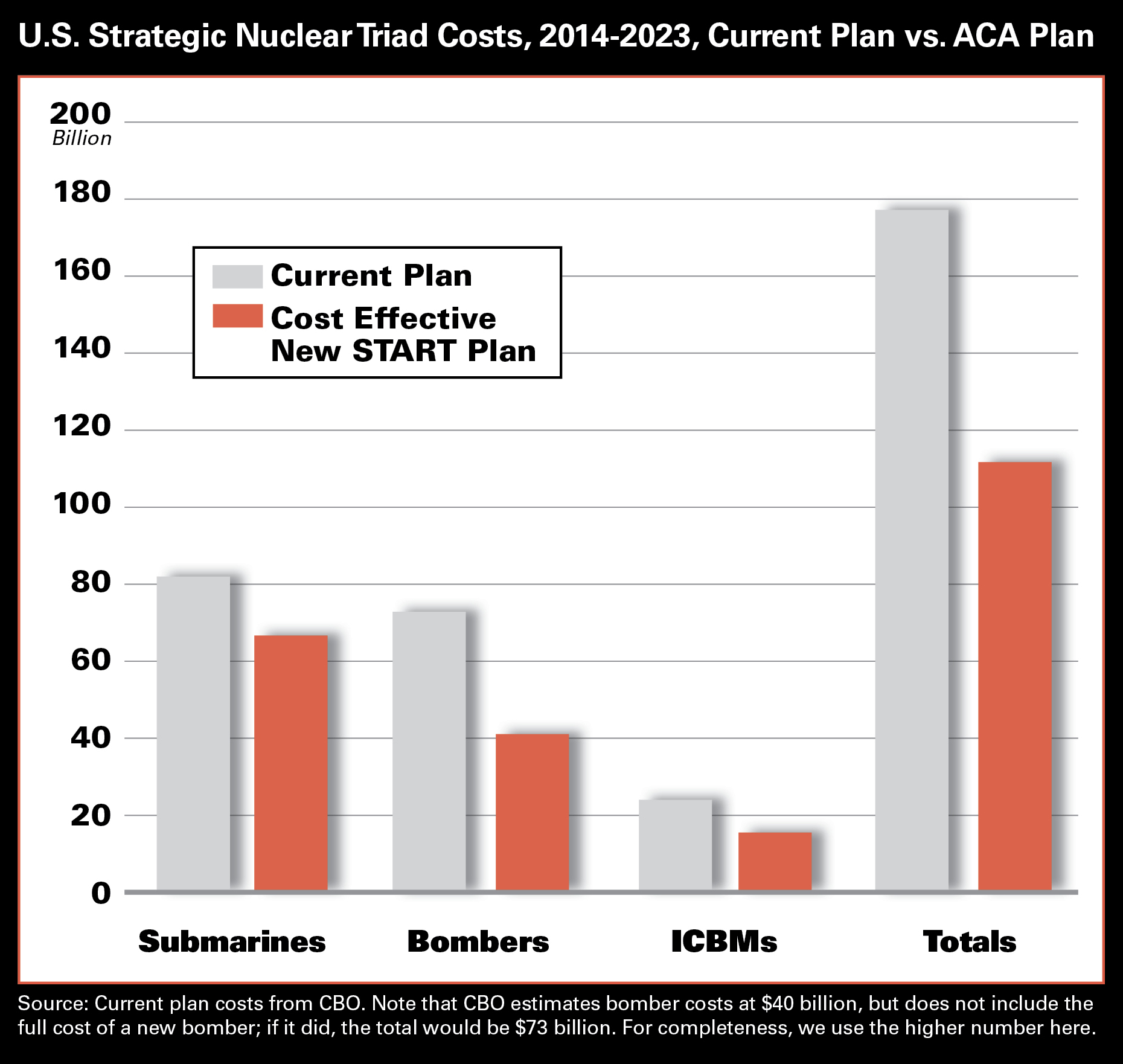 The United States maintains a deployed arsenal of about 2,100 strategic and tactical warheads and associated delivery systems--missiles, submarines, and bombers--and another 2,500 in reserve, for a total active stockpile of approximately 4,600 warheads.

New START will take the United States down to 1,550 treaty-accountable, deployed strategic warheads by 2018; Russia, now at 1,400 warheads, is already well below that level. Other than Russia, the only potential U.S. adversary with a long-range nuclear capability is China, which has no more than 75 single-warhead intercontinental ballistic missiles, according to the Pentagon.

In June 2013, President Obama announced he would pursue a new agreement with Russia to further reduce strategic weapons, as well as to reduce tactical weapons.  The U.S. military leadership has determined it can reduce deployed strategic warheads to 1,000-1,100, or about one-third below New START levels.

This analysis describes realistic, common sense options for reducing U.S. military spending on nuclear weapons that would save U.S. taxpayers about $70 billion from FY 2014-2023 (see chart below). The baseline for this analysis is the CBO estimate of current plans to maintain U.S. nuclear forces, build a new "triad" of delivery systems (submarines, bombers, and missiles), and extend the service life of nuclear warheads.

These options are not dependent on implementing additional U.S. arms reductions beyond New START. Instead, they are designed to meet New START warhead requirements in a more cost-effective way and to delay major procurement decisions until we really need to make them. If the United States does implement additional arsenal reductions in the future (either by treaty or reciprocal reductions), further budget savings would be possible.

STRATEGIC SUBMARINES: 10-year savings, $16 billion
The Ohio-class replacement submarine program is the most expensive piece of the nuclear modernization plan ($100 billion for development and production only; $350 billion total over its lifetime) and, according to the Navy, would force the service to forgo 32 conventional ships it is planning to build, including attack submarines and destroyers. Rather than undermine the Navy's shipbuilding plans, the number of strategic subs can be scaled back.

The current fleet of 14 Ohio class submarines and the planned purchase of 12 new replacement subs (SSBNX) can both be reduced to eight. This would save $15.7 billion over 10 years and would still allow the Pentagon to deploy more than 1,000 warheads on submarines as planned under New START, according to a Nov. 2013 report by CBO. Procurement of the first SSBNX can be delayed until 2024, and its deployment delayed until 2033. Savings include personnel costs, procurement costs from pushing back the SSBNX purchase dates, and operations and management costs from reducing the current Ohio class fleet. During the 2030s, this plan would save an additional $30 billion by avoiding the purchase of four more SSBNX subs, according to CBO.

LONG RANGE BOMBERS: 10 year-savings, $32 billion
Under New START, the Pentagon plans to reduce the nuclear-capable, long-range bomber force from about 96 today to 60 (18 B2s and 42 B52s) by 2018. The B2 and B52 bombers are expected to operate into the 2050s and 2040s, respectively. Production of a new bomber is estimated to cost about $55 billion for 80-100 planes, not including development costs which have been estimated to be at least $20 billion.

The new bomber program can be delayed until the mid 2020s, saving $32.1 billion over 10 years, according to CBO. Even with a 10-year delay, a new bomber would still be ready by about the time current bombers are reaching the end of their service life, according to CBO, and the delay would allow the new bomber to incorporate technological advances made during that time.

AIR-LAUNCHED CRUISE MISSILE (ALCM): 10-year savings, $6 billion
The new Air Force bomber (above) is planned to eventually carry two types of nuclear weapons: a rebuilt gravity bomb (the B61, see below) and a cruise missile, known as the long-range standoff (LSRO) weapon or Air-Launched Cruise Missile (ALCM). The current ALCM, carried by B-52 bombers, was first deployed in the 1980s and is scheduled for retirement in 2030. A new ALCM has not been officially approved and has no official price tag, but is expected to cost at least $1 billion to develop over the next five years and $10-20 billion to produce. In addition, a rebuilt nuclear warhead to go with it would cost another $12 billion, according to NNSA, with about $5 billion to be spent in the next decade.

The need for a bomber with stand off nuclear missiles that are shot from afar is not clear. The new bomber is intended to penetrate enemy air defenses; it needs bombs that can be dropped from above. The current B-2 stealth bomber is a penetrator, too. If the Pentagon is concerned that an adversary's air defenses will improve in the future, the United States has other standoff weapons, such as submarine-launched ballistic missiles.

B61 LIFE EXTENSION PROGRAM (LEP): 10-year savings, $5 billion
A 2012 Pentagon review estimated that the program to refurbish 400 B61 gravity bombs, both strategic and tactical, would cost $10.4 billion or roughly $25 million per bomb. This is an increase of $6 billion over NNSA's original estimate. In 2013 the Senate Appropriations Committee reduced the FY14 NNSA budget for the program by $168 million, or one third, but it was later restored to $537 million in the Omnibus appropriation.

To make the program affordable, NNSA needs to rescope the current plan for the B61 Life Extension Program (LEP) and choose a more cost effective option, such as one that does not replace nuclear components or consolidate four versions of the bomb into one. At the same time, given President Obama's intentions to reduce tactical bombs in NATO, B61 bombs may no longer be deployed in Europe by the time the program is completed a decade from now. A scaled back B61 life extension plan could save an estimated $5 billion.

INTERCONTINENTAL BALLISTIC MISSILES (ICBMS) 10-year savings, $10 billion
Under New START, the Air Force plans to reduce the current Minuteman III ICBM fleet from 450 to 400-420, and can go lower. The ICBM force recently underwent several modernization programs to extend its life expectancy, and the Air Force plans to sustain it through 2030 and possibly through 2075.

Development of a new ICBM and warhead life extension can be delayed until the mid 2020s without affecting operations of the current ICBM fleet. The new ICBM is in an early design phase and there is no official cost estimate. Independent estimates range from $20-$70 billion depending on how many new missiles are built and whether they would be silo-based or mobile. According to CBO, if the Air Force decides to build a replacement ICBM, development costs for the missile and warhead would add up to $10 billion by 2023. Production costs would fall outside the ten-year window.

Needed: Fresh Thinking
It's time for a more sensible approach to U.S. nuclear weapons spending. The savings proposed here can be achieved without reducing the number of deployed U.S. warheads below New START levels, so there is no need to wait for Moscow to reduce its nuclear forces any further. Reductions beyond New START would lead to additional budget savings in the years ahead. 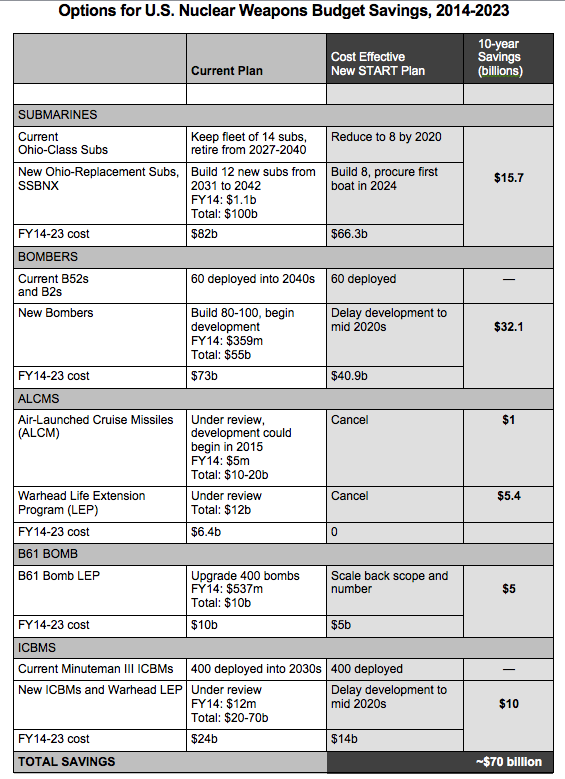