Time to Translate Words Into Action

Daryl G. Kimball, Executive Director, Arms Control Association
Panel on "The Role of Civil Society" at the 20th Anniversary of the CTBT

Distinguished delegates and colleagues the world over. It is an honor to address you at this important meeting on the role and perspectives of NGOs on the path forward on the Comprehensive Test Ban Treaty (CTBT) some 20 years after its entry into force.

Since the beginning of the movement to ban nuclear test explosions, ordinary people, civil society organizations, and individual scientists, doctors, and community leaders have been and will continue to be a driving force in the long journey to end all nuclear testing. 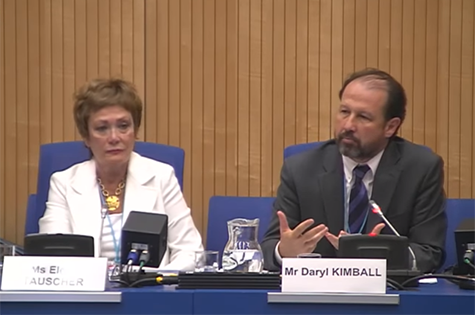 Public pressure for the test ban all over the globe has been driven by the environmental and health impacts of the 2,050 nuclear detonations conducted since 1945, as well as the realization that nuclear testing fuels the development of new and more deadly types of nuclear weapons and dangerous nuclear competition.

Recall that some twenty-five years ago, a popular movement in Soviet-controlled Kazakhstan forced the government in Moscow to halt nuclear weapons testing at proving grounds in their homeland where more than 456 explosions had contaminated the land and damaged the health of its people.

As a result of their efforts and those of other nongovernmental and elected leaders, Soviet President Mikhail Gorbachev declared a test moratorium on October 5, 1991, prompting U.S. activists in Oregon to push their new member of Congress to introduce legislation mandating a 9-month U.S. test moratorium as a reciprocal measure of restraint designed to help put an end to the decades-long U.S.-Soviet nuclear arms race.

With strong nongovernmental support and campaigning, the legislation was approved with a bipartisan majority.

Under pressure from civil society organizations and members of Congress, on July 3, 1993, President Bill Clinton decided to extend the moratorium and to pursue a multilateral nuclear test ban treaty at the Conference on Disarmament. There has not been a U.S. nuclear test explosion since September 23, 1992.

Just four years later, the world’s nations concluded the CTBT to prevent nuclear proliferation and help end the nuclear arms race. Since the opening for signature of the CTBT twenty years ago, the vast majority of the world’s nations have signed and ratified the Treaty. They recognize that nuclear testing is a dangerous and unnecessary vestige of the past and understand that the CTBT is a cornerstone of the international security architecture of the 21 st century.

But the CTBT has become a victim of its own success.

This has had a profound impact for the role of civil society organizations and the future of the CTBT.

Because the CTBT has established an effective global norm against nuclear explosive testing, nuclear testing has come to an end for all but one nuclear-armed state – the DPRK.

As a consequence, and despite the ongoing threat of further North Korean nuclear testing, there is low awareness about the dangers posed by renewed nuclear testing, and the need to achieve entry into force of the CTBT.

In the absence of strong leadership on the CTBT from the U.S. government and the increasingly pro forma statements of support from other states, it has become increasingly difficult to generate the pressure necessary to encourage ratification by the remaining Annex 2 hold-outs.

Unfortunately, the CTBT is not a top objective for most of the civil society organizations working in the nuclear security field and there are increasingly fewer sources of financial support for civil society education and advocacy work on the CTBT.

These are important realities that we need to take into account. These realities pose unique challenges for the governmental leaders who are truly committed to seeing the CTBT enter into force – and for nongovernmental organizations seeking to close the door on nuclear testing in the years ahead.

Business as Usual Will Not Do

Bringing the CTBT into full legal force will require more energetic, more creative, more pragmatic and more focused efforts on the part of us all. As Kazakh Foreign Minister Erlan Idrissov and Japanese Foreign Minister Fumio Kishida said at a special meeting on the CTBT on Sept. 29, “business as usual” efforts will not suffice. We must also recognize that actions speak louder than words.

I sincerely hope that today’s events will help catalyze the hard work necessary to produce a serious diplomatic action plan and renewed civil society focus on the CTBT.

20th Anniversary Should Be a Catalyst

In the United States we are looking ahead to possibilities for the CTBT in 2017 or 2018, when, with stronger presidential leadership and better political conditions in the Senate, there will be another opportunity to secure Senate advice and consent for U.S. ratification.

The Arms Control Association and a network of partner organizations and experts connected through our Project for the CTBT are ready to jump into action. There is a core of Senators who support the treaty and are ready to provide their support and leadership.

In the meantime, it is essential that we take steps to reinforce the norm against nuclear testing moratorium and raise awareness about why further nuclear testing would be a threat to international peace and security.

The Sept. 24 anniversary of the opening for signature of the CTBT provides a critical opportunity. We would recommend a two-part strategy.

Part one, requires a serious, high-level diplomatic outreach effort on the part of key “friends of the CTBT states” to engage with key hold-out states regarding their concerns about signing/ratifying the treaty, to reaffirm their support for the global testing taboo, and to encourage them pledge that they will consider CTBT ratification “at the earliest possible time.”

We made some limited progress in this regard at the ministerial meeting held earlier today. The gathering has been an important way to refocus high-level governmental attention on the challenges facing entry into force. But much more needs to be done. Unfortunately, some states did not send representatives at the requested ministerial level, most notably the United States, thus limiting the potential of the meeting.

Part two, could be the pursuit and adoption later this year or early next of a new UN Security Council resolution and a parallel UN General Assembly measure that:

Such an initiative, while not legally binding, would have tremendous political value in reinforcing the global norm against testing in the years ahead and possibly stimulating action by key hold-out states.

This initiative would be entirely consistent with the letter and spirit of the treaty. It would also help guard against the danger of treaty fatigue, including the possibility of the slow erosion of support for the Comprehensive Test Ban Treaty Organization.

The U.S. government appears to be open to such an approach. Deputy National Security Advisor Ben Rhodes said on June 6, that: “we will continue to consider ways to affirm the international norm against testing nuclear weapons.”

As we enter the 20th anniversary year of the CTBT, the time is right for a more robust effort in support of the CTBT and international security.