Arms Control TV showcases some of the the media appearances of Arms Control Association staff experts and Board Members, as well as significant statements given by experts and policy-makers.

On July 23, the Arms Control Initiative at the Brookings Institution and the Arms Control Association hosted former National Security Advisor Brent Scowcroft for a discussion of the New START treaty, assessing how its ratification and implementation will serve the U.S. national interest. 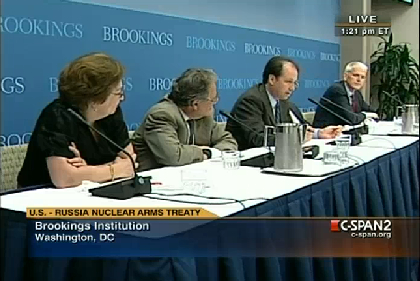 In April 2010, Daryl Kimball appeard on Bloggingheads TV alongside Mark Leon Goldberg of UN Dispatch.  They discussed the future of the nuclear Nonproliferation Treaty.

On March 31, ACA Executive Director Daryl Kimball spoke on a panel at the Carnegie Endowment for International Peace alongside Ambassador Susan Burk and Deepti Choubey.  They discussed the upcoming NPT Review Conference.

On February 18, Vice President Joe Biden delivered an address at the National Defense University on the Obama administration's nonproliferation and nuclear security agenda. Click here to read ACA's response to the speech.

Joseph Cirincione of the Ploughshares Fund, a major ACA funder, appeared on the news-parody show The Colbert Report in November 2009. He attempted to convince Stephen to take nuclear terrorism seriously.

-In September 2009, International Representative and Correspondent Oliver Meier gave the keynote speech at the Heinrich Boell Foundation's annual conference. The title of his talk was "Deterrence or Disarmament?: Global Zero and the reduced role of nuclear weapons in security policies in the 21st century."  Watch it here.

-In November 2009, Arms Control Association board member John Steinbruner participated in a discussion of the de-alerting of the U.S. nuclear arsenal at CSIS.

-On July 29, 2009 ACA Executive Director Daryl Kimball spoke to STRATCOM at its 2009 Deterrence Symposium. He was a member of a panel on the "Role of Nuclear Weapons in the 21st Century U.S. National Security Strategy." Video is available here.

-On October 7, 2009, Senior Fellow Greg Thielmann participated in a briefing to congressional staffers and the press on the Iranian nuclear program arranged by Congressman Ron Paul (R-TX). His remarks at the Cannon House Office Building built on his September ACA Threat Assessment Brief, "Is There Time to Prevent an Iranian Nuclear Weapon?" (PDF).  Watch it here.

-In August 2009 Daryl Kimball appeared with Mark Leon Goldberg on Bloggingheads TV. In this wide-ranging conversation, they discussed some of the new optimism in the arms control community, as well as the need for continued international diplomacy towards Iran and North Korea. Kimball's earlier Bloggingheads appearance is available here.

-On July 6, 2009, C-Span recorded an ACA press conference where
Daryl Kimball and Morton Halperin discussed the Moscow Summit and the START follow-on negotiations. Please click here to see a video of the event. A transcript of this event is available here.

-In May 2009, ACA analyst Peter Crail discussed the North Korean nuclear program with Russia Today.  What him here.

-In July 2009, Daryl Kimball appeared on NPR to discuss U.S.-Russian diplomacy. Listen to it here.

-In May 2009, Daryl Kimball appeared on the Diane Rehm Show. Listen to it here

-In 2008 Daryl Kimball appeared on C-Span's Washington Journal to debate the U.S.-India nuclear deal with Karl Inderfurth. Kimball argued that the deal would weaken the global non-proliferation regime. Watch it here.

-At ACA's 2006 Annual Meeting, Hans Blix offered some colorful commentary on his portrayal in Team America.

-In May 2005, Daryl Kimball appeared on the News Hour with Jim Lehrer on PBS. Watch it here.