Inside the Arms Control Association
November 2022

On September 21, Russian President Vladimir Putin issued another round of thinly veiled nuclear threats in the context of his ongoing military assault on the people of Ukraine. On October 6, President Biden called the “prospect of Armageddon'' the highest since the 1962 Cuban Missile Crisis. The President is justifiably alarmed and people in the United States and around the globe are far more aware and concerned about the risk of nuclear war. In response, our Arms Control Association team has been working overtime.

In the face of global criticism, Putin has, for now, dialed down his threat to use short-range, tactical nuclear weapons against Ukraine. But because the ongoing war poses escalation risks between Russian and U.S./NATO forces, we will continue to push hard – through public and private channels – for mutual restraint, renewed U.S. and Russian nuclear risk arms reduction dialogue, and a more robust international effort to condemn any and all types of nuclear weapons threats. 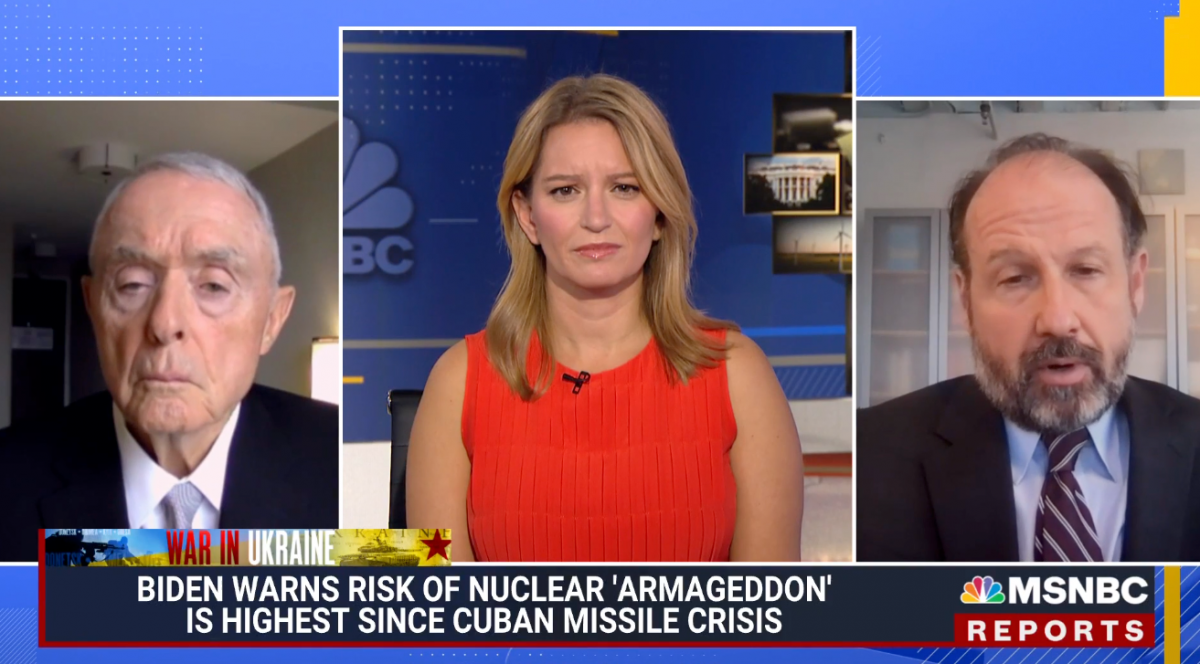 On October 11, we organized a virtual briefing on Putin’s latest nuclear threats with former Undersecretary of State Rose Gottemoeller, Hans Kristensen of the Federation of American Scientists, and myself on “What’s at Stake and What Can Be Done to Walk Back from the Brink?” This week, ACA’s partner project, the Physicists Coalition for Nuclear Threat Reduction, launched a campaign inviting scientists from around the world to endorse a statement “Condemning All Threats to Use Nuclear Weapons.”

To prevent catastrophe, we will continue to work with partner organizations and networks to call on global leaders to speak out against Putin’s flirtations with nuclear weapons use, and we will continue to underscore why everyone loses, especially Russia, if Putin breaks the 77-year-long taboo against using nuclear weapons. As I said in a recent MSNBC interview (see below), we need to do so now, not after the fact.

As always, we thank you for your support and interest. And if you find our information, resources, and work of value, please consider becoming a member or by making a donation.

Meeting in Istanbul in September and in Washington in October, members of the U.S.-German-Russian independent Commission on Deep Nuclear Cuts and the Young Deep Cuts Commission exchanged ideas and proposals for how U.S. and Russian negotiators could follow up the New Strategic Arms Reduction Treaty, if and when the two sides resume talks on a new nuclear arms control framework agreement. Since 2013, the Arms Control Association has served as the lead U.S. partner for the project, which is supported with funding from the German Federal Foreign Office.

ACA also continues to engage with senior officials from both governments on these issues. For more details, see our latest Issue Brief by Senior Policy Analyst Shannon Bugos “Toward a New Nuclear Arms Control Framework Arrangement.”

ACA also continues to press for the resumption of negotiations on a new nuclear arms control framework as President Biden first proposed at ACA’s June 2 Annual Meeting and again on August 1 at the NPT Review Conference. On Nov. 9, the State Department confirmed that Russian and U.S. officials will hold the first Bilateral Consultative Commission meeting under New START since the war in Ukraine.

The Arms Control Association policy team and several members of the Board of Directors were actively engaged in the 2022 Carnegie Endowment for International Peace Nuclear Policy Conference in Washington, D.C. held in October.

After a seven-month delay, the Pentagon released its public version of the classified Nuclear Posture Review (NPR),  updating U.S. nuclear weapons policy. As Daryl Kimball noted in The New York Times, the NPR sends “a muddled message,” about the role of nuclear weapons in U.S. defense strategy and foreign policy at a time when the United States should more clearly de-emphasize the salience of nuclear weapons and the threat of nuclear weapons use.

Our preliminary analysis of the NPR also highlights that the document  appropriately and smartly "places renewed emphasis on nuclear arms control, nuclear nonproliferation, and risk reduction.” Look for more coverage on the NPR in the December issue of Arms Control Today.

Is It Time for a "Plan B" to Address Iran’s Accelerating Nuclear Program?

As Russia creates chaos, North Korea tests more ballistic missiles, and U.S. relations with China remain strained, efforts to negotiate a return to U.S. and Iranian compliance with the 2015 Joint Comprehensive Plan of Action are faltering. Get the latest analysis from our Director for Nonproliferation Policy Director, Kelsey Davenport in our latest Issue Brief.

The Chemical Weapons Convention Coalition, which is based at the Arms Control Association, has received another two years of project support from Global Affairs Canada and the German Federal Foreign Office. The Coalition brings together independent experts and NGOs from around the world looking to advance progress toward the elimination of all chemical weapons, strengthening the taboo against CW use.

Sadly, accomplished CWC Coalition program coordinator, Leanne Quinn is moving on to work with the U.S. Department of State, and we are now accepting applications for the position. Details are online here.

ACA has had fabulous interns who have gone on to make great contributions to the field.  For example, Leanne Quinn was an ACA intern in 2019, who we later hired in 2021 as the coordinator for the CWC Coalition. Monica Montgomery, an ACA intern in 2018, is now a policy analyst at the Center for Arms Control and Nonproliferation. You can read her feature article, “The U.S. Defense Budget and Russia’s War on Ukraine” in the November issue of Arms Control Today.

Please see the details for both internships here. And please help us spread the word.

Your contributions to ACA help us further develop our internship program and train the next generation of arms controllers. We are grateful for your generosity.

ACA In the News