For more than 40 years, the John D. and Catherine T. MacArthur Foundation has been one of the largest and most important philanthropic institutions supporting work in the nuclear risk reduction and arms control field. 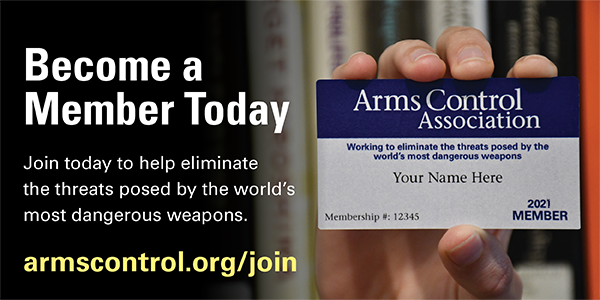 But as a report published by Politico this week documents, the MacArthur Foundation’s board of directors decided earlier this year to phase out its work in the field by the end of 2023.

Grants from MacArthur for non-profit research and policy advocacy centers, to major academic programs, to some projects led grassroots organizations which seek to advance efforts to prevent the use and spread of nuclear weapons and nuclear material, to advance efforts on disarmament, and to address the health and environmental effects of nuclear weapons production and testing.

Because MacArthur Foundation leaders understood that difficult problems like nuclear weapons require long-term commitment and persistence to achieve lasting results, their investments have made a huge difference--in some cases helping to change the course of nuclear history for the better.

ACA has been a grateful beneficiary of the foundation’s support for many of these past years, including a special 2011 creative and effective institution award (an organizational “genius grant”) for being an “exceptional organization that effectively addresses pressing national and international security challenges” with an “impact that is disproportionate to its small size.”

According to foundation’s announcement, the decision was based on the board’s judgement that despite significant evidence of their grantee’s impact in many areas of nuclear policy and nuclear risk reduction, they determined “there was no longer a line of sight” to meet their specific “Big Bet” goal, which they established in 2015, “to end production and eliminate the stockpiles of weapons-usable material” by 2025.

Since 2014, the MacArthur Big Bets initiative made grants to 87 organizations totalling $104 million. Beginning this year MacArthur will start implementing a three-year $30 million capstone grantmaking project, which will involve the Arms Control Association, before it exits the field.

We certainly appreciate and applaud the MacArthur Foundation for its enormous and long-running contributions to work that has reduced the the nuclear danger.

But the MacArthur Board of Directors' decision will undoubtedly complicate our ongoing and future efforts -- and those of our partner organizations and colleagues -- to address the daunting array of nuclear threats and train the next generation of nuclear arms controllers. It remains puzzling as to why, if MacArthur's Board determined it could not meet the particular "Big Bet" goal it had set in the nuclear area, they did not adjust their goals and strategy and focus their resources toward other areas of their nuclear weapons-related grantmaking where there is a clear "line of sight" to achieve tangible and positive results.

As my long-time colleague Joan Rohlfing, president and COO of the Nuclear Threat Initiative, put it: "It's a big blow for the field. Now is the time to be really investing more resources in innovation for problem solving within this space."

The Arms Control Association, which has a modest annual budget of $1.6 million and a full-time staff of 11.5 full-time employees, currently receives $400,000 from MacArthur in general support.

Our staff and Board of Directors have developed a good plan for securing the new resources and contributions to sustain  our work in the years ahead.

But the success of our plan--and our work to address the threats posed by the world’s most dangerous weapons--depends in part on the support of generous donors like you.

As I  told Bryan Bender at Politico for his story:

“It would be a mistake to believe that nuclear weapons no longer pose an existential threat to humanity.

Investments in civil society efforts to halt and reverse the growing global nuclear arms race and get back on the path towards a world without nuclear weapons are as important, if not more important and urgent, than ever.”

Look for more information in the coming weeks on how you can help the cause and be part of the solution.

When Ukraine Traded Nuclear Weapons for Security Assurances: An Interview with Mariana Budjeryn