In less than a year—on February 5, 2021—the last remaining treaty limiting the world’s two nuclear arsenals is due to expire unless the U.S. president decides to take up Russia’s offer to extend it for another five years.

To date, however, the Trump administration has yet to officially decide on the future of the New Strategic Arms Reduction Treaty. Instead, Trump is talking about a new and more ambitious treaty involving all types of U.S. and Russian nuclear weapons as well as those of China. These are worthy goals, but a new treaty cannot be concluded before 2021. Extending New START is the logical first step.

As our Board Chair Tom Countryman said at our press conference last week, “from ACA’s perspective, extending New START should be the easiest foreign policy decision Trump can make. Failure to extend the treaty, on the other hand, would be one of the worst decisions the President could make.”

The Arms Control Association holds a press conference Jan. 28 on “The Case for New START” with the former assistant secretary for global strategic affairs at the Pentagon, the director for defense policy with the American Enterprise Institute and a former U.S. ambassador to NATO.

As we head into 2020, the Arms Control Association continues to lead the way in building bipartisan support for extension of New START. We have successfully helped to rally support on Capitol Hill through legislation introduced by Reps. Eliot Engel (D-N.Y.) and Michael McCaul (R-Texas)—H.R. 2529—and Sens. Chris Van Hollen (D-Md.) and Todd Young (R-Ind.) —S. 2394. These parallel bills express the Sense of Congress that the United States should seek to extend the New START Treaty so long as Russia remains in compliance.

Our staff team, led by Kingston Reif and Shannon Bugos, also convene a diverse and influential “Friends of New START” network of organizations and experts, where we discuss strategy and coordinate activities. Through our ACA publications and op-eds we are helping to define the debate, making the case for the treaty, and underscoring the strong support from U.S. allies and military leaders for the treaty’s extension. With support from the Prospect Hill Foundation, our New START media collaborative project is helping to raise the public profile of the issue despite today’s crowded news environment.

The next few months are critical. We'll be working hard to make New START extension a key issue at the upcoming Nonproliferation Treaty Review Conference at the UN. And we invite you to take action by writing an email to your Congressional representatives about the need to extend New START.

This year as we mark the 75th anniversary of the dawn of the nuclear age and the 50th anniversary of the Non-proliferation Treaty (NPT), we face an ever more serious array of challenges. Join us at the Washington Court Hotel on Capitol Hill (at 525 New Jersey Avenue NW, Washington, DC). The conference includes a lunch buffet and a post-event networking reception featuring special guests.

Register today for discounted early bird pricing (available through March 27). Stay informed about updates to the program and featured speakers at armscontrol.org/ArmsControl2020.

Last week, the Trump administration announced it would reverse longstanding U.S. policy not to deploy landmines outside of the Korean Peninsula, and would give combatant commanders the authority to use “self-destructing” mines when they deem necessary.

In coordination with our partners with the Campaign to Ban Landmines, the Arms Control Association responded quickly and firmly. In a press statement, we underscored that “the resumption of the use of anti-personnel landmines and continued stockpiling and production of these indiscriminate weapons is militarily unnecessary and dangerous.” 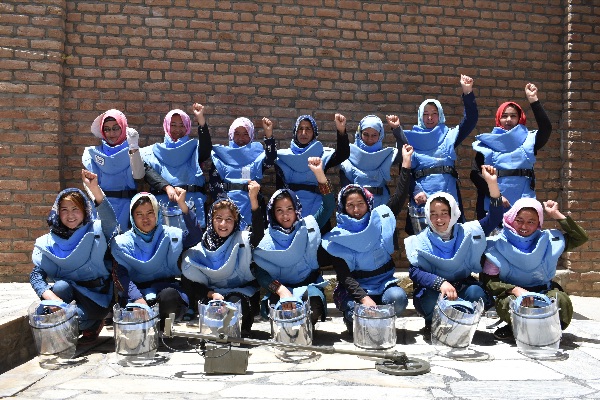 As our senior fellow Jeff Abramson told The New York Times: “The world has rejected landmines because they are indiscriminate and disproportionately harm civilians, who make up the vast majority of landmine casualties. Technical solutions to make land mines self-destruct or otherwise labeled as ‘smart’ have failed to work as advertised and been rejected by the 164 counties, including all U.S. NATO allies, that have joined the Mine Ban Treaty.”

Executive director Daryl Kimball told The Washington Post: “The Pentagon has not explained what military challenge, in which specific theater of operations, requires the deployment of new land mines for the first time in nearly three decades.”

In the coming weeks, we will push Congress to impose legislative restriction new landmine deployments.

Working with the Catholic Community on Nuclear Disarmament

Catholic leaders and American Catholic communities have, for many decades, weighed-in on the moral and ethical issues surrounding nuclear weapons, nuclear deterrence, and the need for progress on nuclear disarmament. Pope Francis’ recent and powerful set of speeches in Hiroshima and Nagasaki and his call to action to eliminate nuclear weapons have advanced the discussion.

The Arms Control Association Association has worked with U.S. Catholic thought leaders on nuclear issues for many years on nuclear matters and we continue to do so. This past month we participated in two major Washington-based conferences organized by church leaders. 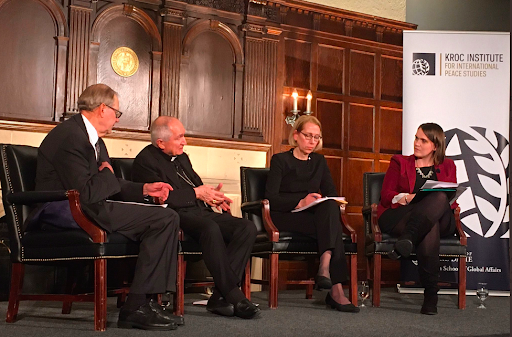 On January 30, the Arms Control Association’s Kelsey Davenport (at right) moderated a discussion at Georgetown University with Archbishop Silvano Tomasi, senior advisor to Pope Francis following a keynote address by the Archbishop. Joining Kelsey on stage were Joan Rohlfing of the Nuclear Threat Initiative, former Ambassador James Timbie of the Hoover Institution. Archbishop Tomasi is the Pope’s advisor on nuclear issues.

On January 31, Georgetown organized a day-long conference titled “The Pope and the Bomb,” which included a talk by Arms Control Association board member Professor Maryann Cusimano Love.

Earlier in the week, Executive Director Daryl G. Kimball spoke at a workshop on at the Catholic Social Ministry Gathering on the value of extending the New START agreement. Many of the 500 participants at the Gathering met with their members of Congress on key legislative priorities, including promoting New START.