Fifty years ago, on Nov. 17, 1969, the United States and the Soviet Union launched the first-ever Strategic Arms Limitation Talks (SALT) in Helsinki, Finland. The chief American negotiator was Gerard Smith, who had been appointed the director of the U.S. Arms Control and Disarmament Agency by then-president Richard Nixon. 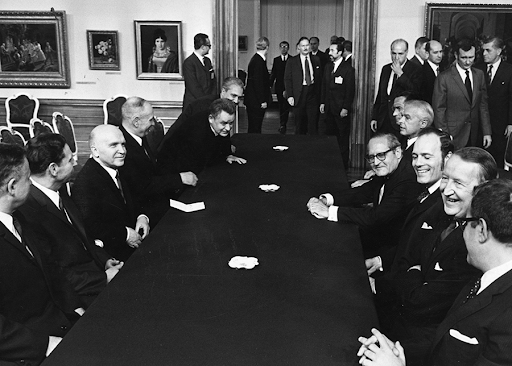 Negotiated in the midst of severe tensions, the SALT agreement and the Anti-Ballistic Missile (ABM) Treaty were the first restrictions on the superpowers’ massive strategic offensive weapons, as well as on their emerging strategic defensive systems. The SALT agreement and the ABM Treaty slowed the arms race and opened a period of U.S.-Soviet detente that lessened the threat of nuclear war.

SALT was an executive agreement that capped U.S. and Soviet intercontinental ballistic missiles (ICBM) and submarine-launched ballistic missile (SLBM) forces. Under SALT, both sides pledged not to construct new ICBM silos, not to increase the size of existing ICBM silos “significantly,” and capped the number of SLBM launch tubes and SLBM-carrying submarines. The agreement limited the United States to 1,054 ICBM silos and 656 SLBM launch tubes. The Soviet Union was limited to 1,607 ICBM silos and 740 SLBM launch tubes. Unfortunately, the agreement did not restrict strategic bombers and did not cap warhead numbers, leaving both sides free to enlarge their forces by increasing their bomber-based forces and by exploiting a newly developed technology, the deployment of multiple warheads (MIRVs) on their ICBMs and SLBMs.

The Anti-Ballistic Missile (ABM) Treaty limited strategic missile defenses to 200 interceptors (later 100) each and prevented the emergence of a destabilizing offense-defense arms race. In June 2002, the United States unilaterally withdrew from the ABM Treaty over Russian objections and warnings from independent experts about the adverse effects on strategic stability and further efforts to reduce offensive nuclear stockpiles in the future.

Though imperfect, the agreements that resulted from the SALT negotiations were a modest first step toward meeting U.S. and Russian obligations under Article VI of the 1968 Nuclear Nonproliferation Treaty to pursue effective measures to end the arms race and achieve nuclear disarmament. The SALT and ABM agreements also set a standard for future bilateral nuclear arms control treaty negotiations that would lead to more ambitious verifiable limitations and reductions of two sides' excessive nuclear stockpiles.

After the ABM Treaty and SALT agreement were concluded in 1972, Smith left the government but continued his work to prevent a nuclear catastrophe in part by joining the Board of Directors of the newly-formed Arms Control Association. He served as the Association’s chairman from 1981 to 1992.

We thank those in government and outside government who have, over the years, helped lead us away from nuclear catastrophe and we pledge to preserve and build upon their achievements in the years ahead.

Biden, Putin to Meet in June

Back From the Brink? Next Steps for Biden and Putin