After a long and extraordinarily productive life and career that made our world a safer place, Lawrence D. Weiler, one of the early pioneers and architects who helped negotiate the first major nuclear arms control, risk reduction, and nonproliferation agreements, died last Sunday, Feb. 24 from complications of pneumonia. He was 98.

Larry Weiler was in the right place at the right time to make a difference during difficult times.

Weiler served as the ambassador and U.S. Coordinator for the UN General Assembly special session on disarmament and worked under six different presidents — from Dwight D. Eisenhower to Jimmy Carter.

Weiler was one of the key U.S. negotiators of the 1963 Hotline Agreement, and he was involved in difficult negotiations on the 1963 Limited Test Ban Treaty, the talks that led to the 1968 nuclear Nonproliferation Treaty (NPT), as well as the 1972 Anti-Ballistic Missile (ABM) Treaty and the Strategic Arms Limitation agreement (SALT I).

His many contributions were crucial to helping make our world a safer place.

Born in Salt Lake, Weiler studied at the University of Utah. He ranked second in his academic class – behind only one other student, the woman who would later become his wife of 72 years, Mary Recore Weiler.

Larry then served in World War II in an armored artillery unit deployed in Europe and was awarded the Bronze Star for action at the Battle of the Bulge. After returning home, he received his masters and doctorate degrees in political science at Stanford University.

Weiler began his career in arms control at the State Department in 1952, and soon thereafter served on the staff of Harold Stassen, the special assistant for disarmament to President Eisenhower.

In the 1960s, he helped establish the Arms Control Disarmament Agency (ACDA), and was a key member of the U.S. negotiating team that concluded the 1963 Hotline Agreement, the first such legally-binding nuclear risk reduction agreement of its kind. 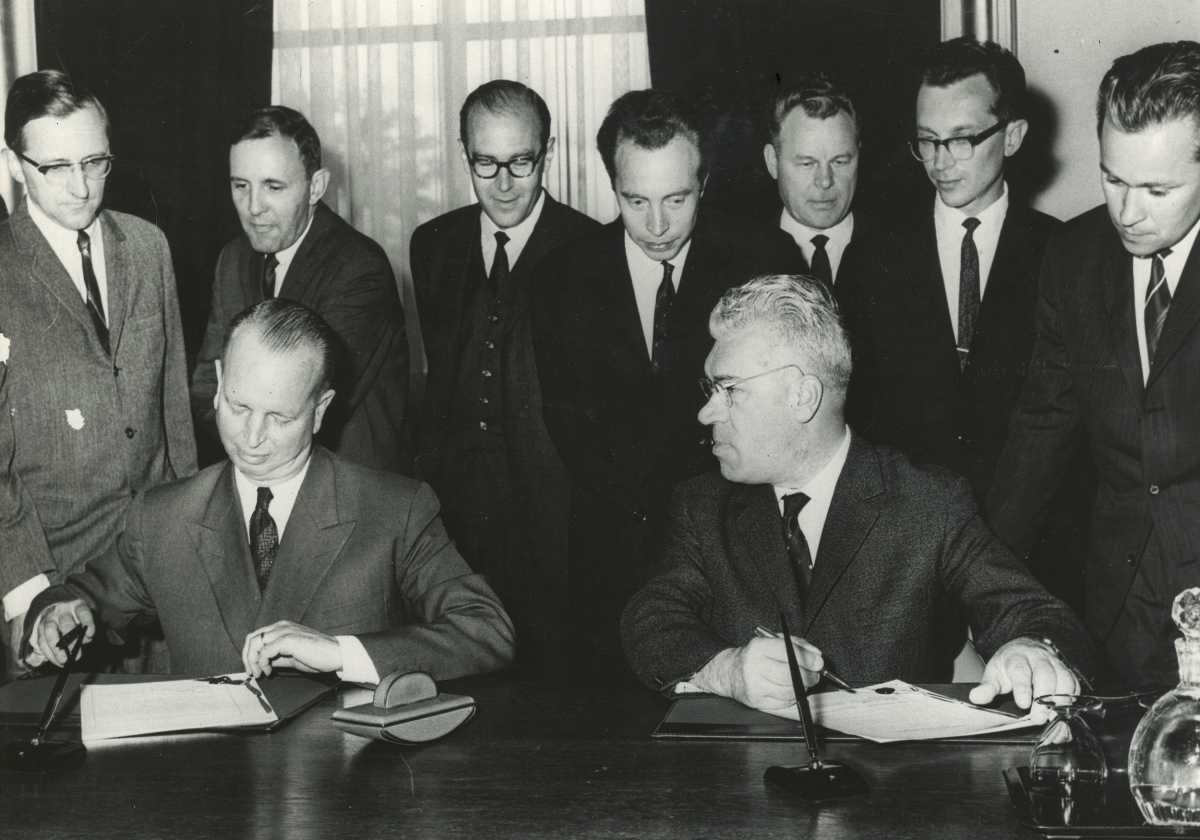 Larry was a key member of the U.S. delegation to the Eighteen Nation Committee on Disarmament (ENDC) from 1966 to 1968, where the negotiations on the NPT took place. In 2017, Arms Control Today published an in-depth interview with him on the NPT talks and the legacy of the treaty five decades on.

Weiler also delivered remarks on the opening panel of last summer’s State Department conference commemorating the 50th anniversary of the signing of the NPT. Shortly thereafter, on July 1, 2017, he was interviewed on NPR’s Weekend Edition about the NPT and today’s nuclear weapons challenges.

After the NPT negotiations, Weiler went on to work closely with ACDA Director Gerard Smith who, in 1969, was named to be President Richard Nixon’s Chief Delegate to the SALT I talks, which yielded the ABM Treaty and SALT I, the first strategic arms control agreements.

From 1973 to 1977, Larry was Adjunct Professor at Stanford and named a fellow at its Center for Advanced Study. In 1977, he and his wife returned to Washington where he served as U.S. Ambassador and Special Coordinator for the United Nations Special Session on Disarmament. He later taught at George Washington University. He published numerous articles on nuclear weapons policy and arms control, including in Arms Control Today. He was also the author of three books, including the first college textbook on arms control.

Through the years, Weiler was not afraid to advocate for the correct position even when it was not the popular position to take. For instance, he was an early proponent of a U.S. no-first-use policy. In February 1983, he wrote a one-of-a-kind short history of the no-first-use debate for The Bulletin of the Atomic Scientists, in which he noted:

“Contrary to the general impression, the idea of No First Use is as old as nuclear weapons. And in a very real sense, the first advocate of outlawing and foregoing use, or first use, was the U.S. government. Thus, the idea is neither revolutionary nor 'un-American.'”

In retirement, he maintained an active interest in the issues of the day. In 2006, he had an exchange with President George W. Bush when the 43rd president visited Weiler's Riderwood Village retirement community in Silver Spring, Maryland. Bush was there to talk about and take questions on health care issues.

But at the end of the event, which was broadcast live on C-SPAN, Weiler challenged him to consider adopting a no-first-use policy and he criticized Bush’s controversial deal for nuclear cooperation with India, which Larry told him was a threat to the long-term viability of the NPT. The exchange became headline news in The New York Times and Los Angeles Times. You can watch the exchange here. 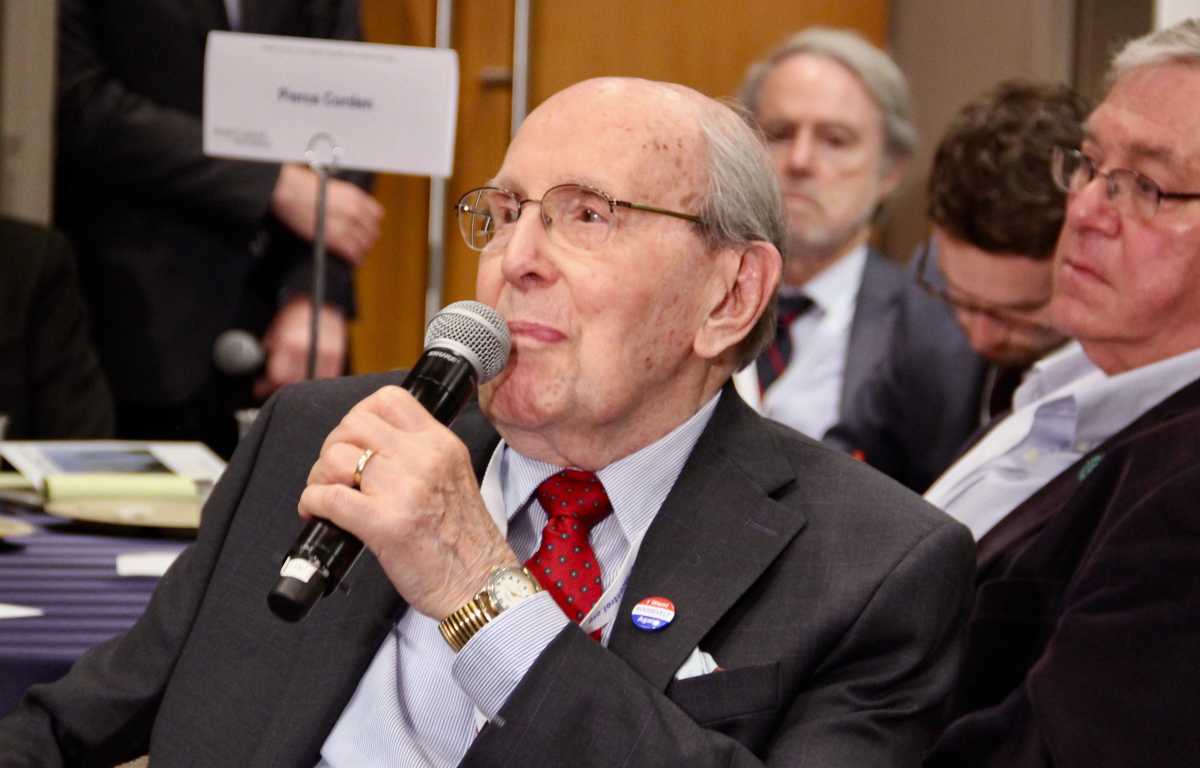 Long into his “retirement,” his mind was sharp and his insights as keen as ever. He was a regular attendee at Arms Control Association events year after year. At the age of 97, I had the honor of co-authoring an op-ed with him that appeared in Fortune titled: “It’s Time for Trump and Putin to Talk About Nukes.”

Despite today’s difficult nuclear challenges, Larry Weiler remained optimistic and was encouraging to “young” folks like me, as well as the entire ACA staff, especially our junior staff. And he was a wonderful guy.

In the summer of 2018, Larry wrote a note to share with Arms Control Association members. He said:

"Over the 65 years of my involvement in the field of arms control, I have seen how effective nonproliferation agreements have reduced the danger of nuclear war and curbed the spread of nuclear weapons.

Though we have achieved progress, our work is not over. The global nonproliferation and disarmament regime that many in and outside the government have helped to build is at risk—but I am still optimistic.

Why? Because even during the dark days of the Cold War, when it didn't seem like things were possible, we persisted. American and Soviet negotiators engaged with one another in an effort to reduce nuclear risks.

If we could do it then, we can also find practical ways to tackle today’s tough nuclear challenges.”

Somehow, we can, and we will.