Authored by Kelsey Davenport on December 13, 2018

At a Dec. 12 UN Security Council meeting on Iran, U.S. Secretary of State Mike Pompeo again raised the specter of Iran’s ballistic missile program and called for more stringent missile restrictions than those currently in place under Resolution 2231, which endorsed the Joint Comprehensive Plan of Action (JCPOA) on Iran’s nuclear activities and imposed constraints on Iran’s ballistic missile and conventional arms activities.

While Iran’s ballistic missile activities pose a regional threat and a proliferation risk, the Trump administration’s blatant mischaracterization of UN Security Council restrictions on Iran’s missile activities and its withdrawal from the 2015 Iran nuclear deal make it far more difficult to forge cooperative action to address that threat.

As noted in the Dec. 8 UN Secretary General’s biannual report on implementation of Resolution 2231, there is compelling evidence that Iran is violating the resolution’s prohibitions on transferring arms and ballistic missiles (see below for details). However, there is no binding prohibition on missile testing, and Pompeo’s arguments that Iran’s ballistic missile tests violate 2231 do not hold water. The resolution only calls upon Iran to refrain from activities on missiles designed to be capable of delivering nuclear weapons. 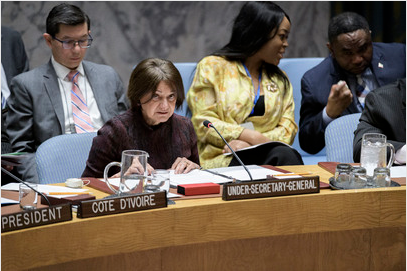 While neither testing nor transfer of missiles by Iran violate its obligations under the JCPOA, they are unhelpful and provocative. It would be in Tehran’s interest to fully abide by the restrictions called for in Resolution 2231. In his report, UN Secretary General António Guterres rightly called on Iran to “carefully consider and address” concerns related to arms and missile activities.

Pompeo said the United States would “work with other members of the Council” to reimpose the provisions from a past resolution, 1929, which prohibited Iran from testing nuclear-capable ballistic missiles, or systems capable of delivering a 500-kilogram payload 300 kilometers. But it is unclear how the United States plans to bring back 1929’s provisions, given Washington’s isolation and loss of credibility over violating the JCPOA.

While other states share U.S. concerns over Iran’s ballistic missile activities, the Trump administration has demonstrated a disregard for security considerations of key allies in Europe, which continue to support the JCPOA. The U.S. decision to withdraw from the JCPOA earlier this year has hardened Iran’s position on its missile program and it has alienated key U.S. allies on and off the UN Security Council. Under these conditions, it is unlikely the United States can win widespread support for expanding restrictions on Iran’s ballistic missile activity.

It is also hypocritical for Pompeo to say that Iran is “violating” the deal by engaging in ballistic missile testing that it is only “called upon” not to undertake when Washington is guilty of a similar offense. The United States, as a UN member, is “called upon” in Resolution 2231 to support the JCPOA and refrain from undermining it. So the Trump administration, by reimposing sanctions and threatening to penalize entities conducting legitimate business with Iran, is also failing to advance the goals and intent of Resolution 2231.

The Secretary General’s report noted the International Atomic Energy Agency’s documentation of Iran’s full implementation of the nuclear deal, but the sections in his report pertaining to the JCPOA focus primarily on the procurement channel. As part of the procurement channel process, the Security Council approves or denies requests by states to engage in the sale or transfer of dual-use goods to Iran. Specific to the procurement channel, the report said an additional five proposals were submitted since the last report was issued in June. Of the 42 total proposals, 28 have been approved, four denied, nine withdrawn, and one is under review.

The Secretariat is also looking into additional information provided by the United States on two reported transfers of dual-use materials to Iran. The United States says the transfers of carbon fiber and aluminum alloys required procurement channel approval. The report said the Secretariat is seeking clarification on those cases and did not indicate if the transfers violate Resolution 2231 or did not require approval.

The report also clarified two past cases of possible procurement channel violations, noting that states provided assessments to the Secretariat that the items transferred to Iran did not meet criteria necessary for procurement channel approval, and said another two cases are still being reviewed.

The Secretary General also expressed regret over the U.S. decision to withdraw and reimpose sanctions, stating that he firmly believes that such actions "do not advance the goals set out" in the JPCOA and Resolution 2231, “in which all Member states, regional organizations and international organizations were called upon to support the implementation” of the nuclear deal and refrain from undermining in. He also welcomed initiatives by the remaining parties to the JCPOA to “protect the freedom of their economic operators to pursue legitimate business” with Iran in accordance with Resolution 2231.

Unsurprisingly, the back-and-forth over the meaning of “designed to be nuclear capable” continues, and that debate is documented in the Resolution 2231 report. The report quotes a letter to the Secretary General from Iran stating that the country is not prohibited from developing missiles and has refrained from activities related to ballistic missiles designed to be nuclear capable. The letter said there is no evidence that Iran’s ballistic missiles possess necessary features for delivering nuclear warheads.

Israel, in a letter referenced in the report, said that seven missiles tested by Iran from February to August 2018 and the missiles launched by Iran into Syria Oct. 1 crossed the threshold laid out in Resolution 2231. The United Kingdom, France, and Germany also described the missiles fired into Syria as “inherently capable of delivering nuclear weapons” and noted that Iran was called upon in Resolution 2231 not to undertake these activities. Iran defended its use of ballistic missiles against targets in Syria as “legitimate self-defense” recognized by the UN charter.

While the language on testing is ambiguous and nonbinding, the prohibition in Resolution 2231 on transferring ballistic missiles and related technology without Security Council approval is clear-cut and binding on Iran. The report notes that the Secretariat examined several additional missiles fired by the Houthis into Saudi Arabia and found features consistent with Iranian ballistic missiles. The prior report issued in June contained similar findings.

The report did not conclude definitively that the missiles were transferred from Iran in violation of Resolution 2231, but says that the Secretariat is trying to establish when certain components were produced. If the components were produced after Resolution 2231 went into effect in January 2016, it would indicate that the missiles were transferred in violation of the Resolution.

The Secretary General’s report detailed additional evidence pointing toward violations of the conventional arms restrictions in Resolution 2231. The report described anti-tank guided missiles recovered by Saudi Arabia in Yemen and inspected by the Secretariat in September as having “characteristics of Iranian manufacture” and production dates in 2016 and 2017. The dates are significant because Resolution 2231 came into effect in January 2016, so these missiles could not have been transferred prior to the transfer prohibitions.

The report also noted that the Secretariat is continuing to look into interdicted surface-to-air missiles destined for the Houthis that “appeared consistent with those of the Iranian Sayyad-2C” and UAVs with design features similar to the Iranian Abadil-2 UAV.

There is significant evidence that Iran is violating Resolution 2231’s provisions prohibiting the transfer of conventional arms and ballistic missiles. While these actions are not a violation of the JCPOA, they are dangerous, destabilizing, and undermine Resolution 2231. As the UN Secretary General concludes investigations into these allegations of noncompliance, the Security Council should take action to ensure full implementation of the resolution. However, the Trump administration’s continued, blatant mischaracterizations of the resolution and its actions jeopardizing the JCPOA only make it more difficult to mitigate the risk posed by Iran’s ballistic missile program.—KELSEY DAVENPORT