In his May 21 speech at the Heritage Foundation, the new U.S. Secretary of State, Mike Pompeo, defended Trump’s decision earlier this month to violate the 2015 multilateral nuclear deal with Iran, withdraw from the agreement, and pursue a “better deal.” 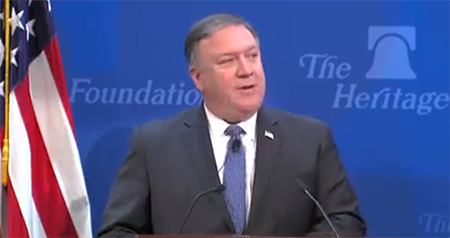 But the Trump administration’s vision of a “better deal” with Iran is like a mirage in the desert—it may look good, but it is not real and there is no path to get there. And by trying to, the United States only risks the deal at hand.

What Pompeo failed to articulate is how that “better deal” is possible, given that key U.S. allies and Washington’s former partners in the deal soundly rejected Trump’s reckless decision to abandon the 2015 agreement, known as the Joint Comprehensive Plan of Action (JCPOA).

In addition to blaming the JCPOA for failing to solve problems it was never intended to address, like Iran’s destabilizing regional activities, Pompeo delivered an often-heard criticism that the “fatal flaws” in the deal, particularly the measures that expire over time, will result in an inevitable Iranian nuclear weapons capability and incentivize proliferation in the Middle East.

As a former director of the CIA, Pompeo should realize that U.S. intelligence community assessed in 2007 that Iran already has a nuclear weapons capability. No deal can put that genie back in the bottle.

What is necessary is what the Iran deal already does—verifiably limit Iran’s nuclear activities and block the country’s pathway to nuclear weapons. And the value of the permanent barriers—more intrusive monitoring and verification and a prohibition on certain weaponization activities—are conveniently ignored by the Trump administration.

What Pompeo says the Trump administration wants is a deal that requires Iran to abandon enrichment and reprocessing in perpetuity, allow unqualified access by inspectors, end ballistic missile proliferation, and a host of other regional activities. In return, he says, the United States will put all sanctions on the table and consider normalizing the diplomatic relationship.

A deal that blocked all of Iran’s uranium enrichment activities may have been possible when Iran had only a few hundred centrifuges in 2005. But Iran has nearly 20,000 by 2015 when the JCPOA was finalized -- and after Trump’s violation of the JCPOA, it won’t be possible in 2018 to coerce Iran to go to zero. Not only is Iran highly unlikely to give up capabilities its sunk millions of dollars into pursuing, but Tehran has no incentive to believe that the United States will abide by its commitments in any future deal.

Pompeo claims, however, that the United States will accomplish this “better deal” by applying “unprecedented financial pressure” and the “strongest sanctions in history” on Iran. What Pompeo did not outline is how the United States plans to get there—particularly given the strong backlash to Trump’s reckless decision to violate the JCPOA.

What Pompeo and the Trump administration seem to be forgetting, is that the pressure that led to negotiations with Iran in 2013 was the result of careful diplomacy that crafted global support for tightening the net on Iran. Countries like Russia and China were persuaded to get on board with restrictions, against their economic interest, because preventing an Iranian nuclear weapon was a global imperative.

After Trump’s decision earlier this month to trash effective and verifiable agreement that had near universal international support, other states have little motivation to support a new U.S. sanctions regime—particularly when that agreement is endorsed by the UN Security Council in a resolution that calls upon all states to support the JCPOA and refrain from undermining it.

Nor was it just U.S. sanctions that provided the pressure. EU measures were critical to helping push Iran into negotiations. Sanctions such as the oil embargo passed in 2012 dealt serious blows to Iran’s economy. At the time, only China exceed Europe in oil imports from Iran. The 2012 decision by SWIFT, the Belgium-based company that facilitates cross-border payments, to cut off Iranian banks blacklisted by the EU over Iran’s nuclear activities was “extraordinary and unprecedented” according to a press release issued by the service at the time. That move dealt a serious blow to Iran’s ability to conduct transactions.

The United States is not going to get that level of support this time around—not even for its own sanctions. EU Foreign Policy Chief Federica Mogherini has already made clear it is “determined to act in accordance with its security interests and to protect its economic investments.”

At a May 18 meeting of the European Commission, the EU President Jean-Claude Juncker announced unanimous backing to activate the EU’s blocking statute, which forbids companies in the EU from complying with U.S. sanctions. In short, the EU is already sending a strong message that it will not—putting in doubt from the onset Pompeo’s pursuit of the “strongest sanctions in history” and with it, leverage for any new negotiations with Iran.

The Iran deal is accomplishing its key objective—verifiably blocking Iran’s pathways to nuclear weapons. The Trump administration is only jeopardizing that success and endangering U.S. national security by pursuing a mythical ‘better deal.”