Authored by Daryl G. Kimball and Alicia Sanders-Zakre on December 6, 2017

One of the catalytic forces behind the pursuit and conclusion of the new Treaty on the Prohibition of Nuclear Weapons in recent years has been the voices of the hibakusha, the survivors of the atomic bombings of the cities of Hiroshima and Nagasaki, as well as the people across the globe who have been adversely affected by more than seven decades of nuclear weapons production and testing. 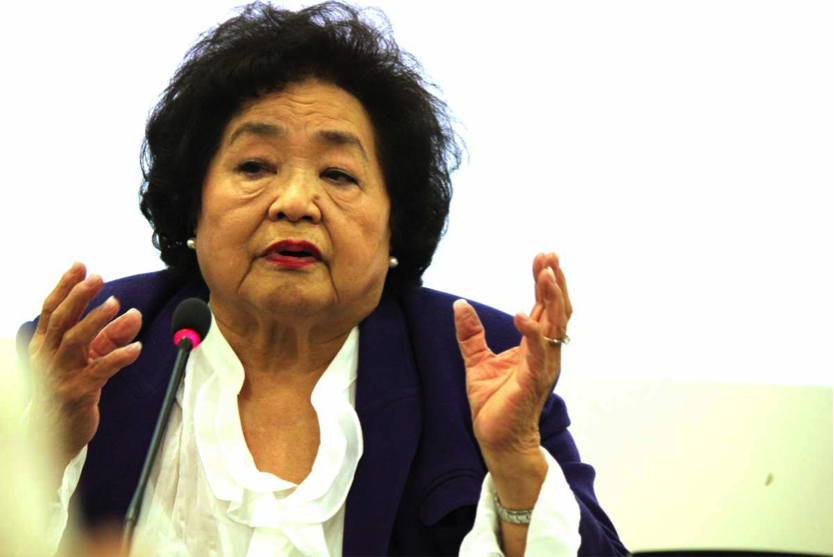 The preamble of the new prohibition treaty, which was opened for signature at UN headquarters in New York on September 20, notes “the unacceptable suffering of and harm caused to the victims of nuclear weapons (hibakusha), as well as those affected by the testing of nuclear weapons” and the preamble also recognizes that nuclear weapons pose “grave implications for … the health of future generations and have a disproportionate impact on women and girls, including as a result of ionizing radiation.”

One of the leading hibakusha voices and strongest and most tireless advocates for a legally-binding treaty to prohibit nuclear weapons is Setsuko Thurlow, who was voted the "2015 Arms Control Person of the Year.” Thurlow will be one of the speakers at the 2017 Nobel Peace Prize Award Ceremony on behalf of the International Campaign for the Abolition of Nuclear Weapons on December 10 in Oslo, Norway. The ceremony will be broadcast live and can be viewed online here.

Earlier this spring, Thurlow was contacted by 14-year old Nola James, a high school student living in Washington, D.C. who asked Thurlow to answer questions about her experience and provide advice for the next generation of young people concerned about the dangers of nuclear weapons.

Thurlow was 13 years old when the “Little Boy” bomb was dropped on the city of Hiroshima. With the permission of Ms. James, Thurlow has shared the questions and her responses with ArmsControlNow.org.

Q. What has motivated you to keep sharing with others your very difficult experiences, especially after the hate and threats you received when you were in the United States?

After the occupation of Japan by the United States Army after World War II, when more information became available about the atomic bombings, it was the beginning of a new age of awareness in Japan about the dangers of nuclear weapons. This was especially true because the Americans and the Russians got into a nuclear arms race and both were conducting nuclear weapons testing in the atmosphere.

So those of us in Hiroshima who lived through the atomic bombing and who lost loved ones in the war got the feeling that we needed to do something to prevent the atomic bombings from happening again. We began to realize that we had to use our experience to speak to the world about the dangers of the atomic bomb.

At that time, in the 1950s and 1960s, Hiroshima became very much a pacifist city, and its citizens were beginning to speak out for peace. Hiroshima has become a peace city driven by the spirit of its citizens and the atomic bomb survivors like me. I grew up there and was among those who began to realize that I needed to overcome my fears and to speak out for the loved ones that I lost in the bombing. Today in Hiroshima, the government of the City of Hiroshima has peace promotion division at City Hall that runs the Hiroshima Peace and Culture Foundation and it runs the Hiroshima Atomic Bomb Museum and it hosts the Mayors for Peace Organization that works with city leaders around the world, including with the Mayors of Washington D.C. and New York, for the elimination of nuclear weapons.

Yes, when I came to the United States to study I was receiving unsigned hate letters because of my critical comments about the U.S. hydrogen bomb tests over the Pacific Islands. After I began receiving these letters, I spent about a week thinking, of soul searching, and I came out with a stronger sense of responsibility that I needed to continue to keep speaking out. If I, a survivor of the first atomic bombing, was not going to speak out, who was going to speak out to help prevent such a horrible thing from happening to anyone else, ever again?

Back then and even now, I had strong memories of what happened that day in August of 1945 when I was just 13 years old. All of my memories and the images of those who were killed keep driving me to do what I do, to speak out for peace and a world free of nuclear weapons.

In particular, I remember my four-year old nephew who kept asking for water after the bombing. He was just a chunk of flesh crying out for help and we could not do anything to help him. I still remember him very vividly.

This little boy’s image has come to represent in my mind all the innocent children who could be wiped out if there was another nuclear war.

Our conscience does not allow us to see this happening to other human being. No matter how difficult or painful it is for me, I just feel I have a responsibility to speak out.

Over time I learned to become less fearful and it is the image of my relatives and loved one and my emotional connection to them that helps me keep me going on. It is this emotion and the knowledge of what could happen that keep me going on.

Q. What would you say to young people who want to help but don't know how?

First we all have to know about the issue, the dangers of nuclear weapons. We have to study and read and learn about the problem of nuclear weapons and the history so we can understand better what needs to be done. At the same time, we must find ways not to become so horrified and overwhelmed that we are unable to take action.

No one can solve this problem alone, but together we can change things. I suggest young people start by joining an existing peace and nuclear disarmament group or you can help form your own group with others who are concerned to learn more about the problem and to find ways to take action. If you need help or guidance, your history or social studies teacher or a friend can help you find a local peace group and point you to some information to learn more.

When you feel confident enough, you can speak out and take action by doing things like making appointments for meetings with your legislators in Congress, writing letters to the editor to newspapers about the subject and what can be done, and to help make this issue visible to others around you because it a problem that affects all of us.

Citizens in the United States have a special role and responsibility because their country was the first to use nuclear weapons in war and because the United States is an influential country and is a democracy where its people have a strong voice in what its leaders do.