Authored by Kelsey Davenport on November 15, 2017

Pope Francis firmly condemned the possession of nuclear weapons for the first time at a Vatican conference on disarmament, a significant move that extends the Roman Catholic Church’s position on the immorality of nuclear weapons. 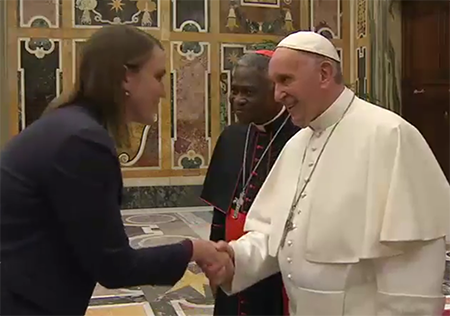 The Nov. 10-11 conference was hosted by the Holy See’s Dicastery for Integral Human Development to discuss the steps toward a world without nuclear weapons. Cardinal Peter Turkson, the head of the dicastery, warned of the “increasing drumbeat of a possible nuclear conflagration” and said that a candid conversation is urgently needed on how to move toward a nuclear-weapons-free world.

The pope’s comments reflect a notable shift on the issue of possession of nuclear weapons. While the Roman Catholic Church has consistently advocated for the abolition of nuclear weapons, it has accepted nuclear deterrence on a limited basis. The 1963 papal encyclical “Pacem in Terris” stated that minimum nuclear capability to deter a nuclear attack is acceptable as an interim ethic until disarmament is achieved. Pope John Paul II reiterated this in 1982, noting that nuclear deterrence is morally acceptable as a “step on the way toward a progressive disarmament."

Under Pope Francis, however, the church began to revisit its position on the morality of deterrence and, in a 2014 study document, said that the “use of nuclear weapons is absolutely prohibited.” At the December 2014 conference in Vienna on the Humanitarian Consequences of Nuclear Weapons, Archbishop Silvano M. Tomasi said that “reliance on a strategy of nuclear deterrence has created a less secure world,” and he called for all countries to review whether deterrence actually provides a “stable basis for peace.” (See ACT, January/February 2015.)

Pope Francis’s Nov. 10 statement at the Vatican conference directly addresses the question of possession of nuclear weapons. “If we also take into account the risk of an accidental detonation as a result of error of any kind, the threat of their use, as well as their very possession, is to be firmly condemned,” he said.

Pope Francis also noted both the humanitarian consequences of nuclear weapons and the “false sense of security” created by nuclear weapons as reasons for condemning possession. This shift was motivated by several additional factors he cited, including the high cost of nuclear weapons, and the failure to make progress on disarmament.

Gerard Powers, director of Catholic peacebuilding studies at the Kroc Institute for International Peace Studies at the University of Notre Dame, said that conference clearly indicated that the “moral imperative of nuclear disarmament” is at the center of the Roman Catholic Church’s agenda for international peace. The Kroc Institute was one of the sponsors of the conference.

Pope Francis said that nuclear disarmament is an achievable goal. “Progress that is both effective and inclusive can achieve the utopia” of a world free of nuclear weapons, “contrary to the criticism of those who consider idealistic any process of dismantling arsenals,” he said.

He and many other speakers at the conference called attention to the Treaty on the Prohibition of Nuclear Weapons, adopted in July 2017 by 122 non-nuclear-armed states, and noted its importance in prohibiting nuclear weapons and building the norm against possession. (See ACT, July/August 2017.)

The pope described the express prohibition in the treaty as filling a “significant judicial lacuna,” similar to the manner in which chemical weapons, biological weapons, and land mines are prohibited by international treaty.

The Holy See participated in the treaty negotiations and was the first state to deposit its ratification of the ban. (See ACT, October 2017.) A group of Nobel Laureates participating in the conference, including representatives from the 2017 Nobel Peace Prize winner, the International Campaign to Abolish Nuclear Weapons, issued a statement at the conference that expressed gratitude to the pope for his position and applauded his efforts to promote nuclear disarmament.

Many speakers at the conference called attention to the significance of the ban treaty, while noting additional work is necessary to advance disarmament. Ambassador Thomas Hajnoczi, who headed Austria’s delegation in the treaty negotiation, said his country will “actively seek dialogue” with nuclear-armed states and non-nuclear-weapon states in order to “broaden the common basis for taking joint further steps” toward a nuclear-weapon-free world.

Rose Gottemoeller, deputy secretary-general of NATO, also called for all states to do more to advance toward that goal, but to do so in a way that does not “jeopardize international peace and security.” The member countries of the military alliance—which rely on nuclear deterrence provided by the French, United Kingdom and United States nuclear arsenals—have rejected the prohibition treaty as dangerous.

Gottemoeller pushed back against criticism that there has been no progress on disarmament. While emphasizing that the current number of U.S. nuclear weapons remains too high and more must be done to reduce the arsenal, she said that both the United States and Russia have “reduced reliance on nuclear weapons in our nuclear strategies.”

The cost of maintaining nuclear weapons and investing in new delivery systems was also a key criticism voiced by many conference participants. Pope Francis stated that the high cost of nuclear weapons “represents a considerable expense for nations” at the expense of “real priorities facing the human family.”

The United States, for instance, is embarking on costly upgrades to its nuclear arsenal. When combined with sustainment costs, the U.S. nuclear forces will cost more than $1.5 trillion over the next 30 years.

Vatican Secretary of State Cardinal Pietro Parolin said that the church cannot “approve a debilitating arms race” and renewed a 1967 proposal by Pope Paul VI that called for all states to set aside a portion of military budgets for fund that would serve impoverished people worldwide.

Further, several speakers noted that nuclear modernization programs are sparking a new arms race. Izumi Nakamitsu, UN Undersecretary-General for Disarmament Affairs, warned that the “modernization campaigns in every single nuclear-armed State are provoking a qualitative, if not quantitative, arms race.”

San Diego Bishop Robert McElroy said that nuclear powers are on the “cusp of modernization programs that will dramatically intensify the trajectory toward proliferation and ultimately confrontation” and emphasized the Roman Catholic Church should speak with “prophetic power and certitude,” to the nuclear powers.

(A full report on the conference will appear in the December issue of Arms Control Today.)