Authored by Alicia Sanders-Zakre on October 25, 2017

Russia’s dangerous disregard for holding Syria accountable for using chemical weapons reached a new high Tuesday as Russia’s permanent representative to the UN vetoed a resolution to extend the mandate of the independent investigative body charged with assigning blame to parties that use chemical agents in Syria. 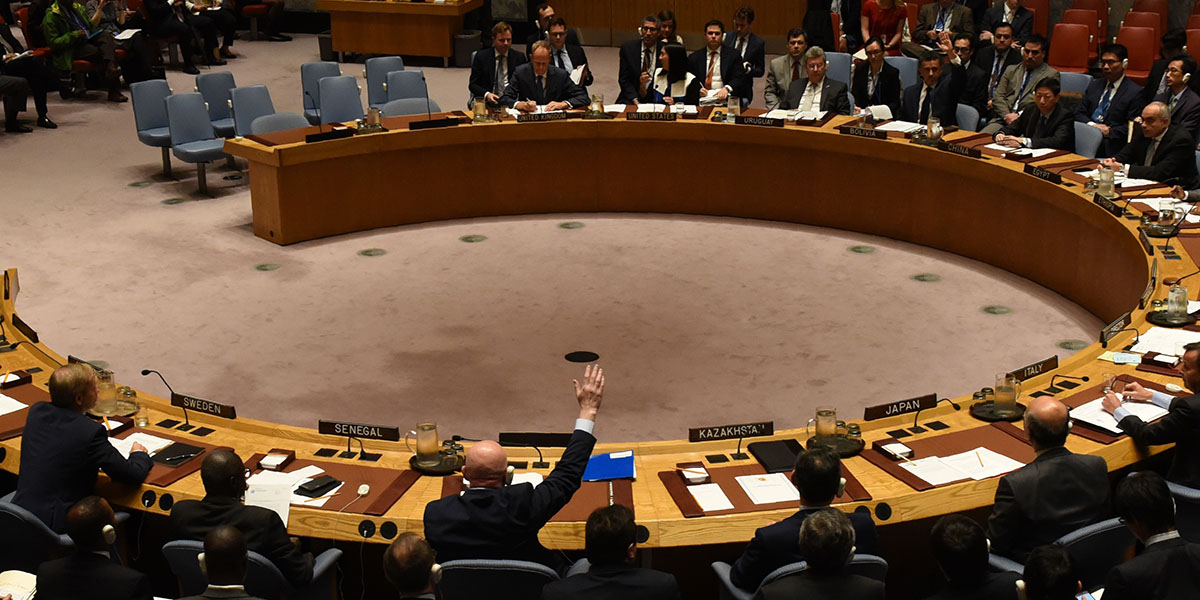 The body, known as the Joint Investigative Mechanism (JIM), is a United Nations – Organization for the Prohibition of Chemical Weapons partnership forged in August 2015 to bring accountability to chemical weapons attacks in Syria. Thus far, it has found the Assad government guilty of several chemical attacks and the Islamic State responsible for one.

Russia attempted to justify its veto by claiming it was not definitively halting the work of the mechanism, given that the JIM’s mandate does not expire until Nov. 16. Moscow’s history, however, points to a continued disregard of the necessity of the independent investigative body and its findings, a fact that U.S. Ambassador to the UN Nikki Haley pointed out. Haley rightly condemned Russia’s veto and noted that Moscow has made clear that it “does not care about stopping the use of chemical weapons in the world.”

The majority of the UN Security Council supported early extension of the JIM’s mandate for two crucial reasons: first, to avoid politicizing the investigations by basing its extension on its latest findings, expected Oct. 26, and second, after the 2016 experience, to ensure that work continues seamlessly in between mandate periods. Last year, when the United States introduced the resolution to extend the JIM’s mandate, Russia postponed the resolution for over a month. The resulting uncertainty over the body’s future caused a disruption in its work for several months.

Given the critical nature of the JIM’s work and the risks of interruption, Bolivia, which voted against the measure, and China and Kazakhstan, which abstained, also should be chastised for failing to stand up for independent investigations into the continued use of chemical weapons in violation of international norms.

Russia has also insisted on reading the JIM’s latest report identifying responsible actors for the April chemical weapon attack in Khan Sheikhoun, due Oct. 26, before deciding on the JIM’s future. This raises the concern that Russia will predicate the continuation of any independent investigation on its findings – an absurd and dangerous approach.

Russia’s claim that it requires more information on the JIM’s methodology in its latest report in order to determine if Moscow should agree to extend the mandate is a weak excuse for summarily dismissing an effective investigating body because it is dissatisfied with its findings.

Repeated Russian statements questioning the legitimacy of the investigations are further proof of its insincerity about accountability for criminal chemical attacks. Mikhail Ulynov, director of the Russian Foreign Ministry’s nonproliferation and arms control department, went so far as to call the investigations “subversion” Oct. 20. Russia’s discretization of the JIM’s independence and integrity, without even a shred of evidence to support such claims, threatens to undermine its investigative work in Syria as well as the authority of international investigations globally.

What’s more, if Russia truly were unhappy with the quality of the investigations, Russia should be the first country to suggest that the JIM mandate be extended, its budget supplemented and its authority augmented to better address the real challenges it faces. Threatening the JIM’s operation by refusing to extend its mandate on time does not solve the problems Russia claims to have with it.

The silver lining is that although Russia’s veto represents a significant setback, limited time remains to continue the integral investigations into chemical weapons use in Syria. At a time when accountability for chemical weapons use is so badly needed, the international community cannot afford for its only investigating team tasked with finding responsible parties in Syria to be sitting on the sidelines. The UN Security Council must unite in the coming days to ensure that this vital work goes on. As the Swedish representative declared Tuesday in an explanation of vote in support of extending the JIM’s mandate: “now is the time to speak with one voice.” —ALICIA SANDERS-ZAKRE