Authored by Kelsey Davenport on August 24, 2017

According to an Aug. 23 press release, Haley and Amano discussed U.S. concerns about “ensuring Iran strictly adheres to its obligations” and does not exploit “ambiguous language” in the agreement. Haley also praised the expertise of the agency and said the United States was “determined to ensure” that the IAEA has the necessary resources for verification activities. Hopefully the visit also demonstrated to Haley that Iran is subject to far more intrusive monitoring because of the JCPOA, and those mechanisms could be lost if the deal falls apart.

Iran responded to the announcement that Haley would be visiting the IAEA by sending a letter from Foreign Minister Mohammad Javad Zarif to Amano and EU foreign policy chief Federica Mogherini, who headed the P5+1 (China, France, Germany, Russia, the United Kingdom and the United States) in negotiations on the JCPOA.

In the Aug. 19 letter, Zarif noted that U.S. officials have the right to visit the IAEA and said he was confident Amano would handle any such visit with “absolute professionalism and integrity.” However, he raised concerns about the stated purpose of Haley’s trip, which was to “press the agency” over JCPOA issues. Zarif said that could “adversely affect the professional and impartial nature” of the IAEA’s work.

Before meeting with Amano, Haley told Reuters she was headed to the IAEA on a fact-finding mission to ask if the agency was getting the cooperation it needed from Iran to monitor the nuclear deal. Haley also said she would ask the IAEA if it was examining sites where Iran conducted past illicit nuclear-related activities “to make sure those issues no longer remain.” Haley said she was only there to ask questions, not push the IAEA to do anything.

Haley’s focus on questions is positive, because the United States reportedly raised with its negotiating partners the issue of pushing the IAEA to inspect military sites at a July meeting of the Joint Commission, the body set up by the JCPOA to oversee its implementation. Trump’s own comments also indicate he could be trying to ‘test’ Iran, and any refusal to allow inspections could be used as grounds to withhold an Oct. 15 compliance certification to Congress. (see below for more details on the process for requesting access to a military sites and the implications of withholding certification).

Pushing for access to undeclared sites is alarming because it is not clear that the United States has concerns about specific illicit activity that would require an inspection, nor is it Washington’s role to request access. In fact, it seems unlikely that the U.S. has any evidence of actions that violate the JCPOA, given testimony in July from Air Force General Paul Selva, vice chairman of the Joint Chiefs. Selva said that U.S. intelligence demonstrates that Iran is abiding by its commitments under the nuclear deal. The most recent IAEA report in June also points to compliance.

Statements affirming compliance by Selva also highlights the concern that Trump may try and push for inspections at military sites without evidence. This approach would undermine the deal. And, if Iran refuses, and that refusal is used a justification to withhold a certification of compliance to Congress, the JCPOA could quickly unravel, even though Iran is still abiding by its commitments.—KELSEY DAVENPORT, director for nonproliferation policy

Why Certification to Congress Matters

In a July 25 interview with the Wall Street Journal, Trump said he would be “surprised” if he could issue a certification to Congress that is tied to the nuclear deal at the next deadline Oct. 15. The certification, which must be issued every 90 days, is required by the 2015 Iran Nuclear Agreement Review Act (INARA). Trump resisted issuing the last certification in July, and he said in the same July 25 interview that he would have found Iran noncompliant 180 days ago, if it were up to him.

It is unclear from Trump’s comments what grounds he might use for withholding certification. The certification itself is broader in scope than Iran’s implementation of the nuclear agreement. It includes four determinations:

The fourth criteria in particular is a subjective assessment that lies outside the four corners of the JCPOA. The deal does not mandate proportionality between relief and restrictions, nor is there a way to objectively measure it. As a result, withholding certification does not necessarily mean that Washington is accusing Iran of violating the deal, but could start a spiral that erodes the deal.

Trump's remarks prejudging the outcome of the certification also raise serious concerns about the legitimacy of any accusation of Iranian noncompliance with the agreement. If Trump withholds certification in October over allegations that Iran is failing to meet its JCPOA commitments, it will be critical for members of Congress to request the evidence that led to the determination, carefully examine the allegations, and seek outside information, such as IAEA reports and determinations on Iranian compliance from Washington’s P5+1 partners.

Regardless of the reason, however, under the conditions of INARA, withholding certification triggers a 60-day window during which Congress can consider legislation reimposing sanctions waived by the JCPOA on an expedited basis. As a result, motions that might be used to delay the process are already ruled out of order, as is the filibuster.

Ahead of the Oct. 15 deadline there are also options for Congress to signal to Trump that his administration needs to provide information and access to intelligence if he withholds certification over allegations of Iranian noncompliance. Members could commit to holding hearings, sending a letter, and/or issuing a colloquy, defining the intention behind the provision of information in INARA to ensure that the administration provides information about why the compliance certification is being withheld. It is not clear from the legislation what standard of reporting to Congress is required in the event the certification is not issued.

Congress is not required to impose sanctions and before doing so, members should carefully consider the ramifications and risks to the future of the nuclear deal if sanctions are reimposed prematurely.

In the JCPOA, Iran states it would view reimposition or reintroduction of sanctions as grounds to cease implementing its commitments under the deal (paragraph 26). Iranian officials have clearly stated a preference for maintaining and sustaining the deal, but have reminded the international community that Iran can quickly ramp up uranium enrichment if the United States sabotages the agreement.

Politicizing Intelligence on Iran is Dangerous

David Cohen, former Deputy Director of the CIA, talked to Fareed Zakaria on the danger of politicizing intelligence on Iran. 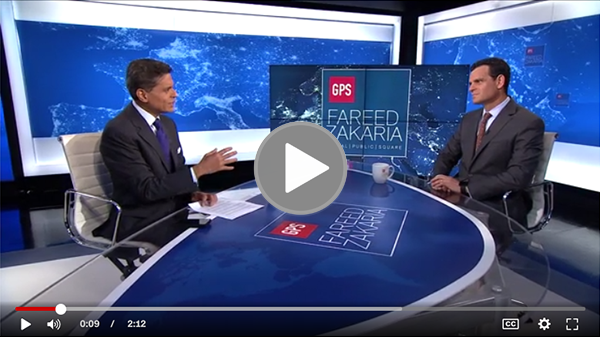 It is critical that the IAEA vigorously enforce the deal, and request access to sites if concerns emerge. But using inspections to “test” the deal, as the Trump administration implied, undermines the agreement and language in the JCPOA stating that requests should be made in “good faith” and kept to the ”minimum necessary to effectively implement” verification under the deal. These stipulations, and the specific process for accessing undeclared sites, are laid out in Annex I, Section Q of the JCPOA. Given Haley’s visit and Trump’s comments, it is worth revisiting the process.

According to the JCPOA, the IAEA must first present its concern and request that Iran provide clarifications. If the explanations and information do not satisfy the IAEA, the agency can request access “for the sole reason to verify the absence of undeclared nuclear materials and activities.”

This procedure is only for sites outside of Iran’s safeguards and additional protocol declarations. IAEA inspectors can access facilities related to Iran’s nuclear program on a regular basis. Without the JCPOA, however, the time-bound process for ensuring quick access for inspectors to undeclared sites, as well as other more intrusive monitoring mechanisms, could be lost.

It is also clear from the JCPOA that requesting access to undeclared sites, including military installations, requires cause. Haley told Reuters on her way to Vienna that she planned to ask the IAEA if it is visiting sites where past covert actions took place to “make sure those issues no longer remain.” It would be unfortunate if Haley believes that the IAEA should request access to such sites solely to verify the absence of illicit activity. That would undermine the integrity of the JCPOA by deviating from the standard set by the deal.

In addition, Washington's urging the IAEA to visit sites without evidence only to check that activities are not occurring could damage U.S. credibility. In the future Washington may have evidence or concerns about illicit nuclear-related activities at military sites. But if the United States cries wolf too many times to try and ‘test’ the deal with inspections, Washington may not get the support it would need from the IAEA in the event that U.S. national intelligence pointed to illicit activity at a covert site.

A statement signed by 47 national security leaders warned against U.S. action to withdraw from the nuclear deal with Iran, noting that any unilateral act would have “grave long term political and security consequences for the United States.”

The statement recommended that the United States develop a comprehensive policy toward Iran and refrain from actions that could put Washington in noncompliance with the nuclear deal. Some of the specific recommendations included continuing to certify Iran’s compliance to Congress, so long as Tehran is meeting its commitments, engaging in the work of the Joint Commission, which oversees the nuclear deal, and looking for options for a follow-on agreement that could be implemented after elements of the JCPOA expire.

The statement also recommended establishing senior-level communication channels with Iran and a regional consultative body to facilitate exchanges on major disputes in the region.

The CATO institute released a new report Aug. 15, Preserving the Iran Nuclear Deal: Perils and Prospects, by Ariane Tabatabai that included a number of innovative recommendations to sustain and build on the Iran nuclear deal.

In addition to meeting U.S. commitments and fully implementing the deal, Tabatabai recommends supporting EU efforts, given that Brussels has direct access to and relationships with Iranian leaders, to engage with Iran on contentious issues such as ballistic missile development and support for terrorist groups. She also argues that Washington should look for areas where U.S. and Iranian interests converge and leverage Tehran’s regional influence. Tabatabai said looking at Iran’s activities “on a case by case basis” rather than viewing everything “though a single adversarial lens” is critical.