According the official NSG website, India’s 1974 test explosion “demonstrated that peaceful nuclear technology transferred for peaceful purposes could be misused.” 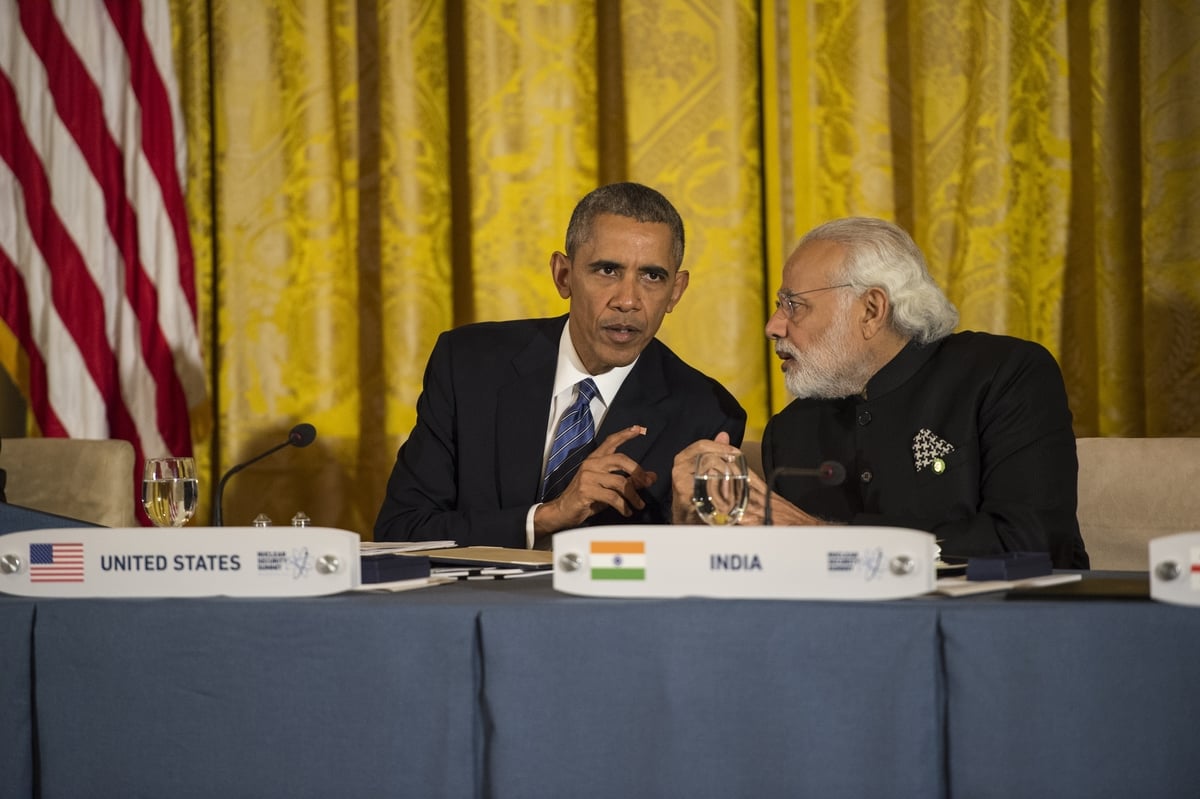 NSG membership currently requires that the state is a member in good standing with the nuclear Nonproliferation Treaty (NPT). India remains one of only three countries, with Israel and Pakistan, never to have signed the NPT.

Now, as the Obama administration enters its final month in office, the White House-led effort to strong-arm the NSG’s other member states into accepting a de minimus set of criteria that would allow entry into the NSG by India and other nonparties to the nuclear Nonproliferation Treaty (NPT) appears to have fallen short due to principled opposition from several key NSG states. NSG makes changes to its guidelines on the basis of a consensus-based decision-making process.

According to a Dec. 20 report by Jonathan Tirone of Bloomberg News, representatives of the Participating Governments in the Nuclear Suppliers Group met this week in Vienna to discuss nine general commitments India and other countries outside the Nonproliferation Treaty would need to make in order to receive the fullest atomic trading privileges, according to a two-page document prepared by Ambassador Rafael Mariano Grossi the former Chair of the NSG acting on behalf of the current Chair, Ambassador Song Young-wan of South Korea.

The meetings are informal and an official plenary won’t be convened, according to an NSG spokesman who spoke with Bloomberg News.

Leading nonproliferation analysts have argued, “any further country-specific exemptions from NSG guidelines for trade and/or membership without compensating steps to strengthen nonproliferation and disarmament would increase nuclear dangers in South Asia, and weaken the NSG and the broader nuclear nonproliferation regime."

In September 2008, the U.S. and other major nuclear suppliers pushed through an India-specific exemption from longstanding NSG guidelines barring nuclear trade with states (including India) that do not allow comprehensive International Atomic Energy Agency safeguards for all nuclear facilities. The 2008 exemption gave India access to international nuclear fuel markets, which frees its domestic uranium supplies for bomb production. Pakistan has reacted by accelerating its own fissile material production capacity and deploying highly destabilizing tactical nuclear weapons.

"New membership bids,” the analysts wrote in their June letter to NSG participating governments, "should be considered on the basis of whether states meet an agreed set of strong and meaningful nonproliferation and disarmament benchmarks.”

The discussion among the NSG’s 48 Participating Governments (PGs) regarding membership for non-NPT states accelerated after formal bids for membership from India and Pakistan were submitted for consideration at the group’s June 9 Plenary Meeting.

On Dec. 6, Grossi circulated a “revised version of a draft ‘Exchange of Notes’ for Non-NPT applicants,” a copy of which was obtained by the Arms Control Association. In his cover note, he stated, “the purpose of these notes is to provide a basis for the commitments and understandings to augment the applications of the Non-NPT applicants. This paper reflects views, comments and suggestions received.”

Grossi reported that “… there is a unique confluence of ideas on clarifying the factors for consideration of the participation of non-NPT Parties. These ideas can be encapsulated into the areas of the IAEA safeguards regime, the NPT pillars, and halting nuclear testing, as well as clarifying how the NSG addresses violations of these commitments.”

Grossi’s Dec. 6 draft note to non-NPT applicants (which has apparently not yet been delivered) sought

The formula outlined in Grossi’s draft note sets an extremely low bar on NSG membership and its wording is vague and open to wide interpretation.

Furthermore, this formula would not require India to take any additional nonproliferation commitments beyond the steps to which it committed in September 2008 ahead of the NSG’s country-specific exemption for India for civil nuclear trade.

For example, the proposed criteria for membership would simply require that India or Pakistan describe their plan for separating civilian and military nuclear facilities, which is a step that does not necessarily guarantee civil nuclear technology transfers will not benefit the military sector, and it is a step India has already taken.

It is no wonder that responsible NSG states have lodged comments and objections to both the substance of the proposed membership criteria and the process for trying to forge a meaningful consensus on the criteria for membership for non-NPT states.

There are many issues to consider before granting non-NPT states membership in the NSG to ensure the process, on balance, strengthens rather than erodes global nonproliferation standards. (See: “Toward a Nuclear Suppliers Group Policy for States Not Party to the NPT,” by Mark Hibbs, Carnegie Endowment for International Peace, Feb. 12, 2016.)

Among the most important of these factors are the NSG membership criteria relating to nuclear text explosions and the CTBT.

Even though every current member of the NSG has made a legal commitment not to conduct nuclear explosive tests by signing the CTBT, the draft formula would not even establish that signature of the CTBT is required for membership.

This would undercut the recent UNSC resolution (2310) which calls upon remaining hold out states, including India and Pakistan, to sign and ratify the CTBT, it recognizes the value of the CTBTO’s monitoring system, and notes that a nuclear test explosion would violate the object and purpose of the treaty. UNSC 2310, first proposed by the United States, was endorsed by 42 states, including many NSG members, as well as Israel.

If the NSG fails to establish that signature of the CTBT is one of the key criteria for membership, its participating governments will have squandered an opportunity to incentivize Indian and Pakistani signature of the treaty.

Though India and Pakistan have each declared a unilateral moratorium on nuclear test explosions since their tit-for-tat series of tests in 1998, neither has committed to making the legally-binding step of signing the treaty, which has been signed by 183 countries.

Signature of the CTBT by either India or Pakistan would still allow them the legal right under the treaty’s supreme national interest withdrawal clause to reverse policy if the other country did resume nuclear testing in the future; however, signature by New Delhi and/or Islamabad would demonstrate good faith, would be consistent with the behavior expected of responsible states, and would help strengthen the global nonproliferation regime.

Grossi’s Dec. 6 draft note also says that in the event of a nuclear test explosion by a member state, consultations among NSG countries could lead to suspension of cooperation and expulsion, but doesn’t note whether these steps would be automatic:

“… under [current] NSG Guidelines, should any Participating Government conduct a nuclear explosive test, detonate a nuclear device of any type, or violate its safeguard agreements with the IAEA, the NSG will initiate consultations … which can result in the suspension of all transfers, and consideration of other actions including termination of membership.”

This falls short of the standard established through Japan’s recent agreement with India. According to an agreed side note of the new Japan-India civil nuclear cooperation agreement, a nuclear test explosion by India would result in automatic suspension of nuclear cooperation with Japan. (See “Japan Signs Nuclear Accord With India,” Arms Control Today, December 2016.)

It is also notable that in a Nov. 16, 2006 colloquy with Sen. Richard Lugar (R-Ind.) then-Senator Barack Obama sought to clarify that, under the terms of the legislation to allow U.S. civil nuclear trade with India, “in the event of a future nuclear test by the Government of India, nuclear power reactor fuel and equipment sales, and nuclear technology cooperation would terminate.”

If the NSG membership criteria do not make it clear that a nuclear test explosion will result in automatic expulsion and a termination of nuclear trade, the NSG will have lost an opportunity to enforce the global norm against nuclear testing.

To avoid the possibility that India might, on the basis of purely political reasons, block a future Pakistani bid to join the NSG, Grossi’s draft note proposes that one non-NPT member state should reach an understanding not to block consensus on membership for another non-NPT member state.

However, Pakistan still has grounds to object to the formula outlined by Grossi because it would require Pakistan to meet the same criteria for membership but, to engage in civil nuclear trade with NSG states, would have to win a separate NSG exemption from the full-scope safeguards requirement.

Under the formula described in Grossi’s Dec. 6 draft note, India could theoretically claim that it has already undertaken all of the steps necessary for membership, which could then lead to a decision on membership for India, while still leaving Pakistan in a different status.

If adopted, this approach would severely undermine the nonproliferation regime and further damage the credibility of the NSG. It would caste a dark shadow over President Obama’s nuclear nonproliferation and disarmament legacy.

Another India-specific NSG exemption would undoubtedly move Pakistan in the wrong direction, hardening its resolve to keep pace with India’s ongoing nuclear weapons buildup. It would likely worsen China’s own NSG-noncompliant nuclear trade with Pakistan and make it more difficult to gain other states’ adherence to NSG trade control guidelines. Indian membership in the NSG would also reinforce the perception among NPT member states that the rules just do not apply to nuclear-armed states.

It is vital that responsible NSG member states do not buckle under the pressure from the outgoing Obama administration to adopt such a low bar for membership. Instead they should utilize the process to reinforce and strengthen nonproliferation standards and ensure they apply to all states, without exceptions.

In April 2016, President Obama said he would “like to see progress with respect to Pakistan and India to make sure…they are not continually moving in the wrong direction.”

The proposed formula for NSG membership by non-NPT states described in the Dec. 6 document would move the NSG and the nonproliferation regime in the wrong direction.