Authored by Kelsey Davenport on September 15, 2016 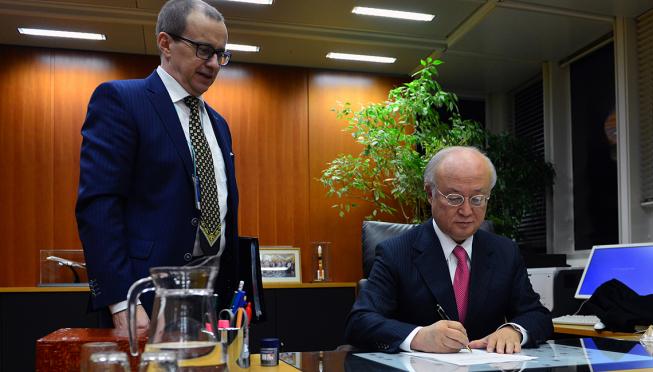 The International Atomic Energy Agency’s (IAEA) September quarterly report on Iran’s nuclear program confirms that Iran is continuing to abide by the limitations put in place under the July 2015 agreement reached between Tehran and the P5+1 (China, France, Germany, Russia, the United Kingdom and the United States) group of states.

While it is unfortunate that the IAEA does not report publicly on every restriction put in place by the Joint Comprehensive Plan of Action (JCPOA), Iran’s continued compliance is encouraging.

The September 8 report noted that

The report also provided some new information on Iran’s nuclear activities since the last IAEA report in May. The September report noted that Iran removed 96 IR-1 centrifuges from the storage area at Natanz to replace damaged centrifuges that were enriching uranium. As part of the agreement, Iran moved 13,000 centrifuge machines into monitored storage.

Iran also reported to the IAEA the amount of enriched material uranium contained in the process lines at its Enriched Uranium Powder Plant, which was used before the deal to convert enriched uranium gas into powder for fuel fabrication. Iran and the IAEA are discussing Iran’s report on the quantities of uranium recovered, after the IAEA determined Iran overestimated the amounts.

Like any complex arms control agreement, the JCPOA could not anticipate every technical challenge or ambiguity that might arise over the course of implementing the agreement. The creation of a Joint Commission (comprised of representatives from the P5+1 countries, Iran and the EU) as part of the agreement to assess and solve these issues as they emerge is an innovative feature of the deal.

When the Joint Commission makes decisions to rectify ambiguities or technical challenges, such as allowing Iran to operate larger hot cells (shielded boxes that can be used to separate plutonium and/or for extracting radioactive isotopes) or designating uranium waste material as exempt from the 300-kilogram limit as reported by the Institute for Science and International Security, it is critical to assess them in the context of the agreement and Iran’s larger nuclear program.

These two cases, for instance, do not threaten the overarching goals of the nuclear agreement, which include increasing to more than 12 months the time it would take Tehran to produce enough nuclear material for a warhead and putting in place stringent monitoring and verification measures to quickly detect any move toward nuclear weapons. Iran is prohibited from using hot cells, or other reprocessing technologies, for separating plutonium under the deal for 15 years. Additionally, the deal clearly states that Tehran can operate larger hot cells with the approval of the Joint Commission. Given the monitoring and verification on Iran’s enrichment facilities and stockpiles of enriched uranium, if Tehran were to try and extract uranium from the waste, it would be quickly detected. Both cases also demonstrate the Joint Commission acting in its designed capacity-making decisions to solve issues as they emerge.

While more information about the decisions made by the commission could promote greater public confidence that the terms of the deal are being met, given the sensitivity of the information involved, it is not surprising some of the decisions remain confidential, as permitted under the JCPOA’s conditions.

The latest IAEA report on Iran’s nuclear program confirms that the country is complying with the limits imposed by the 2015 nuclear deal.

If fully implemented, the JCPOA will block Tehran’s pathways to nuclear weapons for the next decade. It is critical that the IAEA continues to have the resources necessary to monitor and implement the deal and that as challenges the agreement emerge, all parties work together toward constructive solutions.