Today, in a solemn and moving ceremony in Hiroshima’s Peace Park, U.S. President Barack Obama along with Japanese Prime Minister Shinzo Abe offered wreaths at the Cenotaph Memorial, which honors the victims of the world’s first atomic bombing.

With his visit, Obama became the first serving U.S. president to personally confront the painful stories, complicated history, and inspirational demands of the hibakusha never to allow the atomic bombings of Hiroshima and Nagasaki to be repeated ever again. 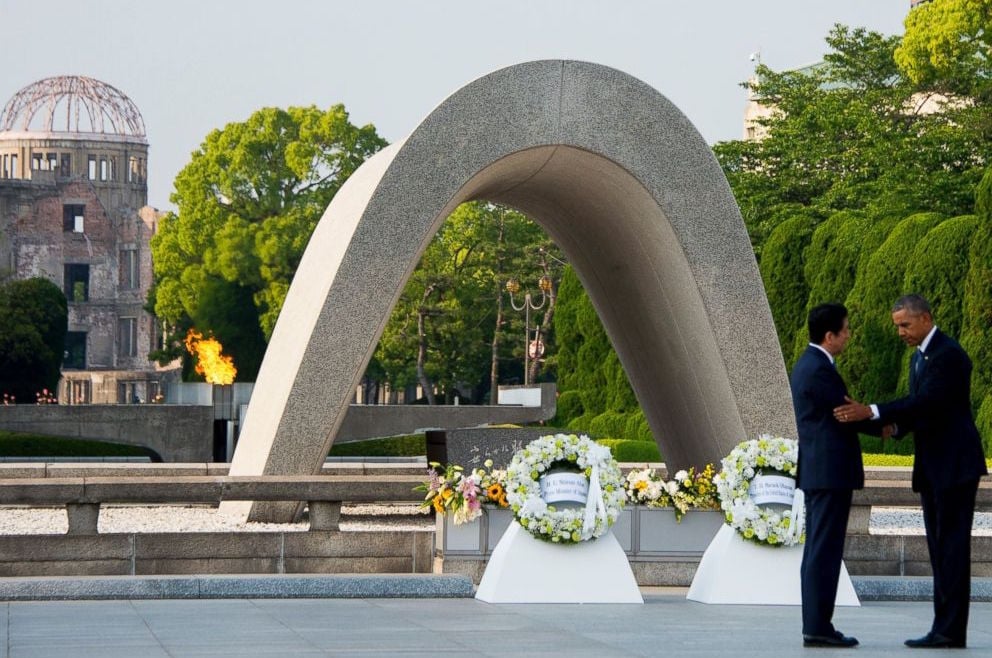 Following the wreath-laying, Obama and Abe spoke before an audience of dignitaries, a small number of survivors from the bombing, and the present-day mayors of Hiroshima and Nagasaki.

Obama began by asking and answering the question, “Why do we come to this place, to Hiroshima?”

“We stand here in the middle of this city and force ourselves to imagine the moment the bomb fell,” Obama said. “We force ourselves to feel the dread of children confused by what they see. We listen to a silent cry. We remember all the innocents killed across the arc of that terrible war and the wars that came before and the wars that would follow.”

“Mere words cannot give voice to such suffering,” he noted. “But we have a shared responsibility to look directly into the eye of history and ask what we must do differently to curb such suffering again.”

In a powerful symbol of remembrance and reconciliation, the president spoke briefly with two of the survivors of the Hiroshima and Nagasaki atomic bombings following the formal remarks.

“Some day,” Obama noted in his address, “the voices of the hibakusha will no longer be with us to bear witness. But the memory of the morning of August 6, 1945, must never fade. That memory allows us to fight complacency. It fuels our moral imagination. It allows us to change.”

“Technological progress without an equivalent progress in human institutions can doom us,” the president warned. “The scientific revolution that led to the splitting of an atom requires a moral revolution as well.”

In the United States, Kerry’s visit was praised by leading members of the Democratic Party, including House Minority Leader Nancy Pelosi who visited Hiroshima herself in 2008, while serving as House Speaker. Leading U.S. newspapers such as The New York Times and The Washington Post urged Obama to visit Hiroshima at the time of the G7 summit, and to outline further concrete actions to reduce the nuclear weapons threat.

Obama’s decision to visit Hiroshima, which was announced May 10, revived some of the lingering debate about the decision by President Harry Truman to drop the atomic bomb on Hiroshima and Nagasaki—and whether the surprise bombings, which came at a time when Japan was on the verge of surrender, were morally and militarily justifiable.

In response to question in a May 20 NHK interview about the Truman’s decision, President Obama said: “I think that it's important to recognize that in the midst of war, leaders make all kinds of decisions. It's a job of historians to ask questions and examine them, but I know as somebody who has now sat in this position for the last seven and a half years, that every leader makes very difficult decisions, particularly during wartime.”

According to a 2015 Pew Research Center survey public attitudes about the 1945 atomic bombing is shifting, with a large generation gap among Americans. The Pew survey found that the share of Americans who believe the use of nuclear weapons was justified is now 56%, with 34% saying it was not. In Japan, only 14% say the bombing was justified, versus 79% who say it was not.

Seven-in-ten Americans ages 65 and older say the use of atomic weapons was justified, but only 47% of 18- to 29-year-olds agree. There is a similar partisan divide: 74% of Republicans versues only 52% of Democrats see the use of nuclear weapons at the end of World War II as warranted.

Obama’s historic visit to Hiroshima not only put a spotlight on the continuing risks posed by nuclear weapons and war, but also on U.S. nuclear policies and actions and the work left to be done to fulfill Obama’s stated goal of “the peace and security of a world without nuclear weapons.”

During his visit to Japan, Obama has acknowledged that existing U.S. and global nuclear weapons capabilities are already more than enough and we should be encouraging investments in human development not more nuclear weapons. Yet, his administration is pursuing a costly, all-of-the-above plan to maintain and upgrade U.S. nuclear forces at force levels that exceed U.S. nuclear deterrence requirements. He still has the opportunity to adjust, delay, or cancel some of these programs, with the goal of putting a brake an emerging global arms race toward more advanced nuclear capabilities.

Obama has also repeatedly expressed his support for closing the door on nuclear testing, yet his efforts to secure U.S. ratification of the 1996 Comprehensive Test Ban Treaty (CTBT) have fallen short. Will the president pledge to work with other states at the United Nations or elsewhere to advance the prospects for the CTBT and reinforce the norm against further nuclear testing as some experts and governments suggest?

In his Hiroshima address, Obama did not offer any new initiatives or proposals, but he said, “… among those nations like my own that hold nuclear stockpiles, we must have the courage to escape the logic of fear and pursue a world without them.”

“We may not realize this goal in my lifetime,” he continued, “but persistent effort can roll back the possibility of catastrophe. We can chart a course that leads to the destruction of these stockpiles. We can stop the spread to new nations and secure deadly materials from fanatics.”

We can and we must. In the coming weeks and months, Obama must use the power of his office and the powerful message of Hiroshima to propose and push for further, common sense steps that would help move the United States and the world closer to the peace and security of a world without nuclear weapons.